Of Three Equals One... 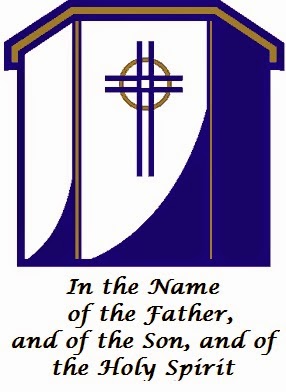 TRINITY SUNDAY celebration invites us to consider final instructions given by our Lord during his earthly ministry. In the Gospel According to Saint Matthew we read of the mandate given to the disciples. The command was given as a centrally-placed yoke across the shoulders of the infant Church. As well, though historically doubted by some mathematically-challenged scholars, in this text we hear the normative name of God used by the Church today …

Now the eleven disciples went to Galilee, to the mountain to which Jesus had directed them. And when they saw him they worshiped him; but some doubted.
And Jesus came and said to them, “All authority in heaven and on earth has been given to me. Go therefore and make disciples of all nations, baptizing them in the name of the Father and of the Son and of the Holy Spirit, teaching them to observe all that I have commanded you; and lo, I am with you always, to the close of the age. (Matthew 28:16-20)

First Steps in Faith…
Our lesson comes to us recorded by the church of Matthew alone, though Luke’s writings relate a similar parallel reading (Luke 24:36-49). As well a disputed earlier text reveals some similarities likely added to Mark’s earlier, original gospel (Mark 16:15-18). We note that in this gospel, however, Matthew does not relate to us a lengthy dialog of the meetings that Jesus had with the ten disciples in the Upper Room... but rather used precious scribal resources to tell us of this mountaintop meeting. As well, Matthew’s emphasis does not tell us of the encounter between Jesus and the men on the Emmaus road. Instead, in the gathering of eleven disciples Matthew tells us of our Lord's doings just prior to the Ascension.
The ancient Church thus struggled to describe this event in which Jesus Christ provided his instructions to his followers. From that wondrous time therefore, we of the Church who are his followers today must also note with interest… how the infant church of Matthew located in Antioch of Syria, preserved the importance of the scene through the first five decades of gathering.
First note that we may easily accomplish a close identification with those early disciples. They remind us of ourselves. As Jesus appeared before them, a mystical tone likely impressed them. It was so mystical that the word portrait Matthew gives us here tells that when they saw him.., some doubted what they were witnessing. Consequently we are reminded that in this mystical setting, gathered people heard several reports. They walked together but met in confusion. Thoughts were clouded; remembrances searched. When Jesus appeared before them…. especially to blessed Peter, the scene could have seemed reminiscent of the Mount of Transfiguration. Indeed some were unsure. We ask as well, “Were they also unsure of the Resurrection?
This last is unlikely, since they had been with our Lord in the Upper Room. But were they were likely thinking that they were now seeing a ghostly apparition? The text reflects about the doubts of faith expressed by Thomas in the Upper Room, so they asked was this the flesh and blood Jesus before them?


Today we might try to explain this event scientifically, discounting the Resurrection and considering the confused followers as victims of mass hysteria. Across the centuries, however, though we do not know the subtle innuendo that was meant by the Matthean writer... these words about doubters were written,  I consider now that because we are today the Church who receives the power of the Holy Spirit, like those first disciples... we do know of the faithful Truth. Why is this so? Just follow the scriptural authority and consider that Jesus told the disciples of this. Recorded earlier in Matthew, he had claimed…

This earlier witness echoed here, is also present in Luke (Luke 10:22), but was not in the earlier written Gospel of Mark. Thus the text mentioned likely comes to us from the lost “Q” document, as reconstructed by biblical scholars. The “Q” document thus recalls for us a prophetic statement written two centuries earlier, as spoken by prophetic record…
“I saw in the night visions,
and behold, with the clouds of heaven
there came one like a son of man,
and he came to the Ancient of Days
and was presented before him.
And to him was given dominion
and glory and kingdom,
that all peoples, nations, and languages
should serve him;
his dominion is an everlasting dominion,
which shall not pass away,
and his kingdom one
that shall not be destroyed.”
(Daniel 7:13-14)

Matthew’s script subsequently related to those in the early Church that all authority had indeed been given to Jesus, just as prophesied. This did not come to the Church… nor any denomination, sect, or person... separate from our Lord. We of the Church are not therefore, to impose any thought or words upon this Truth of scripture nor distort Jesus’ instructions. We are the finite, graciously meant to receive the Spirit of the Infinite. Certainly, Matthew stressed thus in that disciples are called to follow our Lord’s specific instructions.


Indeed, a few decades before this writing, St Paul had declared this fact. Shortly after the Resurrection and Ascension of Jesus, Paul had been knocked from his high temple horse and became an apostle sent by Jesus Christ. It was Paul who then attested of Jesus’ authority. Paul received his command from Jesus on the road to Damascus, a city near the early church of Antioch. Some twenty years after that event, between 55-65A.D., Paul wrote in this letter to the church in Phillipi of Asia Minor…

Therefore God has highly exalted him and bestowed on him the name which is above every name, that at the name of Jesus every knee should bow, in heaven and on earth and under the earth, and every tongue confess that Jesus Christ is Lord, to the glory of God the Father. (Phillipians 2:9-11)

Subsequent from this letter we may entertain that after the ministries of Paul and Peter had ended in martyrdom, the Church needed to grasp firmly the centrality of its apostolic mission. Thus it seems that the community in Antioch, the community that had given support and substance to the early apostolic witness… related this central message of Jesus. They remind the disciples clearly from this text written about 85AD, that from the beginning of their ministry together our Lord had told the disciples to preach, baptize, and teach!


We see that the collective mission came not from the fact that members of the Church had a common history and mutual constitution, nor apostolic Council, nor a Petrine priority that had been founded from a time prior to his crucifixion, … but the instruction was given to the whole Church from our living Lord Jesus himself. No amount of modern, high textual criticism can overshadow this text,
Coming to us in Trinitarian power, we see that God related these instructions to us. They tell us to declare the Good News. They do not include social ministries nor political action committees. Though this other types of outreach may be important to us… they were developed later by the Holy Spirit, and are not the first order of who we are called to be!
Matthew’s church in Antioch of Syria is recorded in the Acts of the Apostles as the first to be called Christians. They had already developed a rich theology by the time of this gospel writing. Their developed doctrine stemmed from the early teachings of Paul and Peter. I believe the apostolic learning and testimony had therefore already established the use of the Trinitarian name of God used at baptism. This is the three-legged theological seat firmly planted for the whole Church.

Three that We May Be One...
Jesus gave the Church its authority to do all of these things from the very beginning of their apostolic ministry, and we rightly note the singularity of power. We note rightly that Matthew’s scribe clearly uses “name of the Father, and of the Son, and of the Holy Spirit”, as the singular authority… just as attributed  by the Davidic Psalmist (see Psalm 124:8). In other words, we act in the possession and protection of the unity in Trinity, expressed as Father, Son, and Holy Spirit. Thus anyone who is called to preach, baptize and teach in the name of God is a person that does so by the power and authority of the singular, God…. Father, Son, and Holy Spirit. We are not to suffer modalism, but cling to unity in Trinity. It is the “name of”, not “names of”.., thus this text clearly impressed the early formula for our inherited Christian theology.
The early church in Antioch and churches raised up since then yet struggle in the Spirit to express this largely inexpressible Truth to the outside world. Indeed, as Christians we are called to first do these central tasks… preaching, baptizing, and teaching. We are called preach the Word in both the Law and the Gospel. We are to baptize using the name of God, supplied to us here by Jesus through his church at Antioch. We are to teach our faith to children. By the power of the Holy Spirit, we are thus to follow the instructions given to our forebears. We are to love God and love one another, knowing that our Lord Jesus is always with us. It is the Spirit which proceeds from the Father and the Son to authenticate our work when we do these things in faith.

You see brothers and sisters in Christ, we also are among those called to the mountainside… to the altar of the eternal Church where disciples gather. There we hear the Word proclaimed even though some yet doubt. Confessing at the footstool of our Creator and gathered at the base of the cross in spite of sin and unbelief, the Holy Spirit saves us as forgiven disciples and we become one with our Lord. God miraculously comes to us gracefully through Holy Baptism and Holy Eucharist. Yes, I say again… Jesus, the Christ of God the Father, though the power of the Holy Spirit… is always with us. Just as he promised… thanks be to God.

For insight into the will of God for the Church, please venture to view... Trinity? Go Figure!


May the Lord bless you and keep you!