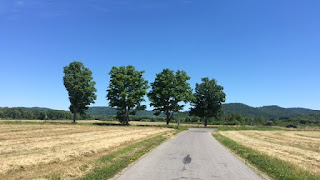 OUR GOSPEL reading for the Third Sunday in Easter relates Jesus’ travel on the road with two disciples. According to Luke, this event happened just after our Lord's Resurrection, but before he met with his hidden disciples. Please know that this topic also has previous editorial covering the faith walk, at:

What Do You Talk About?

That very day two of them were going to a village named Emmaus, about seven miles from Jerusalem, and talking with each other about all these things that had happened. While they were talking and discussing together, Jesus himself drew near and went with them. But their eyes were kept from recognizing him.
And he said to them, “What is this conversation which you are holding with each other as you walk?” And they stood still, looking sad. Then one of them, named Cleopas, answered him, “Are you the only visitor to Jerusalem who does not know the things that have happened there in these days?”
And he said to them, “What things?”
And they said to him, “Concerning Jesus of Nazareth, who was a prophet mighty in deed and word before God and all the people, and how our chief priests and rulers delivered him up to be condemned to death, and crucified him. But we had hoped that he was the one to redeem Israel. Yes, and besides all this, it is now the third day since this happened.
Moreover, some women of our company amazed us. They were at the tomb early in the morning and did not find his body; and they came back saying that they had even seen a vision of angels, who said that he was alive. Some of those who were with us went to the tomb, and found it just as the women had said; but him they did not see.”
And he said to them, “O foolish men, and slow of heart to believe all that the prophets have spoken! Was it not necessary that the Christ should suffer these things and enter into his glory?”  And beginning with Moses and all the prophets, he interpreted to them in all the scriptures the things concerning himself.
So they drew near to the village to which they were going. He appeared to be going farther,  but they constrained him, saying, “Stay with us, for it is toward evening and the day is now far spent.” So he went in to stay with them.
When he was at table with them, he took the bread and blessed, and broke it, and gave it to them. And their eyes were opened and they recognized him; and he vanished out of their sight.
They said to each other, “Did not our hearts burn within us while he talked to us on the road, while he opened to us the scriptures?”  And they rose that same hour and returned to Jerusalem; and they found the eleven gathered together and those who were with them, who said, “The Lord has risen indeed, and has appeared to Simon!”
Then they told what had happened on the road, and how he was known to them in the breaking of the bread.
(Luke 24:13–35)

With and Not Recognized?
Our gospel writer stated that two of the Lord’s disciples were leaving Jerusalem after the crucifixion, death and Resurrection of Jesus. However, they were unaware that the latter had occurred. They were walking toward Emmaus and discussing the crucifixion events. That they were indeed among our Lord’s disciples is made evident in that one of them was named with certainty as Cleopas. This name correlates closely with the name used to describe a woman noted in the Gospel According to Saint John. In John, as an observer of Jesus’ death upon the cross, that woman was named as the wife of Clopas. Subsequently, though some discussion has been held amongst scholars over the difference in spelling between the two names, I offer that the textual difference exists in scriptural accounts only because of the spelling preferences within the two disparate sources of gospel authorship.
Here I contend that one of the men was clearly one named to the Lukan community as a disciple, and the other was at least awarded the status of a knowing companion. Both men were walking that short distance from Jerusalem, likely in sullen spirit while deeply disappointed with the recent happenings. They were probably stopping occasionally to discuss the matter at great length. According to Luke, that is when Jesus joined them. Yet, though at least one of them had likely seen Jesus previously and recently... neither of the men recognized him.
It is in this elemental stage of grief that we find our Lord became present, but was not recognized. As Jesus began to question them concerning their dialog, he received confirmation concerning that which he most likely knew. In trying to comprehend the failure of the one person who they thought was the Messiah, they were likely as sinful as any in examination of the intrigue that had led to his death and burial. Discussion concerning the political turmoil likely ensued, leading to yet another stage of grief. They may have been laying the blame for Messianic failure. Who was at fault? The Pharisees? Sadduccees? Zealots? Sanhedrin? Rome? Were they at fault? Or was Jesus at fault? Was he not the Messiah?


Bargaining?
It was apparently within this context that Jesus interrupted them using a certain amount of disdain. It seemed because of failures in both mind and heart, that they were leaving out the one source of solidity for their understanding of the historical flow. They were ignoring the prophetic value of the Hebrew scriptures! They were doing what so many of us mirror in today’s world. The two men were traveling as sullen and disheartened, fearing no changes made in a sin-ridden society.
Therefore, we read that Jesus took them through a tour of Messianic prophecy that spoke of his arrival, teachings, miracles, death and burial... and the predictions concerning his Resurrection. What was our Lord doing? Our Lord was reminding them about looking at the divine flow of human salvation as stated in the Word, by the Word!
Exactly! Here is the message that we who are still walking and talking beneath the demonic railings of political ignorance, pandemic illnesses and approaching deaths need to be reminded of... our Lord said upon the cross... “It is finished.” All prophecy concerning the Messiah... the Annointed Deliverer... have been fulfilled.


Acceptance!
We note that when the evening then came upon them... a time of darkness and foreboding... they invited Jesus to stay with them. We need to do the same. They treated him as a guest, and he said a great prayer of thanksgiving while they reclined at the table. We need to do the same.
Then it was revealed to them that this was the real body and blood of Jesus, unrecognizable without the Word... they ate with him. And then they were left alone with the Good News... Jesus is Risen; Risen Indeed! Go tell others.

We invite you to view this offering concerning the gospel revelation and our present circumstances...

May the Peace of God that surpasses all human understanding
keep you hearts and minds in Christ Jesus, Our Lord.
Posted by TeeJay at 12:11 PM No comments: