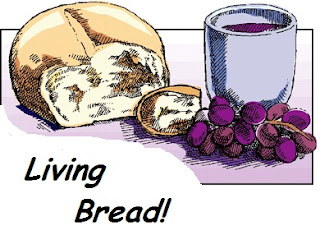 The Twelfth Sunday after the Feast of Pentecost brings us to examine a lesson within the Gospel According to Saint John. In this text we hear about our Lord telling the Jews in his home environment of his being the “Bread of Life”. We thus explore the impact of these words upon the established religious world of that day. While the amount of text being read this week varies according to the lectionary a church may use, here we note the commonly used portion conveyed by Jesus to the Jews of that day. We read…

The Jews then murmured at him, because he (Jesus) said, “I am the bread which came down from heaven.”
They said, “Is not this Jesus, the son of Joseph, whose father and mother we know? How does he now say, ‘I have come down from heaven’?”
Jesus answered them, “Do not murmur among yourselves.
No one can come to me unless the Father who sent me draws him; and I will raise him up at the last day. It is written in the prophets, ‘And they shall all be taught by God.’ Everyone who has heard and learned from the Father comes to me. Not that anyone has seen the Father except him who is from God; he has seen the Father.
Truly, truly, I say to you, he who believes has eternal life. I am the bread of life. Your fathers ate the manna in the wilderness, and they died. This is the bread which comes down from heaven, that a man may eat of it and not die. I am the living bread which came down from heaven; if anyone eats of this bread, he will live forever; and the bread which I shall give for the life of the world is my flesh.”
(John 6:41-51)

Living Bread…
Members of the faith community where Jesus lived murmured thoughtfully concerning his words. Likely gathered in the synagogue they spoke with one another and to him, grumbling about the radical phrases he declared. First, they noted that he used an unfamiliar phrase to liken himself to the bread (manna) that had come down from heaven, food that laid on the ground when Moses led the people of Israel from bondage in Egypt. This image recalled from their memory the event that we find as recorded in Exodus, Chapter 16.
Thinking strictly in physical terms of bread then, it seems that without considering the spiritual meaning of the miraculous occurrence, they missed the taste of Jesus’ spiritual language. This was not unusual for the time, for within that ancient society nearly all things were concretely defined by their function. You see, to all, bread was to eat.
This mindset they zealously held had been established by heritage and tradition. Some in the synagogue likely had recently received the miraculous bread from Jesus on the Galilean hillside. Then Jesus responded to their concrete reasoning and short-sightedness by reminding them that like their ancestors they now murmured against God's divine providence. They did not recognize the gracious meal that was being laid out before them. Our Lord said that he was the "Bread of Life", and the ability to know his identity as this Bread was reserved for persons chosen by the Father. These the Father would “draw’ unto himself. This term “draw” (ἑλκύσῃ in the Greek) used in the text by the writer of this gospel, was a term holding multiple meanings. However, here this sort of drawing according to Martin Luther, was a  “…gracious allurement, such as that of the man whom everybody loves, and to whom everybody willingly goes.”
Those that believed his words, therefore, who loved according to the will of the Father... were drawn by the Truth. Willingly called forth in faith into the abstract, they could hear beyond hearing. Confounding the unbeliever’s minds was that startling abstract imagery Jesus used to describe himself. Their reaction amplified as they clung to the accepted worship traditions of Israel.
Many of the Jews listening to our Lord on that day opted only to remember the legalistic scriptural dietary restrictions given during the settlement of Israel. They surely recalled the ancient cereal offering of grain that was used by citizens to make bread. They recalled the warnings against eating of sacrificial animals, grain and especially the blood. We call this text from the time of the patriarchs…

Thus we find here a great disturbance that likely occurred in the minds of those Jews who were with Jesus on that day. You see, many who heard Jesus were already invested in the sacrificial system of Israel. These were likely who mumbled and grumbled, and depended on keeping to those ritual practices attended to by the so-called pious ones in the Temple. The offerings they made via priests in those hallowed halls were their justifying works righteousness. The sacrificial system was one of frequently repeated ritual in which some persons often paid great donations in order to participate. They surely mirror those of us who invest ourselves today in a certain Christian denominational expressions, a certain pastor, a given church, a particular pew or seat, or memorial made. By doing so we tend to puff ourselves up, murmuring against the freely given Bread of Life.
When they heard Jesus’ words, therefore, the synagogue leaders remembered that the Passover indeed was approaching. The Feast of the Unleavened Bread was to be upon them. Tradition was founded by the elders, and yet Jesus thus revealed the radical free grace of God. He especially revealed this Truth to those faith-filled persons who were chosen by the Holy Spirit. These few would eventually come to complete understanding. These chosen few were those who were taught by God in faith, because they had witnessed the acts of God done through Christ Jesus.
You see, the complete recipe of divine Bread would be yeasted to its full expression only after the crucifixion and Resurrection of our Lord. Raised then by the Spirit, these followers more firmly believed and were blessed. They were to reveal that believing disciples were already given eternal life.

Gather, Take and Eat!
Jesus clearly proclaimed to all those gathered around him that he was the Bread of Life. The grain offerings and such they presented at the Temple were soon to be of no avail. By stating this, our Lord dedicated himself as the offering. He became willingly consumed in his task to go to the cross. Additionally, Jesus would before the end of that very century, be consumed by those who daring enough to live in faith during the turbulent times of John. You see, for them to be chosen by God as gracefully elected to receive the revelation… was to be present for the eating the Eucharistic bread of thanksgiving. The words of Institution remembered and repeated became a gracious gift come down to us. Thus from the Last Supper, “Take and eat, this is my body…” echoed across the infant Christian church. What is more so, by our author’s writing of this great mystery, and our own reading of such, we in the Church today also come to know that this is the same Bread. This is the Sacrament of the Table that we in the Church receive in these modern days. The Bread of Life comes to us. Christ Jesus our Lord is in, with, and under that gracious physical bread we receive together as his gathered community.
Undoubtedly as the Church struggles against heresies abounding, we today need to hear again that Jesus Christ is the forgiving manna who comes to us by the power of the Holy Spirit. He sustains our lives in this modern wilderness. Jesus, who is the Bread of Life, was kneaded by our sinful fists and stricken by the whip. He was thereby scored for the furnace of hell as he was offered up in the fiery ordeal of the cross.
Indeed Jesus, the Son of Man and Son of God, baked in the afternoon’s hot sun that beat down so harshly upon Golgotha. Yet even knowing this was all to come, he offered himself up as the Bread of Life, even unto death.
Consequently we stand as admonished and pardoned. We know that those of us who believe and eat of his Body shall live forever. This is the Good News provided by this lesson, and we are thus called to always proclaim that he is the Bread of Life. I repeat to you in the Spirit therefore, that together we need say... “Lord give us this bread always.”

Know That You Are Welcomed To The Lord's Table!