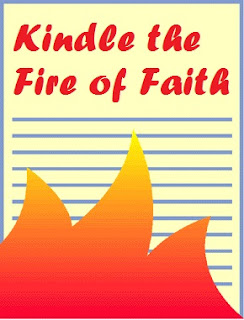 ACCORDING TO LUKE, our reading for the Thirteenth Sunday after Pentecost comes to us as a warning from Jesus. His words spoken back then concerned the schismatic effects surrounding his mission. These would call his disciples, and we ourselves who walk in their footsteps… out as a separate entity from the world.

"I came to cast fire upon the earth; and would that it were already kindled! I have a baptism to be baptized with; and how I am constrained until it is accomplished! Do you think that I have come to give peace on earth?
No, I tell you, but rather division; for henceforth in one house there will be five divided, three against two and two against three; they will be divided, father against son and son against father, mother against daughter and daughter against her mother, mother-in-law against her daughter-in-law and daughter-in-law against her mother-in-law."
He also said to the multitudes, "When you see a cloud rising in the west, you say at once, 'A shower is coming'; and so it happens. And when you see the south wind blowing, you say, 'There will be scorching heat'; and it happens.
You hypocrites! You know how to interpret the appearance of earth and sky; but why do you not know how to interpret the present time? (Luke 12:49-56)

Embers Flare!
The disciples followed Jesus on the road to Jerusalem. They thought he would become the king of Israel and his power would drive the Romans out of the holy land. The words that Jesus had previously spoken, however, had not really penetrated into their beings. Their human nature was so corrupted, that God’s children apparently brought our Lord to the point of exasperation. Thus he clearly stated to them the Father’s purpose for him… in that he came to cast the fire of the Good News upon the earth. At that time he wanted the fire of the Spirit already kindled. The holy fire had sparked by the Law given through Moses, and it now was intended by God to separate iron scum from purified gold.
Within the context of the road to Jerusalem that was traveled by them on that day, we see that this conversation represented God’s judgment placed upon all humanity. Those who had received the Law were not convicted, and many simply followed Jesus for their own selfish reasons. Some however, the disciples chosen… were by God’s grace to be those who were to be immersed in the Holy Spirit’s power. In their case, in spite of their sin, they to be forged as pardoned and sent to give hope to those facing the fires of hell.
Though love was and yet is… surely at the heart of our Lord’s driving force, Jesus was frustrated not just by misunderstanding and sinful unbelief. We see that he thus stated ample warning. Our Lord said that in future days, sharp divisions were to result for each of them… even unto the very foundations of their Hebrew faith and families. This warning, given in love… was not out of character for our Lord. You see, earlier in both Luke and Matthew, in delivering the "Sermon on the Mount," our Lord used similar language. At that earlier time, however, Jesus had pressed the disciples about the importance of being reconciled with an adversary, even to the point of agreeing to disagree.
Clearly here in this text our Lord began to teach a similar, but slightly different lesson. The change came forth in view of the billowing evils of the day heating up against him. In the future, as well… those disciples who followed by the power of the Holy Spirit were seen not to back down from the fires of persecution.

Prophetic Warning!
In the time of the writing of Luke’s gospel, the Holy Spirit had already begun to forge the Christian church amid a very heated turbulence. Cast out from their parent synagogue communities because of their beliefs, the infant house churches of Luke were being caught up in a cauldron of religious and political unrest. History records that the Good News expressed by these faithful had begun to forge a separate, new entity within the Roman Empire.
You see, the emerging Christian church had begun to exert a telling influence in the society and economy of the diaspora Hebrew communities. In the midst of familial, social and political upheavals caused by their Christian witness, any followers blessed with expressing prophetic vision from our Lord were being singled out by opponents. Many of the established considered these disciples as harmful, hot coals injurious to the traditions of a faithful synagogue. Indeed, according to several powerful rabbinical persons, the Christians were also causing unwanted attention to be focused upon the Jews, simply because the Christians challenged the peace of the Roman Empire. This resulted in that the Christians had stated emphatically and repeatedly that only Jesus Christ was the Son of God… and not Caesar!

Feel the Burn…
As we in the church today examine this text, therefore, let us be warned away from complacency. Prophetically speaking, let me say that we are not to expect peace and cooperation from the modern world around us. Though experiencing resistance, however, please know that we dare not give ground in expressing our Savior’s particularity in the work of salvation. We cannot accommodate the present, pluralistic watering down of our Christian witness, commonly used for the sake of keeping the glowing embers of our true faith subdued.
As the church, we are not to allow our witness to be quenched for the sake of courting liberal congregational populations and maintaining full church collection plates. To do so is harmful to the singular, pronounced evangelical mission for which we have been called.
For example of this resistance in recent example of societal leanings, note that a portion of the agenda for a particular American political party is to make Christians abandon long-hardened, scripturally-based positions. These positions are to be refined within our church life to accommodate their own progressive, political agendas.
Thus we are to stand firm in light of these progressivist fires. As Christians, expect unpopularity and pronounced divisions. Let us in answer chart a controlled burn… a proper course in the expression of both the Law of God and the saving power of Jesus Christ. We who are blessed to be in the modern Christian church need to maintain the scandal of our Lord’s particularity. There is no salvation… except for saving faith in the redemptive death of Jesus Christ upon the cross, and His subsequent Resurrection and Ascension.
Know that our message comes to a society and world immersed in worldly pride and lusts. Indeed, this gospel message slices like a two-edged sword amid demonic powers who contest even the existence of God, or even when they admit His presence… reject His precepts, rewriting scripture in order to retain their hold on those who are enslaved.
Consequently, as we contend with these powers in the world, I say for you to look to the cross. Bonfires have been stirred up to consume us and are even stoked in a person's own household. Surely these may warm our foes temporarily, but by the enduring power of the Holy Spirit we shall scorch and strain society… finding sinners that will be brought to the quenching waters of baptism.