One Taken; One Left! 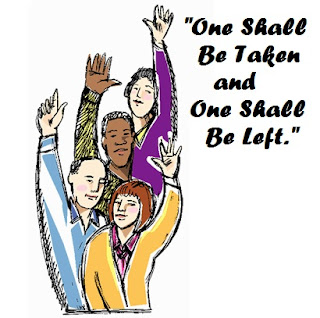 OUR study for the First Sunday in Advent within this new liturgical year comes to us from the Gospel According to Saint Matthew. We read the prophetic words of our Lord that were spoken to his disciples as they walked to the Garden of Gethsemane. Continuing his earlier conversation begun on the steps of the temple concerning the approaching “end time”, our Lord here stressed the coming divisions to be found both in the Church and human society…

“But of that day and hour no one knows, not even the angels of heaven, nor the Son, but the Father only. As were the days of Noah, so will be the coming of the Son of man. For as in those days before the flood they were eating and drinking, marrying and giving in marriage, until the day when Noah entered the ark, and they did not know until the flood came and swept them all away, so will be the coming of the Son of man.
Then two men will be in the field; one is taken and one is left. Two women will be grinding at the mill; one is taken and one is left. Watch therefore, for you do not know on what day your Lord is coming.
But know this, that if the householder had known in what part of the night the thief was coming, he would have watched and would not have let his house be broken into. Therefore you also must be ready; for the Son of man is coming at an hour you do not expect. (Matthew 24:36-44)

Last Call?
Spoken by Jesus just before his arrest and crucifixion, we read these words of warning as a call for faithful discipleship. The words told a prophecy of the coming “end time”. Therefore, given the importance of the text and its meaning for both the disciples and the Church today, we need to carefully study the historical context surrounding the teaching.
As we recall from our earlier study, Jesus left the temple after His words had burdened authorities with judgment. At that time he had expressed a call for repentance. Both ardent priests and the vested interests found in Israel’s sacrificial system were deeply affected. These quickly became embroiled in political intrigue over his words. However, subversive and clandestine powers within the temple had already begun the mechanism needed for our Lord’s arrest, through connections with the apostle Judas.
From this historical context these words were recorded from the “Q” document. They were passed to the Church later by both Matthew and Luke. The witness thus revealed the future forecast for churches within of the latter part of the first century. The pattern would continue for those immediate decades... and yet persist even to this very day. In illustration, we see that during the earlier reign of Caligula and other Roman Emperors, the fury had already descended earlier upon the faithful followers of Jesus. That era etched these words into the emerging mosaic of the future Church.
You see, for decades it had been revealed that the result of Jesus’ crucifixion and Resurrection was indeed that the penalty for human sin had been paid for those who believed. Eternal life was available to those who would stood firm. As a result, within decades that Resurrection faith had spawned the embryonic Church into being. As the Word spread, the Church grew. However, in answer to this grace, swords of punishment were laid heavily upon the infant Christians churches. Blades of persecution were wielded by Roman political powers suspicious of the new Christian faith expression. Jealousies from the dispersed Jewish communities intensified this effect for Christians, used as scapegoats after the fall of Jerusalem (65-70A.D.)

The social dynamic subsequently became such that the early Church populace was dividing. A person who belonged to a church under persecution would either return to the synagogue, or temple, or they hold tightly to the faith given to them through baptism into Jesus Christ as Savior. We can easily see… as it was then, so it is yet today in many places… with no middle ground existing. If someone chose back then to remain as Christian, both legal and social persecutions fell upon them.
As our scripture reading revealed, Jesus had described this scene to his disciples. Our Lord said that this would come upon us with suddenness. Our Lord said that the effect would occur amid everyday happenings. The subsequent outcome would be similar to that recorded before the days of Noah. A person would either be in the nave of the faithful boat... or miss it entirely. Scripture had illustrated that this had occurred when judgment rained quickly upon the ark. Therefore, Jesus told his followers that it would be so as well at the coming of the Son of Man. Through the waters of baptism into Christ Jesus, one person would be taken into Christ and remain… and yet another would not remain.
We must note here that the hour spoken of was a point of social examination and confession, or that hour occurred upon the occasion of a person’s death. The text clearly and universally stated warning.
In any case and at any time… the instruction from our Lord was for the Christian to “be ready”. The call was therefore given for persons of the Church to be baptized and remain faithful. This is the call we too receive as witnesses to this grace given.

Hear the Echo?
Consequently, as any faithful participant in a Christian faith community can relate, being Christian and staying ready is not something a participant can do independently. At any given moment we may be asked to give answer to the faith that is within us. Our Lord instructs that we are not to worry about how we shall answer! We are to trust and obey.


You see... answer shall be given to us by the power of the Holy Spirit. Indeed, at any moment an “end time” may occur for us, whether in our next breath or our last. This truth is historically recorded in that Christians within the early church gave us an enduring example of this behavior. Thus it has now been left to disciples today to follow in their footsteps. Together, as in earlier days, we need to pray for the power to repeat again the gospel message.
You see, brothers and sisters in the faith, the last days were already upon the church even as Matthew penned his vivid account. Now these words echo once again to us during this Advent season. They come to us from across the centuries as we kneel in faith and wonder. We as Christians… find that we are surely living as witnesses in “end times”.