What Do You Talk About? 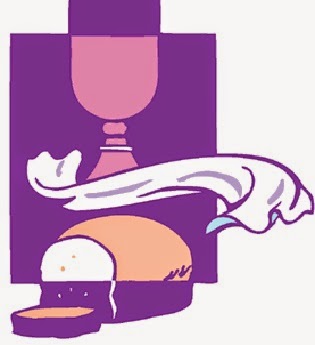 OUR READING for the Third Sunday of Easter comes to many of us from the Gospel According to Saint Luke. Some congregations will use an alternate reading as found in...
Hidden Witnesses?
However, in this reading above we have words spoken in similar manner to those which we studied in last week's publishing. Rather than revisiting that scene, today I have chosen that we consider words here that describe the encounter between Jesus and two men just after the Resurrection. The event happened on the road to Emmaus. This profound meeting reveals to readers a tone established for future gatherings between our Lord and his followers…

That very day two of them were going to a village named Emmaus, about seven miles from Jerusalem, and talking with each other about all these things that had happened. While they were talking and discussing together, Jesus himself drew near and went with them. But their eyes were kept from recognizing him. And he said to them, "What is this conversation which you are holding with each other as you walk?" And they stood still, looking sad.
Then one of them, named Cle'opas, answered him, "Are you the only visitor to Jerusalem who does not know the things that have happened there in these days?" And he said to them, "What things?" And they said to him, "Concerning Jesus of Nazareth, who was a prophet mighty in deed and word before God and all the people, and how our chief priests and rulers delivered him up to be condemned to death, and crucified him. But we had hoped that he was the one to redeem Israel.
Yes, and besides all this, it is now the third day since this happened. Moreover, some women of our company amazed us. They were at the tomb early in the morning and did not find his body; and they came back saying that they had even seen a vision of angels, who said that he was alive. Some of those who were with us went to the tomb, and found it just as the women had said; but him they did not see."
And he said to them.., "O foolish men, and slow of heart to believe all that the prophets have spoken! Was it not necessary that the Christ should suffer these things and enter into his glory?" And beginning with Moses and all the prophets, he interpreted to them in all the scriptures the things concerning himself.
So they drew near to the village to which they were going. He appeared to be going further, but they constrained him, saying, "Stay with us, for it is toward evening and the day is now far spent." So he went in to stay with them. When he was at table with them, he took the bread and blessed, and broke it, and gave it to them. And their eyes were opened and they recognized him; and he vanished out of their sight. They said to each other, "Did not our hearts burn within us while he talked to us on the road, while he opened to us the scriptures?" And they rose that same hour and returned to Jerusalem; and they found the eleven gathered together and those who were with them.  (Luke 24:13-35)

Along the Road…
Both Mark (see also Mark 16:12-13) and Luke record this occasion, However, Luke’s account reveals far more, in that the scripture tells us about the conversations that occurred on that first Easter day. The two men walked out of Jerusalem, apparently returning to their homes from religious observances in the city. However, we find that the men were not just examples of the great number of religious who had celebrated the festival. These men Luke relates, were among those who had looked forward to Jesus taking on the role of Messiah. One of the men, named Cle’opas, is thought by some biblical authorities to be the father of Simeon. Simeon was the man who took on the ministry of James, in serving as the head of the Jerusalem church after the leader’s martrydom.
The two men walked toward Emmaus wondering about the recent, tragic events. They discussed the death and burial of Jesus. They also talked about the startling report of the women who had been to the tomb… that the tomb was empty. And then, Luke tells us… Jesus joined in walking along with them as they journeyed. But the two did not know it was Jesus.
To hearers, this last side note rests profoundly. The account writer found it important to note this. The comment allows us to assume that at least one of the men had seen Jesus before, and should have recognized him. We fathom then, “Why was it stated that his identity was hidden?” Anyone psychologically-minded today, may question whether their inability was due to the travelers’ confusion, disappointment or grief. Or was it denial and lack of faith? Sins of unbelief? Possibly human short-sightedness? We cannot know. But lest we judge them, consider that anyone today may also suffer tunnel vision during similar happenings. In the midst of unexpected chaos, how often do our own problems isolate us? Sociologically, we have been known to shrink our conversational circle to confidants in times such as described. We stay away from church, religious counselors, and from our Lord … so that we do not recognize God working alongside by the power of the Holy Spirit.
Note in the reading how surprised the two men were that the fellow traveler did not seem to know what had occurred during the festival. Though Jesus surely knew, there seemed to be a conversational chasm. created and widened by their faith gap. The existence of this discourse may indicate that for Lukan communities some forty years later... many persons also knew of the crucifixion and death of Jesus... but like the two men on the way to Emmaus they did not know the meaning. The dialog thus engaged persons in Luke’s later churches. It also engages us.
The reading urges us toward mining the words of scriptural prophecy that foretold of the Messianic resurrection. Such was the content of the reprimand that Jesus gave to the two men. In extended conversation, therefore, given while walking along… Jesus witnessed to them from scripture about his own death and Resurrection! We in today’s Christian church should pay close attention to his evangelical method. Possibly using prophetic witness, conversation about this very topic could occur amid a carpool, commuter train ride, or lunchtime stroll. I woefully consider lost evangelical opportunities that occurred on my own commuter train rides among co-workers.

Tasting a Eucharistic Flavor?
As told by Luke, the three men soon arrived at the destination of the two travelers. There they invited the Lord to abide with them for the evening. And by doing so, they gave opportunity for Jesus to be known to them through the breaking of the bread and blessing of the meal. He then revealed his identity to them! The hearers of this account in the Lukan communities long ago, therefore, were reminded as well of the Lord’s historic breaking of the bread on both mountainside and plain. They were provided opportunity in the Spirit to recall the telling about the final Passover meal with Jesus. That wondrous event had occurred in the upper room where Jesus had said, “This is my body given for you.” and, “This is the blood of the covenant shed for you...” Therefore, Luke told the history that stands forever behind the established Eucharistic sacrament for his communities to come. He related the divine foundations of holy remembrance. Luke, a blessed evangelist to be sure… opened a window for his churches to see the event in their spiritual sight. The light dawns also in our mind’s eye when we hear the message, for we can clearly apprehend the unfolding miracle through the power of the Holy Spirit.
On Being Evangelical
In today’s church we may now ask ourselves, just as Luke's hearers likely queried.... “What are we to do with this good news?” The continued reading openly explained to clouded minds. We are to do as the two men did so long ago. Even in our despair, we are called to turn and face God. We are to turn and confess of our sins and unbelief. Then, having received God’s forgiveness through Christ, being empowered through sharing of the body and blood of our Lord through the Sacrament of the Holy Eucharist…, we are urged by grace to witness. We are to let it be known among ourselves, and others… that we have been chosen to run and tell the good news. Indeed our house has become the Lord’s house! We have seen the Lord in both minds and hearts.
Jesus Freaks, Car Nuts or Both ,,, Click Here!
Yes indeed! Jesus surely comes amongst us through Baptism by  the power of the Holy Spirit and by our participation in His holy meal. In this reading, therefore, we are privileged to hear once again the story of Jesus who died and rose again so that we might receive the gift of eternal life. That good news brothers and sisters, relates to us that our gift is to be given to others. Having received grace upon grace through this gift, we are called to go out from our churches rejoicing. Let us race to tell others just as Luke described.
Blessed Christians! If nothing else comes to your mind, simply begin your first conversation with a companion by joyously saying. “He is Risen… risen indeed!”

Please be invited to view our videos...


May the Lord guide your steps forevermore!