Raised Up to Serve! 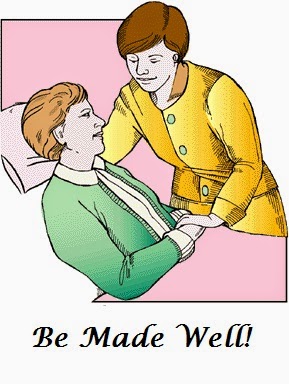 ON THE Fifth Sunday after Epiphany, we once again hear from the Gospel According to Saint Mark. This lesson, a continuation of hearing about our Lord’s early ministry in the town of Capernaum, reveals that true healing come to us because of the love of God poured out through Christ Jesus. We read…

And immediately he left the synagogue, and entered the house of Simon and Andrew, with James and John. Now Simon’s mother-in-law lay sick with a fever, and immediately they told him of her. And he came and took her by the hand and lifted her up, and the fever left her; and she served them.
That evening, at sundown, they brought to him all who were sick or possessed with demons. And the whole city was gathered together about the door. And he healed many who were sick with various diseases, and cast out many demons; and he would not permit the demons to speak, because they knew him.
And in the morning, a great while before day, he rose and went out to a lonely place, and there he prayed. And Simon and those who were with him pursued him, and they found him and said to him, “Everyone is searching for you.” And he said to them, “Let us go on to the next towns that I may preach there also; for that is why I came out.” And he went throughout all Galilee, preaching in their synagogues and casting out demons.  (Mark 1:29-39)

The Ongoing Work…
The scene of this reading, as also found reported in Matthew 8: 14-17 and Luke 4:38-44, tells us of God’s compassion for those who are afflicted. You see, God’s care for the afflicted and any subsequent healing occurs even though Jesus stated that it was not the original purpose for his mission. (see Mark 1:14 ).
After having worshiped with his disciples and others within the synagogue in Capernaum wherein he read the scriptures, preached and silenced a stubborn demonic spirit, our Lord went to the home of Simon and Andrew. There his ministry to the people of that place continued. Within this text, we thus see a living pattern emerged for the Church… and for our own lives doing ministry outside of hallowed walls.
You see, the behavior of our Lord holds true even in present times because our Lord remains with us, working in our lives as the Word given to us by the power of the Holy Spirit. For this reason, let us examine the scripture to see what works our Lord accomplished on that particular day.
We read that after worship, Jesus was informed that Peter’s mother-in-law was “down sick with a fever” (in the Greek text - κατέκειτο πυρέσσουσα). Without hesitation, Jesus immediately went and ministered to her. She was lifted up by him and took her place in the household, and began to serve him and the others with him. We note that no other members of Peter’s household were mentioned in the account… just his mother-in-law! Also notice that the healing occurred after the previous synagogue  reading and preaching.
Believing therefore, that there is nothing in the holy Word that should escape notice… I am brought to consider that she is mentioned clearly here for significant reason. And, though it may be a stretch for us as a modern people, I ask, “Is she an example for us? Does she represent to Mark’s community a revelation that Jesus’ ministry has no bounds? Are we not called today to think the same?” Further, we may wonder, “Did she represent the whole, prostrate, healed and future Church propelled to serve into the future? The modern Christian mind boggles at these thoughts. However, I find the answer as very credible, in that without one hint of rebellion or comment being mentioned… that she served them!

We’ve previously heard about a cantankerous person with the possessed man in last week’s gospel reading. However, here no mention was made concerning the woman’s previous disposition, other than that she may have been otherwise adhering to Sabbath rules by laying down and resting. She was described as one who rose then without a word of complaint. Is this not to be the role of the Church throughout the ages, until the day when we realize the fullness of the kingdom?
Note also that at the setting of the sun, Jesus’ ministry continued. You see, Peter’s home had already experienced the will of the Lord of the Sabbath as Jesus did the work of healing, and afterward the work of the woman in serving occurred. We may also assume that even while the day wore on…. there was more acceptable household service that occurred.
We need remember that out in other homes within the Hebrew community… work was not to be done until the Sabbath was completely over. From the Torah, we read…

“Remember the sabbath day, to keep it holy. Six days you shall labor, and do all your work; but the seventh day is a sabbath to the Lord your God; in it you shall not do any work, you, or your son, or your daughter, your manservant, or your maidservant, or your cattle, or the sojourner who is within your gates; for in six days the Lord made heaven and earth, the sea, and all that is in them, and rested the seventh day; therefore the Lord blessed the sabbath day and hallowed it.
(Exodus 20:8-11)

For certain, Sabbath restrictions were widely observed by devout Jews in the Capernaum community and beyond. These were not seen as applicable to Jesus, however, because Mark was stating that our Lord is indeed Lord of the Sabbath. Jesus is the Son of God. Consequently, Jesus mercifully showed himself to be such, as he freely healed Peter’s mother-in-law on the Sabbath.
However, most Jews in the community of Capernaum kept Sabbath. They waited until the day was over to bring others for healing. “Why did they come?” we might ask. Were they spurred in response of the earlier demon being driven out from the unruly man in the synagogue? Indeed, was that earlier event sufficient to bring the whole town? Or was the gathering a response to the cure of Peter’s mother-in-law being broadcast over a backyard stone wall on that afternoon so long ago?
In any case, when that evening arrived Jesus responded to needs and healed those who were brought in faith. He ministered to them by driving out sinful and adverse spirits. The casting out had varying response, depending on the person afflicted. You see, the Hebrew mindset about illness was such that no separation existed between body, mind, or spirit. To them, a wholistic healing was provided by Jesus. We note however, that the issue for Mark is not in remarking about the results of healing, but in revealing the reaction of the demons (Greek text – δαίμων). The healings were authentic and they disturbed many. Powers that caused evil, the demons… were seen as disturbed.
In reading we may wonder then, "Maybe the demons of jealousy took hold of leaders within the synagogue?" Were evil entities stiffening in those who thought they had a firm hold on the local, rural world? Did the local medics, priests and medicinal suppliers fear for the loss of their business?
Whoever the demons assaulted, those community leaders were certainly threatened. By virtue of Jesus’ authority these persons obviously felt the power and some knew his identity! In keeping with the writer’s basic theme of the “Messianic secret”, therefore, the demons (those who distribute evil mindset) were commanded in power not to cry out though they knew the identity of Jesus.

What Now?
The next morning, when light appeared, Jesus arose and went out by himself into the surrounding country to pray. Again, please understand that I consider this scene to be very instructional to the whole Church, which is the community of Christ both then and now.
Being sinfully human and rather parochial in thought, the disciples looked for and caught up with Jesus. They wanted him to return to Capernaum. Consequently we may ask, "Was it that they saw him demonstrate the ability to heal, and they collectively wanted him to become an endeared local physician." Possibly this was so, for the disciples expressed what they felt was a worthy desire for themselves and those around them. Surely we may think, amongst their number were persons who yet needed such care… and would possibly need more of his care in the future. Here then we need be reminded by our writer that Jesus did not come into the world specific to that healing purpose.
Remember! Jesus earlier had stated his ministry objective clearly. Mark clearly noted that purpose! Jesus, the only begotten Son of God… had come for that reason which the author previously revealed. Jesus came out to proclaim the Good News, the gospel of God. Indeed through Jesus Christ, God was working to reconcile the world to himself. Consequently, as we today read and hear this text, may we echo this message though our Church community.
Click Here To Visit Pastor's Personal WebSite!
We are to understand through the teaching of the Holy Spirit, that the perfect, once and for all time healing… was indeed realized when our Lord came into the world and died at Calvary. Through him the kingdom of God was and still is at hand. Given this, what are we in the Church to do? I say to you that his Church is to come before our Creator and repent… turn around… and read once again from Mark 1:14. We are to individually and collectively face the altar of our loving God and believe this Good News. Let us do so in the name of the one who taught us, healed us and died for us... Jesus Christ alone. Let it be known by all and let it be lived by us as we answer the call to rise and serve.

Please be invited to view this video...

Do Ministry In His Name: Proclaim Law and Gospel!