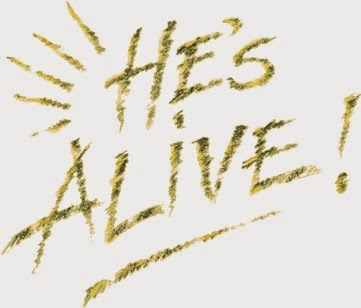 OUR SCRIPTURE study for the Third Sunday of Easter comes to us from the Gospel According to Saint Luke. Just previous to this text, our author had written that Jesus proved his real presence first to several travelers on the road to Emmaus. Next he wrote that the two men went to tell the disciples of the Resurrection, and then Jesus appeared among the disordered gathering.
At that subsequent time, our Lord showed evidence of his human existence by displaying the marks of his crucifixion and demonstrated further by eating in front of them. Our author also related that Jesus stressed to those gathered that sacred Hebrew writings had prophetically informed freely of his identity. Of this marvelous occasion, we read. . .

Jesus himself stood among them. But they were startled and frightened, and supposed that they saw a spirit. And he said to them, “Why are you troubled, and why do questionings rise in your hearts? See my hands and my feet, that it is I myself; handle me, and see; for a spirit has not flesh and bones as you see that I have.”
And while they still disbelieved for joy, and wondered, he said to them, “Have you anything here to eat?” They gave him a piece of broiled fish, and he took it and ate before them.
Then he said to them, “These are my words which I spoke to you, while I was still with you, that everything written about me in the Law of Moses and the prophets and the psalms must be fulfilled.”
Then he opened their minds to understand the scriptures, and said to them..,
“Thus it is written, that the Christ should suffer and on the third day rise from the dead, and that repentance and forgiveness of sins should be preached in his name to all nations, beginning from Jerusalem. You are witnesses of these things.
(Luke 24:36b-48)

Two or Three Were Gathered…
From a time just before the turning of the first century (c.85A.D.), Luke’s gospel told this account about the life of Jesus. By doing so, he thus transmitted both history and faith message. During the fifty-odd years that had passed after the actual event, the center of the Jewish religion had been severely challenged. For instance, in 70A.D. the fortress containing Jewish leadership at Masada had fallen. It is said by some researchers that the Christians who had met in Jerusalem were among them. As well, the military resistance of Simon Bar Cochba had been crushed. The Romans thus in rapid-fashion first desecrated Jewish worship in the temple and had for a time also forbidden Jews to circumcise their children. Amid this Judaic religious turmoil, blessed Luke wrote about Christ Jesus. His testimony spoke boldly then to Christian Jews worshiping in the infant house churches throughout the Empire, and to the greater expanse of Gentiles sharing in their plight.
Just before our reading in Luke’s text, we see that only three persons first told the disciples of Jesus appearances. Mary Magdalene, Cleopas (Clopas) and another man who was with Cleopas on the road to Emmaus had gone to the hidden disciples. All had told of our Lord’s appearance.
The disciples had met in confusion and fear. In this written text we thus enter a word picture faithfully painted by the power of the Holy Spirit, who worked through the quill of our author. In this lesson we envision that Jesus suddenly appeared amid the gathered disciples.
Startled by his unexpected presence, the apostles at first believed him to be a ghost. We may ask whether this emphatic telling was thus meant as a firm rejection of a heresy distributed in Luke’s own time? You see... many persons living at the time of the writing, as even now, struggled hard to understand the two natures of the Resurrected Christ. Because of this, Luke may have made sure to point out truth to the readers that our Lord was “bodily” present.
Proof was given to the early Church. Therefore, these proofs also come to us yet today through Luke’s words written in this gospel. Jesus’ physical wounds and his eating of fish gave evidence to his followers who were gathered. This gives credibility to their faith witness. That credibility in faith eventually founded the very communities to which Luke wrote.
Luke emphasized that surprising scene occurring as a predictable one, by revealing that Jesus recalled for them the Jewish history. Our author therefore refreshed the memories of his own Jewish faithful that also hid within house churches during the author’s time. The words spoken reminded Christian Jews concerning the Law, the prophets and the psalms. The scene described how Jesus reminded that scriptures had foretold about our Lord’s coming. They prophesied that after death he would  rise again as both the divine and human Messiah. To this end, the gospel consequently related to anyone who might read... that Jesus was the Messiah, the Christ of God.
Luke thus told his readers the wondrous story of the Resurrected Christ. The message loomed large for the dispersed Jews that were in the early church. However by doing so, he also deliberately revealed the same message to the many Gentiles and Romans who would also hear of God’s grace. You see, the Church quickly became ethnically diverse. I offer that to address this diversity was his purpose from the beginning of his work… for many in the ancient world were God seekers. From the start of the gospel we read . . .

In as much as many have undertaken to compile a narrative of the things which have been accomplished among us, just as they were delivered to us by those who from the beginning were eyewitnesses and ministers of the word, it seemed good to me also, having followed all things closely for some time past, to write an orderly account for you, most excellent Theophilus, that you may know the truth concerning the things of which you have been informed.  (Luke 1:1-5)

Thus Luke related the words of Jesus to the world. By his orderly transmission of history and message, I contend that this witness of Luke occurred over against growing punitive measures. You see, the scattered Jews had tried to temper Roman suspicions about their traditions across the expanse of the Empire. From the time of Nero, they pointed to Christians as the source of growing social unrest by their subversive practices. Rome began therefore to restore Jewish privilege and railed hot against the early Christian communities. This gospel, therefore, became a witness needed to help steady the evangelical course that was set before them. In similar way, the book of Revelation written by John of Patmos during the same time also reached out to do the same.

To Whom Spoken?
Interestingly the name “Theophilus”, the man to whom the book of Acts is also written, actually is interpreted as “God Lover”. Consequently we cannot be sure whether the writing of Luke was addressed to an actual person or the name portrays the collective identity of the dispersed Church. Since we have not historically identified Theophilus, I believe that we in the modern Church may consider that the latter may be true. In any sense, however, let us consider that the call to right proclamation of the gospel message is also meant for us.
Remember that we need not fall victim in our own day to those who portray Jesus as merely a ghostly manifestation. Nor do we need to bite down on the lure of apostate humanism much like a fish caught in a progressive, modernistic net, destined to become a slain religious corpse in our own time.
Therefore we know that the Church willingly faces certain persecutions. Many in the modern world are like the vicious overlords of Rome. Principalities and powers would target the Church while listening to those speaking falsely against us.
Ask this! Did they not do that same thing to our Lord? Did they not do so to blessed Saint Paul as he spoke the gospel in the stadium of the Greeks? Indeed it was so! But they did not prevail though they call us fools. We Christians who are brought by Baptism into the one true, apostolic and orthodox Church are called to boldly proclaim the gospel.
Let us pray that the scriptural witness provided by the Holy Spirit shall quiet unbelievers' misgivings in the world. Let us witness and turn others away from unbelief and confusion. I say that together, empowered by the Spirit, we can yet preach Baptism and forgiveness of sins in the name of Jesus Christ. This task was commanded by our Lord, so to be done in all nations of the world. Truly we ask that the Holy Spirit would allow the Church of Jesus Christ to cling firmly to the knowledge that we indeed are saved by grace through faith that is given to us in Christ Jesus, and not by any work that we may do. Let us hold tightly to this central teaching and not buy into false doctrines that would detract from either the divinity or humanity of our Lord.
Christians, Car Nuts and Both... Click Here!
Consequently, through the gospel given by the Spirit’s power we clearly hear our calling as followers. Witness faithfully even though the fulfillment of the kingdom (parousia) is yet delayed. Certainly our God, the Father Almighty, working both through his living Son and the Holy Spirit shall determine our final day. We have been given a sure and certain hope. All this we know certainly, for Luke has told us… Christ is Risen, risen indeed!


May the Lord Bless and Keep You!