As Those Made One! 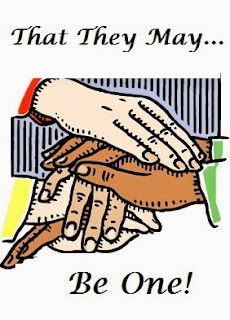 For the Seventh Sunday in Easter, we read a continuation of our Lord’s priestly prayer made for his disciples. The prayer specifically requests unity for them in will and purpose…

Before His Departure…
Our gospel records a prayer spoken by Jesus to God the Father during his last evening before crucifixion. Our Lord’s foreknowledge of his impending arrest and death because of conflict with this world’s powers, seems to be the motivation factor for his lifting up of those who had been with him from the beginning. However, amid this prayer the gospel writer firmly conveys that Jesus was concerned about the unity of his followers. Originally, this may have made in response to such conflicts as when James, John and their mother approached our Lord for a special request. They sought that the two men would be placed at his right and his left when our Lord came into his kingdom. The request showed competition for power and position amongst the disciples.
In this sense, by this highlight our writer most likely had a foreshadowing of the continuing internal strife coming upon the Church in his own day. At the turn of the first century the Church was heavy-laden by theological strife. Many factions were engrossed in the task of apologetics, the task of trying to explain the person of Jesus to the world. By doing so, persons seeking their own way, were making distorted statements about our Lord’s deity in relation to the Father. John, our gospel writer, thus included in this high priestly prayer in his gospel that Jesus, as the only Begotten Son, spoke directly to the Father.
We note rightly that our text starts with Jesus praying that he was soon coming to his “Holy Father” (In the Greek – “pater hagie”). Within the text, therefore, we have Jesus naming his Father as “set apart” and yet joined in complete unity with himself in will. In this text, therefore, I believe that John is addressing against the rumblings of heretical and apostate factions within the early Church.
You see, there were those who considered Jesus as a man, others a lesser god, and yet others saw him as a god-man (Greek – “theos-aner”) who gave humans the illusion of his own humanity before going back into the heavens. Within records from the first century, written after John’s writing of this text, we find a wide range of heresies raised. The Church struggled for several centuries concerning how to explain the true doctrine of the Son related to the Father, and eventually the settled doctrine of the Holy Trinity.
John highlighted here that from the beginning of the disciples were chosen by Jesus. Therefore they were set aside. The group was defended by Jesus from the evil of the world by the gift of eternal life. That is, our Lord asked that they should be declared holy, set apart for the sake of his mission. This protection occurred for everyone in attendance, with only the exception of Judas. As written in the psalms…

All who hate me whisper together about me;
they imagine the worst for me.
They say, “A deadly thing has fastened upon him;
he will not rise again from where he lies.”
Even my bosom friend in whom I trusted,
who ate of my bread, has lifted his heel against me.
(Psalm 41:7-9)

Also, within earlier text (John 13:2, and 13:47), Judas had been described by John as a person influenced and taken over by evil.  Within this request to the Father, therefore, our Lord voiced that he wished that though his followers would remain in the world, they would not be lost by the world’s evil. He asked that the Father would “sanctify them”.
In the Greek, the text “agiason autous”, means “keep them holy”. Our Lord thus stated that because the Father is holy and Jesus himself was kept in the same holiness, that those of his infant church should be so set apart as well. Therefore the disciples formed the early Church, who worked brazenly in the world, and would not be crushed by the world and its evil doings.

As Those Made One…
The emphasis that brings the lesson today to a close, therefore, is that just as Jesus was sent to minister to the hostile world, we of the apostolic Church should be considered also as God’s “holy sent ones”. By the power of the Holy Spirit, the apostles walked out into the world to proclaim the good news. So to should the Church today.
As the Church working in a global society, yet rooted in congregations or house churches where two or three are gathered in his name, we Christians are empowered to take heart. No matter whether we serve in harsh or friendly conditions, or speak before friendly or hostile persons, know that some of the world will attempt to manipulate the right declaration of the gospel to their own ends. These attempt to trash the Church and sorely abuse its witness. For their own selfish gain they assail the gospel message.
Click Here To Visit Pastor Tom's Web Site!
Know this. Through the many centuries since this gospel text was written, we of the Church have endured evil. These demonic powers work yet today within the world. Many factions within modern society attempt to make the Church irrelevant. Through this text then, please know that our work in the Spirit before God our Father for the sake of Jesus Christ our Lord shall endure… whether we serve the lowly or in the Caesarean-like palaces of the high and empowered. We are called to engage the world, and not hide from the evil powers that roam within it. Amid a world that endorses such as abortion, genocide and religious intolerance, we are to declare Jesus Christ, and him crucified and Risen. Surely, by doing so wherever we find ourselves in the over-against-ness of this world, we need proclaim repentance, forgiveness, and Truth. Jesus is Risen! He is Risen indeed.
Please be invited to view this video...
Jesus prayed that we might be one!