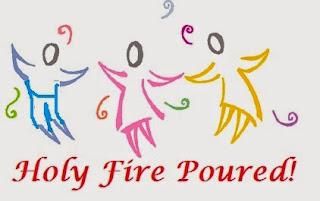 ON PENTECOST Sunday, we hear the unbridled conversation of Jesus to his gathered disciples. Described as expressed during the night before his arrest and subsequent crucifixion, within the Gospel According to Saint John we find that Jesus instructed his followers for the long term. Therefore, the message we read not only applied to his disciples gathered with him during that time. but the message was spoken also to those who would come after... called to be our Lord’s future church. For guidance then today, we read…

“But when the Counselor comes, whom I shall send to you from the Father, even the Spirit of truth, who proceeds from the Father, he will bear witness to me; and you also are witnesses, because you have been with me from the beginning… that when their hour comes you may remember that I told you of them.
I did not say these things to you from the beginning, because I was with you. But now I am going to him who sent me; yet none of you asks me, “Where are you going?” But because I have said these things to you, sorrow has filled your hearts.
Nevertheless I tell you the truth: it is to your advantage that I go away, for if I do not go away, the Counselor will not come to you; but if I go, I will send him to you. And when he comes, he will convince the world concerning sin and righteousness and judgment: concerning sin, because they do not believe in me; concerning righteousness, because I go to the Father, and you will see me no more; concerning judgment, because the ruler of this world is judged.
I have yet many things to say to you, but you cannot bear them now. When the Spirit of truth comes, he will guide you into all the truth; for he will not speak on his own authority, but whatever he hears he will speak, and he will declare to you the things that are to come. He will glorify me, for he will take what is mine and declare it to you. All that the Father has is mine; therefore I said that he will take what is mine and declare it to you.”  (John 15:26-27, 16:4b-15)

A Word for the Long Haul…
God sent Jesus as the answer to the separation caused by human sin. At the time, our Lord was about bringing together the Creator and those created. Jesus worked therefore to reconcile the gap between the Father and his people. In this lesson, we deal further with the great work of the Holy Spirit who was being sent into the world so that God’s word of salvation should be poured out. The Spirit would empower the gospel proclamation of the Christian church.
The task of the Spirit was thus plainly taught by our Lord. Jesus explained that the Holy Spirit would convince the world concerning its sinfulness. The Spirit, termed here as the legal Counselor of God, would speak of God’s exclusive righteousness and point out the divine right for making judgment. In other words, the Spirit would teach that we are already rightly judged as guilty! Any readers or hearers who doubt this claim can read the commandments as found in the ancient scriptures (see Exodus 20:1-20).
If we stand in the Spirit we find ourselves convicted by the Law. We are then driven by our separation to seek reconciliation with our God. Further, Jesus taught his chosen disciples that the Holy Spirit shall not only guide those who are convicted. but that His power would come upon them in fullness, Through the Holy Spirit, Almighty God as expressed by the Father and Son would guide their words and paths. The way into the future shall be revealed to them.
Note here! The Spirit was said by Jesus to reveal both the will of the Father and the salvation supplied by the Son. Thus in Jesus’ statement to those gathered around him, we find the teaching that “all” knowledge needed for salvation would be completed. Thus the entire purpose of our Lord’s death and Resurrection was to be revealed to the future Church. In that way, the holiness and exclusivity of the scriptural, unchanging Word was placed eternally before us.
This message comes to the modern Church both as the Word of God in written and spoken sense. However, be careful here that we do not get haughty and proud! Though God chose to reveal his will though the Word, it doesn’t mean that we of the Church always pay attention. While the Word is eternal and does not change… our willingness to be open to the Spirit’s teaching and properly understand may vary greatly. Given this human frailty, our right understanding comes only when we receive the text without imposing our sinful human will upon its interpretation.

Toward Greater Understanding!
When we hear of the prophetic fulfillment of this message concerning the Holy Spirit’s outpouring upon the disciples, we often find that many persons today become startled. They are made aghast at the high “spirituality” described by Luke's description written in the “Acts of the Apostles”. This results in a communications breakdown between an ancient culture and our own modern scientific-era. We often hear this expressed in unbelief when the scripture is read that “tongues of fire” were seen.
To explain this miraculous phenomenon out of my finite understanding, please notice that in ancient times all things that raised the human temperature were considered as spiritually-sourced. This was true whether the cause was physical, psychological or spiritual. For example, if a child became ill so that its bodily temperature rose even in a sustained minor degree… the heated condition was said to be sourced by a demon. This was the ancient thought world.
At times, sweet parental care and primitive medicine of the day would drive a demon out. However, if a person’s high temperature, sweating and flushed face persisted or rose to the point of convulsions, it was said to be due to a host of demons or the work of the strong Devil himself. Beelzebub, the Devil…also named Satan, was said to have certainly produced the great malady. The illness was caused by the Evil One, was an evil event... and the sick person could worsen even unto death.
Given this mindset, let me offer that the healings performed by Jesus were thus seen as personal release from the heated influence of temperature-raising demons. In those authentic healings, the offending spirits were interpreted as driven out since the person's temperature became lowered by the power of God's divine love given in Christ Jesus.
Given this expression viewed from an ancient belief system, we can understand that if anyone spewed heated, passionate words that would redden a face in that society... they would also be accused of being under the influence of a demonic spirit. But what kind of spirit was at really work in this particular instance? Was the Spirit discerned properly as they guessed the source? What did people say drove the disciples to witness during Pentecost? Was it illness? Was it drunkenness?
As was seen and described by Luke, the Spirit that empowered the disciples was different. The Holy Spirit that, “fire empowered” the disciples worked from excitement within the apostles to give birth to the Church. This divine power spilled forth in heated birth pangs so strong in the disciples that they spoke to many persons in various languages. Any nurse standing beside a woman giving birth without anesthetic can often testify to the occurrence of heated work and powerful speech. Most certainly there are commonalities among languages, that when worked upon heatedly... would communicate God's love poured out.
Understand this! The intense power of God’s love overcomes all barriers, including language. The Holy Spirit of God the Father and Christ Jesus, expressed as the miraculous structure of the Holy Trinity, was the divine three-some which gave the disciples the words and actions to breach sinful human separations and establish the Church.
How powerful was this event? Some present at the Jewish Feast of Pentecost said that Peter and the others were just drunk and touted that was why their spirits were heated. Others claimed that all had demons and the Devil was in control. The miracle that occurred, however, was that the followers of Jesus spoke about Jesus with heated passion. Others who gathered... whose faith in God had grown cold due to sin, listened to the good news of forgiveness before God. They were brought to believe that God could forgive them for the sake of Jesus Christ, and would bless them by warming them in that same Holy Spirit. People admitted sinfulness, and were impressed with the fervent love conveyed passionately by God through Jesus Christ’s sacrifice. By the Spirit’s teaching and speaking through his apostolic servants then, they knew that God had worked to deliver them.
I pray that through my rather modernistic interpretation here of that wondrous Pentecost event, you may now see that the outpouring of Holy Spirit caused a great spiritual birth. That faith was given by God to both the disciples and many present in the crowd. Faith was given not because any were smarter, richer, pious or more powerful than anyone else. That faith was imposed upon them freely as a brightly shining gift. It was a fullness of faith that suddenly burst into flames as the excitement of eternal deliverance jumped from one to another. You see, knowing the Truth... as Christ Jesus was revealed, the disciples working by the power of the Holy Spirit founded the early Church. They could not help but express the power of God. God’s judgment from on high concerning their sin was felt, and His judgment drove hearing persons to repentance. With the testimony of Jesus crucified and Risen proclaimed, the Truth of reconciliation was presented and understood. The Holy Spirit thus fast formed the Church as a spiritual entity that would course across the centuries until now.

In Our Day...
You see, from its birth, the early Church was truly formed be a central and faithful witness. That witness was formed as a parental power so that we as God's people may also speak in child-like faith. Forgiveness is made available only through Jesus Christ. The Holy Spirit spoke through the disciples that God had raised Jesus Christ from the dead. He is Risen and reigns eternally.  This is the gospel that we of the church are to proclaim yet today. He is Risen, and so too we shall be! This is the message we need to relay on Pentecost. We are to carry our worship into the throes of the center square. This was the apostolic message of the disciples. It is now our message to be preached openly until the day when we see our Lord coming toward us in the hazy clouds of the future. Come Lord Jesus… be our guest!
May the Lord bless you and keep you. May the Lord lift you up and set you on fire to be his witness in the world. AMEN, AMEN and AMEN.

For those that wish to do so, please venture to watch a Pentecost message....


May the Spirit of God, be with you forevermore!