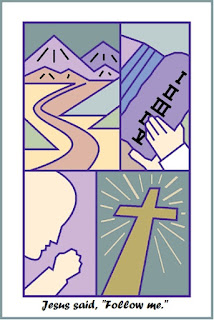 For the Third Sunday after Pentecost we find that our reading comes again from Saint Luke. The text he wrote tells of Jesus answering his disciples’ questions concerning power and position as they travel with him toward Jerusalem and the cross.

“When the days drew near for him to be received up, he set his face to go to Jerusalem. And he sent messengers ahead of him, who went and entered a village of the Samaritans, to make ready for him; but the people would not receive him, because his face was set toward Jerusalem.
And when his disciples James and John saw it, they said, "Lord, do you want us to bid fire come down from heaven and consume them?" But he turned and rebuked them. And they went on to another village.
As they were going along the road, a man said to him, "I will follow you wherever you go." And Jesus said to him, "Foxes have holes, and birds of the air have nests; but the Son of man has nowhere to lay his head."
To another he said, "Follow me." But he said, "Lord, let me first go and bury my father."  But he said to him, "Leave the dead to bury their own dead; but as for you, go and proclaim the kingdom of God."
Another said, "I will follow you, Lord; but let me first say farewell to those at my home."  Jesus said to him, "No one who puts his hand to the plow and looks back is fit for the kingdom of God."  (Luke 9:51-62)

Being Resolved!
In our lesson for this week we find that two nearly distinct themes are nested… and woven cleverly together by our Lukan author. Initially we hear from Luke that Jesus decided that in keeping with prophecy, it was time to go to Jerusalem. Mirroring the earlier written Mark 10:1, and his contemporary author who wrote in Matthew 19:1-2, this decision recorded in Luke immediately sets the stage for the drama of confrontation. According to our gospel writer, the initial disturbance caused was evidenced first in sinful religious animosities. These arose between the various religious cultures of the day. The text reflects how Jews and Samaritans had long competed with one another for recognition. Each, promoting their respective historical worship sites, had declared priority. However, in keeping with prophecy God had allowed a dedicated temple to be built in Jerusalem. Therefore, the centralized worship of God in Jerusalem by the children of Jacob had festered jealousy among the Samaritans. Conversely, from the perspective of the Jews of the covenant, the Samaritans were indeed looked upon as inferior outsiders.. As revealed in the conversation between Jesus and the Samaritan woman, the woman noted to him of the discord as she said…

We note here that without demeaning the woman or her heritage, Jesus expressed that God had made the choice for the path of eternal salvation to arrive through the Jews. This is surely the reason behind the fact that Jesus’ apostles were sent out to proselytize Jews first, and not Samaritans. (see Matthew 10:5) Because of their "chosen-ness" the Jews were given first look at salvation. However, let us be clear about our reading here. This chosen status was... and is yet... not because of any human culture is considered better or worse than any other, for we all are sinful. God is not respectful of any particular peoples. The question we need to answer in our hearts is… “Just whose creation is this?” It is God who chooses from among the sinful who God will choose… and God had chosen!
Though God decided to reveal his mighty and salvific work through the Jewish people, though sinful, we know that Jesus worked to universally break the bonds of sin and evil... including this one-upmanship… human self-justification expressed… by paying the penalty for our sins. Jesus went to the cross to save all.

However, we see that sinful, prideful and prejudicial nature of human self-justification emerges again and again. Indeed, as example we have seen that two of our Lord’s disciples asked permission to call fire down upon the Samaritans, just as Elijah had historically accomplished. (see 2 Kings 1:9-17) We note that James and John did not believe that the enmity of the Samaritans was caused by the effect of national prejudices and bigotry, but instead attributed it more to their rejection of proper worship of God. With mental gymnastics pressed, they were not yet focused properly that the gospel was to be known by its universal mercy. The two men were sinfully ignorant of their own primal, ambitious motives hidden within their zealous character. Thus it was that our Lord moved quickly to prevent even an entertainment of such thoughts within the disciple’s leadership.

Truly Committed…
After Luke used this scene to demonstrate the universal nature of God’s grace, this second section within our reading concerned the nature of discipleship. He noted its character of being a singular calling. Discussed also somewhat in Matthew 8:18-22, we see that this discourse in Luke however was not earlier contained in Mark, written some fifteen years earlier. Therefore this section was likely drawn from a separate source that was common only to both Matthew and Luke, or it was available but left out of Mark for the sake of brevity.
Here, after we've read of the jealous wrestling of the apostles for power and position, Luke may have been warning against such behavior amid his own emerging churches. Luke thus addressed those who would attempt to hold their ambitions and priorities over against the determined call of God. The emphasis brought forth by Luke was that we as disciples are first called to follow as servants. We are willingly to go to the cross in similar and lowly fashion.
Thus Luke was saying to his audience, “Get your priorities straight!” Note in textual order, first came the telling about a person that stated his desire to follow Christ, but seemed not to have counted the cost. The lesson taught here is that we must lay aside our thoughts of acquiring great position or possessions in the world. So this text stands against the overzealous quest for huge cathedrals and lofty office.
Second but no less apt, was the next person who seemed resolved in mind to follow Christ but begged a short delay. Faced with the call to follow immediately, he retorted using the socially and lawful requirement that the care of parents even unto death rated very high. With him, the strict adherence to Law of Moses… and the possibility of his losing his inheritance, trumped the call of Jesus Christ. Indeed, we cannot serve two masters.
Finally, a third person was shown as willing to follow Christ but wished time to talk with his friends and order his household affairs. Therefore worldly concerns pressed upon his heart, and so also these became a burden which kept him from following Jesus.
Through each of these examples, Luke thus highlighted the singular priority of following Jesus Christ. He rightly stressed that no one can do the work of kingdom proclamation if they persist in setting other items first. Anyone who is a disciple must properly prioritize, attending secondarily to other matters of personal risk, familial ties, and inheritance. Any would-be Christian disciples who deem themselves worthy to follow… and wish to truly begin the kingdom’s work… need to consider these factors. This is the demand of discipleship. This is the core of carrying the cross! For building our character, we know that Jesus told his disciples that this yoke is easy and the burden is light… and as Luke revealed in the “Acts of the Apostles… the gift of the Holy Spirit is the power that makes it so.
However, we need to understand here that even among those who do resolve to follow, many fall far from beneath the shadow of the cross. It is then marvelous to note that indeed after God’s fire of judgment... forgiveness and deliverance may be claimed. God himself is shown to have worked in history through Jesus to deliver his Church. Indeed in the world today, we who are collectively sinful are still assailed by temptations, and too often fall victim. Yet the Holy Spirit rains upon the church the fiery spiritual waters of baptism. This falls upon those whom God alone has chosen. Once chosen... we have been eternally chosen… singled out by baptism…we become members in the work of an unfolding kingdom. We take on a renewed identity with singular allegiance. Through us, Jesus Christ works in the world. By following closely that which is written about him in a true and orthodox manner in scripture, we are called to prevent adherence to unworthy standards that cause us to wander aimlessly. Surely it was rightly said that once we have placed our hands as Christ’s servants upon the plow, we are not to look back.., lest we of the Church turn a crooked furrow and cause others to fall.
But know that we cannot and should not try to do this ministry alone. I say to you that according to the scriptures and the guidance of the Holy Spirit... we should keep our eyes on Jesus, and bow together at the foot of the cross.

Please be invited to watch our personal YouTube video witness...

May The Lord Bless and Keep You!