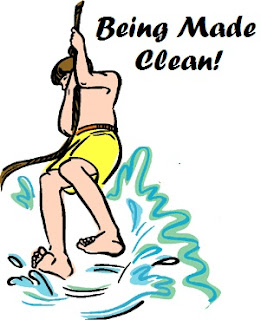 OUR BIBLE study for the Fifth Sunday after Pentecost comes to us from the Gospel According to Saint Luke. Within this week’s text, we read of confrontation between Jesus and powers of evil…

Then they arrived at the country of the Gerasenes, which is opposite Galilee. And as he stepped out on land, there met him a man from the city who had demons; for a long time he had worn no clothes, and he lived not in a house but among the tombs.
When he saw Jesus, he cried out and fell down before him, and said with a loud voice, "What have you to do with me, Jesus, Son of the Most High God? I beseech you, do not torment me." for he had commanded the unclean spirit to come out of the man. (For many a time it had seized him; he was kept under guard, and bound with chains and fetters, but he broke the bonds and was driven by the demon into the desert.)
Jesus then asked him, "What is your name?" And he said, "Legion"; for many demons had entered him. And they begged him not to command them to depart into the abyss.
Now a large herd of swine was feeding there on the hillside; and they begged him to let them enter these. So he gave them leave. Then the demons came out of the man and entered the swine, and the herd rushed down the steep bank into the lake and was drowned. When the herdsmen saw what had happened, they fled, and told it in the city and in the country.
Then people went out to see what had happened, and they came to Jesus, and found the man from whom the demons had gone, sitting at the feet of Jesus, clothed and in his right mind; and they were afraid. And those who had seen it told them how he who had been possessed with demons was healed. Then all the people of the surrounding country of the Gerasenes asked him to depart from them; for they were seized with great fear; so he got into the boat and returned.
The man from whom the demons had gone begged that he might be with him; but he sent him away, saying, "Return to your home, and declare how much God has done for you." And he went away, proclaiming throughout the whole city how much Jesus had done for him.  (Luke 8:26-39)

Demons and Pigs?
Within the text for this week comes a stretch for the modern mind. In the chasm Jesus steps boldly into the realm between the physical and spiritual. Here in this text he commands even demons, those powers which may inflict the whole being of a person. A confrontation emerges between a person who in nakedness and community ostracism, is described as a person who has a demon. The man cries out to Jesus, “What do you have to do with me?”
Without doing a lengthy study concerning the symbolisms found within the demonology beliefs of our faith ancestors who lived in a pre-scientific society, we may simply say that the person described in this text seemingly lived under psychological aberrations, and displayed neurotic or psychotic episodes that we find amongst us today. He may have also been afflicted with physical ailments that caused the demonic behaviors. However, scripturally we may say that the causative factors of the apparent illness were attributed rightly to demons that possessed due to human sinfulness… of either the man himself, the surrounding society, or both. Jesus’ immediate response was to challenge and accomplish gracious healing.
In questioning this text, we note that the man who suffered illness offered “Legion” as the name of the demon which possessed him. Interestingly, he was able to communicate with by naming the multiplicity of demons, occurring as many ills, sins and troubles. The name, that was used to describe such as a large Roman military force, was thus said by him to be a power that made his overcoming an impossibility.
The description of the interaction between Jesus and the demonic character, which is described as multiple ailments, is highly dramatic and symbolic. They were driven out. Interestingly, Jesus was described as allowing the demons to escape the bottomless abyss, and flee into a herd of non-kosher, unclean pigs. We wonder at our Lord’s wisdom of allowing escape for at time, rather than eradication. The resulting tumult, however, drove the “pig herd” to run pell-mell into the lake and drown. Combined with the lack of kosher cleanliness, the demonic ills were together destroyed by drowning in the water.
The man is thus calmed due to his being healed of his illnesses. Additionally, our gospel leads we who are readers to see our salvation as spiritually tied to water… likely the waters of Holy Baptism.
However, by doing this great healing, Jesus becomes feared by many of the populace. As the church today, we need to clearly note this reaction. The fear of this so great a thing was that he was given space for the moment, so that he could retreat into the nave of the disciple’s boat. It seems that his temporary retreat into the nave, is key to the future ministry of what it means to be the church... being secured from the hostile world by our collective worship experience.

Driving Demons Out; Saving the Pig?
More clarity comes to us as we ask why this encounter was related to the infant Christian churches of the gospel writer. These were faith communities that were breaking away from parent synagogue communities. I believe this text recalled and related an actual occurrence, one that was told to the church to enlighten those gathered. The story is recounted in answer to many situational and ongoing demons that plagued the community.
If we dare use this exegetical tact, I believe the story revealed great turmoil for the new, foundering Christians. It may be in answer to the many spiritual “demons” that afflicted early Jewish and Gentile converts who had hard choices to make… ones which could drive pietistic persons to distraction.
You see, the whole cemetery wherein their previous faith heritage lay dying was being turned upside down by the gospel news. Judaic preconceptions about the Messiah were being challenged. The Death and Resurrection of Jesus had overturned the Jewish faith expressions, and more… even the whole panorama of the Gentile nature gods was being challenged. Amid the turmoil, buried within a graveyard of erroneous and preconceived allegiances… came the healing story of Jesus. By the power of the Holy Spirit, the demons of confusion and doubt were thus being cast out from the lives of those early Christians.
In this casting those demons out, we note that afflicted infant church becomes spiritually well. They had been given leave to go into that which was considered “unclean”… the herd of the new Gentile membership. In retrospect, we note that they are not destroyed. We thus ask, "Did the pigs possess usefulness even in their evil? Do the demons of confusion, in legion... serve to drive us to seek salvation from beneath the cemetery of our own disobedience before the Law of God?" Indeed, "Was Luke saying to Christians of his day that the future of the church lay in being cast into the herd of ethnic multiplicity within the Roman Empire?" And more so, surely the herd’s being driven into the water was symbolic of water baptism.
I further consider as to whether the deeds of those in Luke’s readership, both Jews and Gentiles, possibly many viewed as “crazed” and obedient converts like the man healed, saw a miraculous healing. Do we not read that the demons of confusion drowned in the blessed waters of baptism? Shall we not consider how many persons in modern day are healed and commissioned now by baptism? It seems that as we who are persons being healed through the power of baptism, swim now as redeemed swine in the church made miraculously kosher before God. As his people restored, are we not fed the pods of eternal life from the hand of God and and bid to sit quietly at the feet of Jesus? I think that this indeed may be a proper interpretation. Consider now whether… as persons healed and made clean… should we not do as the healed Gerasene was instructed… "Return to your home, and declare how much God has done for you." So it is written.., so it shall be.