Of Bread and Fish... 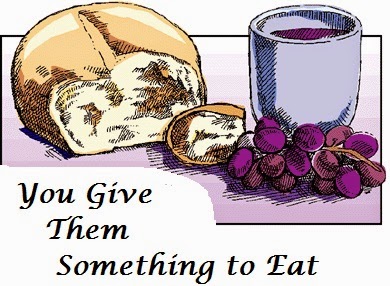 OUR READING for the Ninth Sunday after Pentecost comes to us from the Gospel According to Saint Matthew. In the reading, we have previously known that Jesus had just been told about the beheading of John the Baptist. The resultant effect was that Jesus tried to take his disciples away for rest. However, the needs of the people came upon him…

Now when Jesus heard this, he withdrew from there in a boat to a lonely place apart. But when the crowds heard it, they followed him on foot from the towns. As he went ashore he saw a great throng; and he had compassion on them, and healed their sick. When it was evening, the disciples came to him and said, “This is a lonely place, and the day is now over; send the crowds away to go into the villages and buy food for themselves.”
Jesus said, “They need not go away; you give them something to eat.”
They said to him, “We have only five loaves here and two fish.”
And he said, “Bring them here to me.”
Then he ordered the crowds to sit down on the grass; and taking the five loaves and the two fish he looked up to heaven, and blessed, and broke and gave the loaves to the disciples, and the disciples gave them to the crowds. And they all ate and were satisfied. And they took up twelve baskets full of the broken pieces left over. And those who ate were about five thousand men, besides women and children. (Matthew 14:13-21)
Click Here For Our Church Videos!

To A Lonely Place…
Our gospel writer parallels what had been written decades earlier in the Gospel According to Saint Mark. Thus we possess this wonderful story passed to Matthew about the meaning of discipleship. We also know that Matthew had previously related to his readers that John the Baptist had been executed. Now our author here described our Lord’s response to that event. Jesus gathered his disciples together. He wanted to take them away for a restful time, possibly a time of reflection and mourning over the loss. Sailing in a boat, being transported in a nave as it were… it seemed that a sabbatical was fitting for both rest and his teaching purposes. He and the disciples so went to a “lonely place” ( in Greek - eremon).
For listeners hearing this message in Matthew’s day, knowing that the prophetic words of John had been long silenced, they listened and heard that Jesus took both his own disciples… and those sent by John… to a quiet place. Jesus seems to have desired to turn his attention to their needs, ministering to those who mourned the loss of right and righteousness, rather than seeing to the needs of the whole of society around him. But the gospels revealed, that it was not to be so.
For example, the Gospel According to Saint Luke reports that having found where Jesus was, people went to the area of Bethsaida. They went to tell Jesus of their need. When they arrived, Jesus saw them. He immediately had compassion (in Greek – esplanchnisthe) upon them.
Suffering over those who were ill and disabled because of human sin, he worked to heal them. The gathering and healing continued until the end of that day. Eventually darkness came… and a great moment unfolded. What came afterward for the disciples was a prophetic event that pointed beyond itself… to future events which occurred later in Matthew’s telling. This instance we see as an example of a feast yet to come… the Last Supper held with Jesus’ disciples.
We note that Jesus commanded his disciples to gather from their own resources… which was seemingly a too meager amount of food. Taking this giving from them, he blessed the providence and then commanded his followers to distribute the resulting fare to the people. The miracle that occurred was then so profound that the record of it exists today written across all four gospel witnesses. We find that our reading here related that at least 5,000 men were fed… and more! Counting women and children, many biblical scholars calculate that the number related by Matthew could easily have been greater than 10,000 persons.
While some have said that the great numbers reported at the time was merely Matthew’s way of inflating the incident, and he was boasting that a “zillion people were fed”, against that charge we see with certain perspective that Matthew emphasized that exactly… twelve baskets of food remained. We therefore rightly stress for this teaching… that there was at least one full basket for each disciple… an “exact number. Cannot we then assume that the three thousand was exact as well? Was Matthew, therefore, telling his church and our own… that given our abundant receiving, we are to continue to feed both community and the world around us? Indeed so, but I believe the fare is to be more than bread.
Click Here For Pastor's Personal Videos!

Advanced Basket Weaving!
With the guidance from the Holy Spirit, it seems that Matthew related to his church… and we ourselves… that disciples are to participate in the miraculous event. We may do so if we dare in faith.
Please note the progression here! First, the disciples retired to a place set apart. As a Christian, I ask whether this resembles any house church or stained-glass adorned worship space the Spirit shall choose? I do believe so.
Secondly, do those who are hurting… made ill by the power of either personal or corporate sin… also gather even now to obtain healing? Again… I believe so. Surely there in an appointed sacred and set apart place… healing forgiveness is possible… where such as bread, fish and wine emerge as meager offerings. The resulting scene is that miracles of God’s grace spring forth. From the meager filling, a fullness of community and love spills forth. What’s more… there remains an abundance of grace left over to be taken out into the world.
Please be keenly aware of the scriptural correlation between the bread and the Body of Christ, but we sometimes struggle with the ancient imagery of the fish. To recall church history and explain that for the early Christian church… the fish took on a very special meaning.
Recall that the Greek word for fish is “icthus”. This word eventually became an anachronym scratched on amulets and bracelets worn by disciples. The symbol identified a person as a Christian. To Christians, the word became known as an anachronym which spelled out: (I) “Isuous” for Jesus, (CH) Christos, for Christ, (TH) “Theos” meaning God, (U) “Ueos” meaning Son, and finally … (S) “Soter” or Savior. The sign of the fish inscribed on an amulet thus became a late first century insignia that was often hidden from the hostile world… and was made more important by persecutions to come. We need remember this lesson of hidden strength today.
Let us more so remember that Jesus commanded his disciples to gather whatever their meager means… and without selectivity… and begin to care for the world around them. Therefore, it seems prudent for us to do just as the Holy Spirit empowered the early church of Matthew. We recall that they worked at a time of great persecutions, yet the Word of God empowered the hidden Church witness, work and feasting.
We also are called to work in this hurting world..., a world not always receptive to our Christian message. Given this fact, we are invited by our Lord’s resultant bounty of forgiveness and faith. We are to go out in ministry from the confines of the Church as our “lonely place”. To be sure, we are not to be driven inward by our own desires in navel-gazing for congregational growth or sanctuary preservation, but are sent by our Lord go out and proclaim the risen Christ! We are to care prayerfully and watch miracles occur. We are to gather the sinful, including ourselves… together… and “give them to eat”. We are to work the sure and certain numerology of Matthew, who said “five thousand men” and more.
This is a daunting task to be sure, but we of the Church who are fed miraculously from the bounteous basket of our Lord, are prompted by the Spirit toward confession and repentance. Let us not doubt the Holy Spirit! Then we are provided the eternal gift of His real body and blood for the forgiveness of sin. We are strengthened to finally receive an admonition to go from our Lord’s feast… and freely share the Good News of his kingdom. Thanks be to God!
Please be invited to view this video contribution... "In Desolate Places"
May The Lord Bless Your Evangelical Efforts!