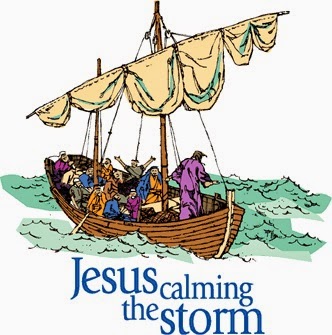 FOR THE Tenth Sunday after Pentecost we hear once again from the Gospel According to Saint Matthew. In the reading our witness provides us with a word portrait of our Lord and his power over creation…

Then he (Jesus) made the disciples get into the boat and go before him to the other side, while he dismissed the crowds. And after he had dismissed the crowds, he went up on the mountain by himself to pray. When evening came, he was there alone, but the boat by this time was many furlongs distant from the land, beaten by the waves; for the wind was against them.
And in the fourth watch of the night he came to them, walking upon the sea. But when the disciples saw him walking on the sea, they were terrified, saying, “It is a ghost!” And they cried out for fear.
But immediately he spoke to them, saying, “Take heart, it is I; have no fear.”
And Peter answered him, “Lord, if it is you, bid me come to you on the water.”
He said, “Come.”
So Peter got out of the boat and walked on the water and came to Jesus; but when he saw the wind, he was afraid, and beginning to sink he cried out, “Lord, save me.” Jesus immediately reached out his hand and caught him, saying to him, “O man of little faith, why did you doubt?”
And when they got into the boat, the wind ceased. And those in the boat worshiped him, saying, “Truly you are the Son of God.”  (Matthew 14:22-33)
Visit Pastor's Personal Videos!

Overwhelming Authority…
This text was likely written in Antioch of Syria by Matthew’s church within in the eighth decade of the first century. The script faithfully repeats a story told decades earlier in the Markan gospel. We consider then that Mark’s writing likely was one of the sources used by our Matthean writer. The story is also found as penned in brief account, in the Gospel According to Saint John.
Somewhat startlingly to biblical students, however, is that the account does not appear in Luke’s gospel. This was so, even though Luke is believed to be written during the same decade as Matthew’s gospel, and the Lucan writer seemingly used much of the same resources. We might rightly ask then, “Why was this wonderful historical tradition included in Matthew and not in Luke?”
I believe the answer to this question may be found when we consider the community of the writings. Let’s ask ourselves, “Was either a conflict or a consensus present in that locality that made Matthew include this section and the following story? Did it address an issue that was not important elsewhere for the emergent churches of Luke?”
While it may have been a simple practicality that made Luke omit the account, possibly because of available space limitations in the parchment. In my opinion it seems more likely that there was an issue of authority that was being challenged in Matthew’s audience. This issue was seemingly not important for contemporary Lukan communities, but was far more important for Matthew.
You see, the population of the church in ancient Syria was likely challenged far more by traditional Hebrew politics and theology than in Luke’s diaspora communities. Here we can see that the text we examine today, not found in Luke, does firmly establish the authority of Jesus over all of creation.

WARNING! Deep Water…
Additionally, we read in this story echoed from the Markan tradition… about how Jesus went “alone” to the mountain to pray. Meanwhile the disciples rowed a good distance out from the seashore on their own. To me this sounds uncomfortably like many a Church population that leaves the sanctuary on any given Sunday. Subsequently we know that here, in somewhat prophetic fashion for any person or church that tries to go it alone, the waves described in the story became very violent.
We may ask, “How violent?” I say to you.., “Very!” Look closely and compare the story from Mark (see Mark 6:45-52). We note a slight change of text for the writing of the Matthean church. In Mark the church made their way “painfully” as the waves flowed “against” them. Here in Matthew, however, we note with emphasis that they were “beaten” by the waves. Though this linguistic difference seems subtle, I think it significant for us as we consider this text. We can ask, “Was Matthew’s church beginning to encounter a greater storm in later decades than their earlier counterparts found within Mark’s church?” For our purposes here, let us assume so.

Can’t See Stars?
If we follow this assumption with the fact that in both accounts the environment portrayed was “dark”, so much so that it was the darkest… the fourth watch of the night. It was during this time of deep mystical uncertainty that our Lord came to them. Jesus arrived striding as Master upon the turbulent water. Jesus thus demonstrated divine power over the natural forces of creation… even those that can cause death. We note here, that Matthew does not relate that he immediately calmed the waters. The gospel writer instead told us that the disciples first thought that he was a fearful ghost (in the Greek - phantasma). Indeed of such horrid, ghastly were phenomena like devouring mermaids, who citizens believed would lure and drag pre-scientific persons from the nave of their boat into the realm of the sea dragon.
However, in answer to their cry, Jesus came walking upon the turbulent water. He drew near… and his words echoed perfectly… repeated exactly from Mark’s gospel. Our Lord thus stated instruction to the Matthean church community… which was going through a dark time of authoritative uncertainty…

Graceful Salvation!
We note also with great importance that the second part of the story was read initially only to the Matthean church of the late first century. It was written during a time when waves of stress and persecution were growing high for those early Christians. The reading gives credence to my thoughts that this is why the second scene, which is not found in the other gospels.., related rightly the story of Peter’s watery walk. It was told to a church who had inherited the traditions and stories told by that great apostle. Matthew told his church of the startling and miraculous event wherein blessed Peter got out of the boat… and surprisingly walked on water in faith. But now consider the mind of the hearer! Even the one upon whom Jesus told he would build his Church, soon found the watery tempest a bit more than his faith could handle.
Certainly! Consider that they were told that even blessed Peter sank and began to drown, but in rather baptismal representation he was rescued from the drowning water by our Lord. Peter then, in being bold found that indeed the Lord is not a vaporous entity, a ghost… but was, and yet still is for them and us… very real and very God.
Jesus is not a phantom that lures to death, but is the Son of God who would give them the power of the Holy Spirit (in the Greek - hagios pneumatikos). The Spirit was given to the whole Church and they dared to believe even more so. The Holy Spirit, not a harmful ghost, is also very God… the One who hovered over the chaotic waters of creation at the beginning of all things. Consequently, the Spirit that Christ Jesus sends is the Spirit of himself that provides those in the Church with life eternal through baptism.
Watch Our Worship Videos!
The story tells each of us, therefore as Christians, to hold tightly to the hand of God who comes to us walking on baptismal water. This is the message of Matthew written using the seafaring imagery familiar in the culture. Consequently, the Matthean writer clearly stated that Jesus Christ is Lord over all of creation… even to the point of mastery over nature, drowning, death, demons, and the Dragon. The writer thus related to us long ago about our having faith over against persecutions and doubt. We then should reflect as people who walk in the footsteps of the disciples… and know that whenever we fail due to fear, we are called to receive heart, shall rise up and forever proclaim Jesus Christ as Lord. I offer that of such is the miracle related by Matthew. It is very good to be found yet rowing in the nave.
Please be invited to view this video...
Deep Troubles!
May the Peace of God that surpasses all human understanding, keep your hearts and minds in Christ Jesus our Lord.   Amen