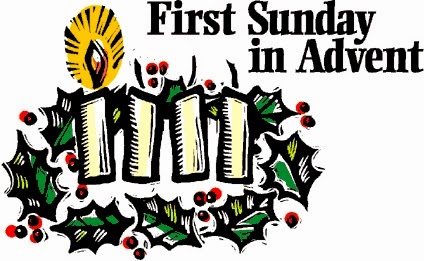 FOR THE First Sunday of Advent in the new church year we hear from the Gospel According to Saint Mark. Rather than starting at the beginning of that gospel record, however, our text relates to a prophetic statement said just before the arrest of Jesus. Our Lord's words thus echo to us about coming events…

“But in those days, after that tribulation, the sun will be darkened, and the moon will not give its light, and the stars will be falling from heaven, and the powers in the heavens will be shaken. And then they will see the Son of man coming in clouds with great power and glory. And then he will send out the angels, and gather his elect from the four winds, from the ends of the earth to the ends of heaven.
From the fig tree learn its lesson: as soon as its branch becomes tender and puts forth its leaves, you know that summer is near. So also, when you see these things taking place, you know that he is near, at the very gates. Truly, I say to you, this generation will not pass away before all these things take place. Heaven and earth will pass away, but my words will not pass away.
But of that day or that hour no one knows, not even the angels in heaven, nor the Son, but only the Father. Take heed, watch; for you do not know when the time will come. It is like a man going on a journey, when he leaves home and puts his servants in charge, each with his work, and commands the doorkeeper to be on the watch. Watch therefore—for you do not know when the master of the house will come, in the evening, or at midnight, or at cockcrow, or in the morning— lest he come suddenly and find you asleep. And what I say to you I say to all: Watch.”
(Mark 13:24-37)

Looking Ahead!
We need to more fully comprehend this prophetic text as given to the early Church. In this way we may derive direction for our own day. To do this, to assist us… let me offer that we first must note that our lesson is a word picture painted upon a larger canvas. The picture came forth from our Lord as a longer talk that preceded this text. The subject was about future desolation to be soon expected… and the ultimate delivery of the Christian people.
Since the lesson involves all of us then, the text rightly needs to be understood from the prediction that Jesus gave concerning the fate of the temple in Jerusalem. At the time, the discussion began as the young rabbi taught his disciples after leaving the temple. He told them that the time was soon coming that one magnificent stone of the temple would not be sitting on top of another. We find that this gospel message is mirrored later in Matthew, Chapters 24-25, and in Luke 21:5-36. Here in Mark, however, it seems that we have the earliest written account.
Whether this text came to each gospel writer from either an oral tradition or pre-Markan writing, we do not know. We do know, however, that this more concise gospel is thought by some historical biblical critics as written shortly after the desolation of the temple in Jerusalem by the Romans. That tremulous, destructive event in the life of Israel, happened to the Judean religious temple system in 70A.D. Therefore, since recorded in this gospel as written less than a decade later, the text here is barely subsequent in time to that historic fulfillment event.
Consider this! In the previous text, Mark related that Jesus sat teaching his disciples on the Mount of Olives, across from the temple. Jesus forecast that they would receive persecutions, and be beaten… and ridiculed concerning him. Our Lord taught that when they saw the desolation of that great temple, trouble would be coming upon all. Christians would even be blamed for its destruction. Jesus further told them that many persons would come and claim to be the Christ.
As history would prove, the Roman war upon the temple cult and its followers unfolded just as prophesied. Temple life and light was quenched for the Jews at the siege of Masada, Given this, the claim is that subsequent to that unfolding for the writers of this gospel, the disciples clearly remembered the words of Jesus. Those who had been keen students of the prophets were made aware that this horrible event mirrored those prophetically spoken about many centuries before.
For the stars of the heavens and their constellations
will not give their light;
the sun will be dark at its rising
and the moon will not shed its light.
(Isaiah 13:10)
The community responsible for this gospel writing remembered that teaching, and penned this text immediately for the readers of the Church around the empire... declaring that the here and now had arrived. They lifted up the vision of the unfolding kingdom. For their readers back then, the present age was emerging out of their recent historical darkness and held both foreboding and Light for the Church. The temple had been plundered and destroyed. The desolation of Roman symbols stood tall in the temple and the those foreign authorities had desolated the sacrificial offering fires. The pleasant world of scripture readings within the Jewish synagogues had turned unstable… even hostile toward Christians. Tumultuous and confusing events of the day certainly made it seem that the sun no longer showed them the way forward. The moon seemed not to illuminate their path and guide those faith travelers through darkness. The stars… followed by mystics that we might guess were representative of the many leaders of the Judaic religion who had once seemed solidly fixed in the heavenly realms… had fallen. Israel was dispersed. The deserted wayfarers of the early Christian church were therefore feeling quite blind.
Miraculously amid this desolation started by the desecration of the temple... followed by the massacre of Masada and the scattering of Jewish religious communities... a brightness miraculously showed forth. Consider that the infant community was truly realizing the enduring gift of the Holy Spirit. Through revelation they knew that the Son of Man was already present among them, and Jesus Christ was coming again.
You see, a rather difficult name for some of us, “Son of Man” was the title given by prophetic writing as describing a special person. That man was a Deliverer, who was promised as sent to the world by God the Father. The Hebrew prophet Daniel had described him…

I saw in the night visions, and behold, with the clouds of heaven there came one like a son of man, and he came to the Ancient of Days and was presented before him. And to him was given dominion and glory and kingdom, that all peoples, nations, and languages should serve him; his dominion is an everlasting dominion, which shall not pass away, and his kingdom one that shall not be destroyed.
(Daniel 7:13-14)

We know that before the fall of the temple, Jesus had repeatedly taught that the Son of Man was described as the fulfillment of prophecy. The Son of Man was taught to be the one who would come with heavenly messengers... and his angels would boldly speak the message of salvation. They would gather his “elect” from far and wide. Consequently, by the time of the gospel writing, baptized believers knew the risen Jesus Christ, the Son of Man... had sent the Holy Spirit upon the Church. They knew by in that day that the revealed Son of Man and the Son of God were one in the same. In this way they knew the future calling of the universal church. They were being called out by God from the time set even before the gospel's writing. We can therefore say that the early Church was created at Pentecost and yet is eternal.
Indeed since that era, the Church stands beyond any particular location and time. Therefore the gospel had stated what was already happening, what was about to happen… and then offered us the wondrous message from  God about what to do until the End of all things arrives.

Be Not Afraid!
In this last portion of prophecy, we moderns often get most confused. However, be comforted that we have had much company. Worry over the delay of those fearsome and yet wonderful end times seems problematically inherited, especially so for those who still possess sinful and finite minds. Even blessed Saint Paul expected things to happen sooner. Take note however! Both the disciples and the early church of Mark were told by Jesus in a simple agricultural analogy that things would unfold just as the events were described. Jesus instructed that the divinely-directed progression would occur and the saving gospel would go out fully in all earthly directions. Today, we need presently to note the “all” word here.
The example of the fig tree teaches us clearly that from the first speaking by our Lord on the Mount of Olives, events were already unfolding for the Christian church. His followers knew by the time of this later writing that they were to do as instructed. They were to “watch” in an active way. Anticipating the end times by faith then, they did watch. The Lord had said that “this generation shall not pass away” until they would see "all" that which was described. Indeed, they actively watched. As promised they knew the prophetic words of Jesus were, and still are true… for that generation was given and yet still has eternal life. That generation shall never pass away!
They did so, and saw the unfolding of the kingdom. Out of the ashes of temple flames and dispersed Judaism rose the eternal Christian church. Repeatedly, this is why the early Church was told to actively… “Watch!”
Visit Pastor's Personal Website!
What then does this mean for us in the Church today? I believe that we are still in the growth stage. I offer that the fig tree is still springing forth toward greater flowering. Those who walked before us in faith watched, and recalling these words they saw the beginnings of what would come to be today.
I emphasize that as sinful people saved only by grace through faith given in Christ Jesus, neither our predecessors nor we... have even yet come close to seeing the full majesty of the kingdom. Each new day, and each liturgical year of the church at Advent... spells out a surprising newness of gospel proclamation. Thus as a Christian pastor I say to you now… “Do not stand still, brothers and sisters in Christ!” Watch actively, working in faith... knowing that our eternal Lord has not left us uprooted, and shall be among us again. When that End time does come for us, we shall stand together with those who have gone before us. Together we most certainly shall see our loving God as he was, and is, and ever will be… as truly revealed in Christ Jesus, who is the Alpha and the Omega, the Beginning and the End... who is our Lord. To this I say again and again... "Come Lord Jesus, be our guest!”
Please be invited to view this video...
May The Lord Enable Your Watching!