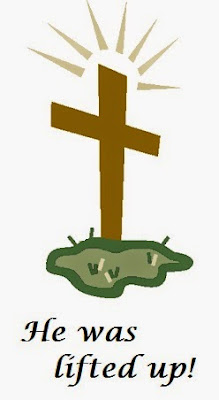 FOR THE Fourth Sunday of Lent we read again from the Gospel According to Saint John. In this reading we hear a catch phrase condensation of the gospel message. Jesus portrays the stark difference between condemnation and God’s loving salvation.

And as Moses lifted up the serpent in the wilderness, so must the Son of man be lifted up, that whoever believes in him may have eternal life.
For God so loved the world that he gave his only Son, that whosoever believes in him should not perish but have eternal life. For God sent the Son into the world, not to condemn the world, but that the world might be saved through him. He who believes in him is not condemned; he who does not believe is condemned already, because he has not believed in the name of the only Son of God.
And this is the judgment, that the light has come into the world, and men loved darkness rather than light, because their deeds were evil. For every one who does evil hates the light, and does not come to the light, lest his deeds should be exposed. But he who does what is true comes to the light, that it may be clearly seen that his deeds have been wrought in God.  (John 3:14-21)

Heavy Lifting?
As told by the writer of this gospel, Jesus moved his conversation with Nicodemus from declarations concerning himself, to focusing the man’s attention on the work being done. Referring to an important past event in the travel of Israel from its bondage in Egypt, Jesus pointed to the consistent love of God. He reminded that God had been working constantly toward redeeming his people. In this, Nicodemus was reminded that a serpent had been “lifted up” on a pole in the desert by Moses. In John’s literary fashion then, the image carried multiple meanings down to us.
You see, for the Jews the bronze serpent represented the poisonous snakes that had afflicted the people who were escaping through the desert during the Exodus. These snakes were present as they were fleeing from Egypt. For us, we can understand their confusion. Many of them asked, “Is God with us or not?” We can comprehend that we humans sometimes do trade one terrible situation for yet another. However, the story of the serpent staff recalled for Nicodemus that anyone who had followed God’s instructions religiously during that escape, who kept their eyes on the bronze serpent mounted on a pole… was transported safely past a most horrid danger. Nicodemus was himself proof that for Israel the trip was worth it.
We are reminded by history, however, that even this graceful act was sinfully perverted. The purpose of the bronze statue was eventually distorted so that worship of the snake began. The heresy became so severe for the people that the symbol became a false idol… a snare that was held up before the Israelites. They even began to burn incense to the bronze snake, offered under the name “Nehushtan”. The practice became so prevalent for the ancients that the prophet Hezekiah dealt with that heresy in his work of faith reformation. He had to smash the standard (see 2 Kings 18:4).
Much like we ourselves in modern day, we find that our faith ancestors were thus misled. Rather than worship God who had delivered them, the Hebrews sinfully worshiped the object. We thus ask, "How many in our modern churches also ignore God so to worship heirlooms." Nonetheless, lest we condemn them without looking at ourselves, please note that we today see that a similar image ironically appears before us. We see it in the logo of the modern physician. The physician’s symbol known as the “Caduceus”  is the symbol translated from the Greek  word“κηρύκειον” (kērukeion). It means “herald's staff". Differing only in snake appearance in that the physician’s staff sports two serpents, the insignia announced the arrival of a false Greek god. Thus by this scripture we Christians are taught not to worship a beloved physician, nor a clergy person... as a false god.
The example set by the prophet demonstrated that we are only to worship God who sends the physician or clergy to us. Any healer who assists us on earth are those persons ministering in the midst of the penalty levied upon the whole of sinful humanity. Sin results in our present finitude according to scriptural Law. Therefore it is that the Law of Moses drives us to seek salvation, and God... as the Great Physician... offers relief. Through scripture rightly taught we learn of God’s love revealed as the Father works in healing us eternally. . .  through Jesus Christ, his Beloved Son.
In the dialog of this gospel lesson, therefore, Jesus established that the finite bronze snake was replaced. God would lift up his planned salvation on a pole! This perfect gift cannot be perverted. God gave up his only begotten Son upon the wooden cross. As Nicodemus was told, Jesus Christ was the one being “lifted up” to die on a Roman standard… the cross of Golgotha.
Immediate questions should form in any unbelieving mind. “Why would God do such a thing for the disobedient? Why would God be so gracious to any human being who was judged as sinful since the very beginning of life?”
The answer was told plainly by our Lord. Jesus revealed the Truth to Nicodemus in a concise and memorable message of divine, perfect love, God chose to offer up his only Son, Jesus Christ. Our Lord indeed died for the world… for us and our salvation! In a wondrous reversal of earthly ways, God took away the horrid evil snake and his perfect Son was offered up. He was the One lifted on the cross in suffering, shame and tragedy. Jesus therefore revealed himself to be the singular Blessed One who forever heals our illnesses. The only proper response for us now is faith in his perfect actions made on our behalf.
In dramatic fashion then, John established that through Jesus our Creator, God reversed the deadly effects of poisonous evil. Gone was the powerful bite of the serpent who had tempted humans since the Garden of Eden. Upon the cross, Jesus became cursed and killed instead. In blessed exchange, we who believe in his graceful act are saved from the finality of death.
Therefore guiding our thoughts in scripture, John held up that God loves us. Just as Light sheds light and the fire of the Holy Spirit burns eternally, so it is that God loves us eternally. There is no in-between! God has done this most certainly and we are called to respond to the revelation.

What Do We Now Hold Up?
In short, we are not to worship anyone or anything except God, whether representing before us a human physician, clergy, principality or power. We are not to wear a bejeweled-cross pendant or earrings emptied of sacrificial meaning... worn just for decorative purposes. We are to worship God alone.
We are to wear and carry the cross solely in remembrance of Jesus’ work. For you see, through the penalty of the cross Jesus Christ died in our place. By doing so he purchased eternal life for those who would believe in him.
Therefore know that we are sinners all. We need to read the stark imagery of darkness and light in this gospel. Note from our author that there is no grey area available. We cannot casually believe. We cannot observe milk-snake religious practices by just limiting ourselves to Christmas and Easter. We either walk wholly trapped in our sinful, dark unbelief or become secure in the Light.
Click Here To Visit Pastor Tom's Personal Website!
Be not deceived! For we must know that this salvation is not our doing. Faith in Christ is not a work of our own. The Holy Spirit brings the witness of scripture before us. Who shall you serve? The serpent? A mere human physician? Some sinfully short-sighted clergy? Or shall you serve your true Savior Jesus Christ, the Word of God... the crucified and Risen One?
To those who would ignore these words and thus cast my questioning aside without answering… I say to you that not to decide is still a decision. Take heed, and consider God’s offered love during this season of Lent.

May The Holy Spirit Guide Your Witness!