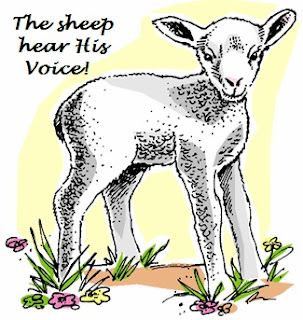 OUR GOSPEL lesson comes to us for the Fourth Sunday of Easter from the community of John. This lesson speaks to the whole church, especially those of us who now walk in faith after the story of the Resurrection has been told to us once more. It reminds us of the eternal truth which our Lord had earlier spoken, that we may now be guided forward in ministry…

It was the feast of the Dedication at Jerusalem; it was winter, and Jesus was walking in the temple, in the portico of Solomon.
So the Jews gathered round him and said to him, "How long will you keep us in suspense? If you are the Christ, tell us plainly."
Jesus answered them, "I told you, and you do not believe. The works that I do in my Father's name, they bear witness to me; but you do not believe, because you do not belong to my sheep. My sheep hear my voice, and I know them, and they follow me; and I give them eternal life, and they shall never perish, and no one shall snatch them out of my hand. My Father, who has given them to me, is greater than all, and no one is able to snatch them out of the Father's hand. I and the Father are One." (John 10:22-30)

Looking Back?
The Jewish teachers in the temple gathered in the court of Solomon. They were upset that Jesus laid open claim to the title of “Good Shepherd”. The claim surely raised Jesus stature from an itinerant country rabbi, to one of the Messiah… the one appointed by God who had the power to guide God’s people. Those educated in the writings of the prophets thus could call to memory the sacred words...

“Behold, the Lord God comes with might, and his arm rules for him; behold, his reward is with him, and his recompense before him. He will feed his flock like a shepherd, he will gather the lambs in his arms, he will carry them in his bosom, and gently lead those that are with young.” (Isaiah 40:10-11)

The tumult challenged temple leaders, in that this event occurred during the anniversary of the Dedication of the Temple. The annual celebration marked the restoration of Israel’s temple and its centralized priestly power, after sacred items had been desecrated by Antiochus Epiphanes in 164B.C. In the worldly power struggles of that earlier event, the temple had been looted, burned, and the blood of swine poured upon the altar. We can easily guess that the minds of those who exercised temple power in Jesus’ time feared tumultuous mood swings in the Jerusalem population. Those fears could be stirred by any rebellious shepherd trying to wrestle power from the priests… to form a power center that may give rise to the Romans acting similarly to Antiochus Epiphanes. The tension that this lowly teacher created was thus very threatening for many who listened, and yet soothing to those who considered themselves as downtrodden and powerless.
You see, the foot of foreign domination was very heavy upon the neck of Israel… just as that captivity which they had felt in earlier times. Thus it was that the jealous priestly caste took great interest in what Jesus answered. There was much comfort at stake when they hypocritically asked him, “If you are the Christ, tell is plainly.”
A prophet had foretold that our Lord’s answer as Messiah would surely come out as it did…

"For thus says the Lord God: Behold, I, I myself will search for my sheep, and will seek them out. As a shepherd seeks out his flock when some of his sheep have been scattered abroad, so will I seek out my sheep; and I will rescue them from all places where they have been scattered on a day of clouds and thick darkness.”  (Ezekiel 34:11-12)

With vested interest the scribes and priests heard Jesus’ answer with alarm. The statement that the powers in the temple heard from Jesus on that day challenged the very foundations of everything the priestly caste thought they had secured.

Centralized vs Diaspora?
The writer of John, as he related this event, communicated this scene to the various powers within his church during the latter days of the first century. “Why?” we might ask. We note rightly here that there are no parallels of these passages occurring in the synoptic gospels of Matthew, Mark, or Luke. Thus should we assume that John had definite intent? Written in approximately 90A.D., what was the issue his communities exclusively encountered that made this telling so important?
In response, if we consider the turmoil that was to come out of the gospel scribe’s setting, I think we may also acquire guidance for our own time. You see, Jesus’ confrontation as recorded in the Johannine text, likely brought forth memory to the writer’s Jewish audience…

"Woe to the shepherds who destroy and scatter the sheep of my pasture!" says the Lord.  Therefore thus says the Lord, the God of Israel, concerning the shepherds who care for my people: "You have scattered my flock, and have driven them away, and you have not attended to them. Behold, I will attend to you for your evil doings, says the Lord. Then I will gather the remnant of my flock out of all the countries where I have driven them, and I will bring them back to their fold, and they shall be fruitful and multiply.
I will set shepherds over them who will care for them, and they shall fear no more, nor be dismayed, neither shall any be missing, says the Lord.
"Behold, the days are coming, says the Lord, when I will raise up for David a righteous Branch, and he shall reign as king and deal wisely, and shall execute justice and righteousness in the land. In his days Judah will be saved, and Israel will dwell securely.” (Jeremiah 23:1-6)

We note here the movement from the plural “shepherds” to the singular “Righteous Branch”. In this citation, I find a key to the mind of John. For in the days of Antiochus, before the Jewish Temple destruction, great theological power struggles existed between the temple cult and those who attended synagogues in the Greek diaspora. The subsequent attack on the temple cult by the worldly political Antiochus kept Israel dispersed temporarily, and caused disorganization of the Temple cult. But the diaspora survived… and the cult rebounded through the warp and woof of Judean wars. They endured until the temple was restored.
By the time of Jesus’ ministry, the restored temple powers had grown and zealously guarded against any further challenge. Thus Jesus’ very existence in their midst was a threat. Hence the cry soon came… Crucify him!
In John’s day, therefore, the issue for the early church became… “What form should the infant Christian church rightly assume?” Should the infant Christian church be centralized? Or should it simply exist in the “haustafel” house churches. Or finally, “Should both carry the gospel forward?” Today, we in the church also rightly must ask these same questions.
Surely I believe that the historical tensions of church polity were already at work for John, as evidenced not only here, but in the history of Paul’s dispute with Peter at Galatia many years earlier. With the early church nearly crushed in Jerusalem at the time of this gospel’s writing, the Christian communities had scattered, forming as removed from centralized Judaic temple influence. This occurred in answer to Roman attack on that structure. Then, with new church establishment and growth in various population centers of the Rome Empire, John may have been casting a wary eye upon those more powerful Christians who began to emerge in Rome’s own centralized “Portico of Solomon”
I believe some bitter, stiff straws were being laid in the manger of John’s diaspora churches. His community stood on the thresholds of great Christological controversies that would challenge the faith expression. He pointed his communities beyond the homes, sheds and catacombs that sheltered each and every stubborn sheep who would try to lay private claim to the Lord’s mangers. He boldly challenged the growing church and pointed them back to the One who is the risen “Good Shepherd”. He boldly stated that Jesus Christ said of his sheep…

Thus in John we hear this declaration that Jesus holds parity with the Father… that their will is the same. We need hear this in today’s world, for the church wrestles again with demons of power structure in both church and government. These parties pit the church of Christ over against those that would read onto scripture messages that which forward their own political causes upon the right interpretation of gospel message. I fear that we who are immersed in this turmoil often tend to lose our focus. I offer to all that in the fray, we as Christians within any denomination or fracturing thereof, need to remember what was told to us in John. Jesus said, “I and the Father are One”.
We are therefore called by this text to stay as His sheep. We are all reminded toward that which the gospel of John says in his introductory Trinitarian preamble… “In the beginning was the Word, and the Word was with God, and the Word was God. He was in the beginning with God…”
I echo this in the power of the Holy Spirit… that we are called to be the “one” apostolic church in Christ. We are called by scripture rightly-interpreted to be reconciled with God through Christ Jesus our Lord… even so while both sinful and forgiven. In this way we may yet work toward the proclamation of the gospel.

For Those Who Wish To Participate In Our Effort!