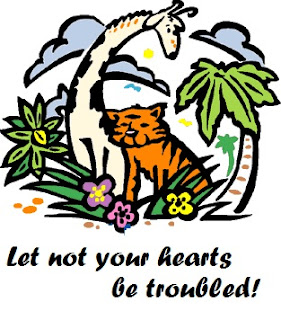 FOR THE Sixth Sunday of Easter, many in the church of Jesus Christ hear a message of promised peace and hope coming from the Gospel of Saint John…

Jesus answered him (Judas, not Iscariot), "If a man loves me, he will keep my word, and my Father will love him, and we will come to him and make our home with him. He who does not love me does not keep my words; and the word which you hear is not mine but the Father's who sent me.
These things I have spoken to you, while I am still with you. But the Counselor, the Holy Spirit, whom the Father will send in my name, he will teach you all things, and bring to your remembrance all that I have said to you.
Peace I leave with you; my peace I give to you; not as the world gives do I give to you. Let not your hearts be troubled, neither let them be afraid. You heard me say to you, 'I go away, and I will come to you.'
If you loved me, you would have rejoiced, because I go to the Father; for the Father is greater than I. And now I have told you before it takes place, so that when it does take place, you may believe.  (John 14:23-29)

In! Not Of…
The reading we peruse here is singularly within the Gospel According to John, though similar discourses appear in Mark 13, Matthew 24, and Luke 21. The discussion we study here occurred in the upper room as Judas… who was an apostle, but not the betrayer Judas Iscariot… asked our Lord a question. He said, "Lord, how is it that you will manifest yourself to us, and not to the world?"
This question reveals to us that the disciples were beginning to realize that a difference exists between what we shall know as disciples, and what will be comprehended by world around us. In answer to the question, Jesus promised his followers a peace that the finite world cannot have. The world cannot know it because without accepting him, God’s infinite peace is not given. This perfect peace, one that is beyond understanding, is only given by God through the gift of faith given in Christ Jesus.
Jesus assured those who were gathered with him that though he would be going to the Father, they would not be abandoned. He told them that when the Holy Spirit came to them, they would learn even more. Jesus explained that in the future, the presence of the Father and the Son would always be with them. However, the gifts given through the power of the Holy Spirit (hagios pneumatikos) would provide a faith which is grounded in peaceful certainty. That promised certainty would eternally be their possession, and that peace was one which the world would not comprehend without the Spirit’s teaching.
The answer supplied by Jesus, therefore, was revealed by John as occurring during the latter portion of the time he spent with them in the upper room. The words were spoken, just before the statement, “Let us go hence.” Then they went out into the Garden of Gethsemane.
The discourse had revealed the profound distance between the limits of human finitude, and our infinite God working before them. The text speaks of the disciple’s mental confusion and spiritual unbelief. Profuse questions arose from them when faced with this miraculous telling, for the words that Jesus told them had impressed that with God the impossible was possible!
Given that this discourse was in John, and is not found in the other gospel records, the ground was laid that this recollection of Jesus’ teaching was likely designed to specifically bolster the faith of the Johannine churches. John pointed out sharply that the disciples, though not initially understanding, and stumbling thereafter during the days of crucifixion… firmly followed the Risen Christ after the Holy Spirit descended upon them. Was he not then, saying that in future days the Church would need to recall these words?
This seems as so. Historical records reveal to us that Christians of the late first century were struggling mightily under Diocletian persecutions. Therefore we ask, “Was the writer of John calling these formative churches in the Greco-Roman diaspora to put their trust wholly in God? Was he asking them to trust the empowerment and teaching of the Holy Spirit so that they will continue strong in faith and future growth?


We know that during this time in history, that the emerging Church split from the synagogue world around them. This is evident because of John’s expressed acrimony over against “the Jews”. For John’s churches living the world in which they and the synagogue communities strove, the gospel declaration separated them by faith declaration. When their witness was successfully made, the abyss of separation from the traditions of the synagogue became more profound. This was concretely evidenced by later persecutions. These persecutions persisted and worsened as Church history unfolded. Emphasis was thus placed by John on maintaining the needed clarity of message and community faith adherence. The text points out, however, that this clarity and faith is only obtained from the Spirit. The message concerning the Holy Spirit is therefore of prime importance for all who read.

“But the Counselor, the Holy Spirit, whom the Father will send in my name, he will teach you all things, and bring to your remembrance all that I have said to you. Peace I leave with you; my peace I give to you; not as the world gives do I give to you. Let not your hearts be troubled, neither let them be afraid.”

The peace given from Jesus Christ through the power of the Holy Spirit is therefore different from the finite peace or strength that the world knows. The Spirit is the one who stands alongside (paracletos) the Church as trials continue. The Spirit witness needs no substantiation by human science, religious or political power, media or statistic. The Holy Spirit, which is the Spirit of Jesus Christ... is provided by God. The Spirit miraculously provides faith to us. Just as water and wine becomes the body and blood of our Lord for us by the power of the Spirit, infinite peace is also made manifest to us only by the Spirit.


You Are Invited to View Pastor's Personal Videos!

Peace Be Yours!
Therefore, we may individually conclude here that since the Church is yet embroiled amid powers that struggle against the Spirit, we shall find this message as heartening. It is the message that John communicated to churches in the latter turbulence of the first century, a message that still speaks to us in our day. Though the profound image of the Crucified and Risen Christ often fades from our minds as the weeks from our exuberant Easter celebration progress, we are yet sustained. As both familiar and new challenges arise around us and amid our ranks, each attempting to wrest us away from orthodox and traditional faith expression, we see that just as the years may fade memories of those who have gone before us into death… we are surely brought back to true faith and heartened by the Spirit’s power.

Blessed ones, we can know that in Christ we are not limited by our own sin and finite human waywardness. By this eternal Word given to us in John, we know that Christ Jesus related to his disciples concerning the third person of the Holy Trinity. Thus he pointed out to the disciples, to John’s audience... and we ourselves, that the Spirit shall work in us to forgive sin, teach us and give us peace. In doing so the Holy Spirit preserves the Church. Thus even in our own day and within this troublesome world, we know that the Church shall continue in faith until the time when everything promised is fulfilled. So it is written, and so it shall be.