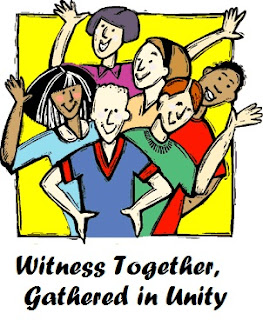 THE GOSPEL lesson appointed for us on the Fifth Sunday of Easter is read from the witness of Saint John. In reading the gospel message we can grasp an echo of what Jesus had spoken on the way to the cross. We are reminded of the guidance given to the disciples before the Crucifixion, words that emphasize to us of spiritual oneness. We are to be one, like our predecessor saints in faith. We are to be in, but not of the world around us. We thus hear across the centuries from the gospel witnesses that the church gathers to love and worship God.., and to love one another.

“When he had gone out, Jesus said, "Now is the Son of man glorified, and in him God is glorified; if God is glorified in him, God will also glorify him in himself, and glorify him at once. Little children, yet a little while I am with you. You will seek me; and as I said to the Jews so now I say to you, 'Where I am going you cannot come.'
A new commandment I give to you, that you love one another; even as I have loved you, that you also love one another. By this all men will know that you are my disciples, if you have love for one another." (John 13:31-35)

Disciples on the Way
In this scripture, while the Last Supper is an event not offered by John, instead we have a transition to the farewell discourses that occurred in the Garden of Gethsemane. For John, the period we have here is surely transitional. The disciples in contrast to the same persons portrayed as sleepy followers described in the synoptic gospels, pay attention to Jesus. They want to hear… but are told that they cannot follow.
Without parallels in the gospels, therefore, this reading reveals a conversation about Jesus’ relationship to the Father. The text notes the glorification of the Son of Man. To glorify, by definition, is to accomplish honor for the Son of Man, and thus magnify the loving essence of Father and Son of God relationship. Therefore, realizing the being of Jesus as the fullness of humanity and fullness of God, here we witness the relational oneness in purpose as expressed in the Easter event. A duality of natures is thus reinforced, a duality which eventually lays the cornerstone for Trinitarian theology when the Spirit comes upon the disciples. Within the upcoming Crucifixion and Resurrection events, unitized by the Johannine author, this central, redemptive conversation is played out before all of creation, but especially is displayed for the early Church gathered. The time of persecution is already upon them. A later text in the Johannine gospel, enhances these relational words...

“When Jesus had spoken these words, he lifted up his eyes to heaven and said, "Father, the hour has come; glorify your Son that the Son may glorify you, since you have given him power over all flesh, to give eternal life to all whom you have given him.  And this is eternal life.., that they know you, the only true God, and Jesus Christ whom you have sent.
I glorified you on earth, having accomplished the work which you gave me to do; and now, Father, you glorify me in your own presence with the glory which I had with you before the world was made.”  (John 17:1-4)

The divine redemptive dance between the Father and Son is thus portrayed. In the Crucifixion and Resurrection all that was needed for human salvation was accomplished through Christ. But then, though not comprehended by the disciples, Jesus tells his followers that things are going to change. With rather endearing terminology, John’s parchment tells of Jesus affectionately describing all gathered as “little children” (teknia eti mikron). He thus set the stage for John’s churches. As children following their Master, their Teacher, understanding was not yet within their reach.
He continued, “You will seek me, but as I said to the Jews I now say to you, “Where I am going you cannot come.”
However, here again comes this term, as written “the Jews” (Ioudaiois) in the Johannine witness. The term becomes troublesome for many who wrestle with John’s witness. Historically, we find that if we use broad pen strokes in defining the identity of Hebrews for yesterday and today, the term leads to anti-Semitic rantings that are much out of place. Some have carried this anti-Semitic language to foment travesty, which occurred during the Spanish Inquisition and more recent Nazi persecutions. These mistaken thoughts exist even today. Here we thus argue firmly against such views. For John, you see, the “Jews” had a more narrow and specific definition.
Indeed, Jesus related in the gospel witness that things are going to change. For John’s community, and for us, the key meaning comes through the writer’s historical use of the “Jews” identification. If we receive the gospel within the context of its writing, we know that by the late 1st Century, the Christian communities of John were being ostracized by certain Jewish powers within the synagogue communities. These were the “Jews” of whom Jesus spoke, and John writes. Many were those who would never comprehend the gospel. However, we must also recall that John had numerous Jewish persons within the Church. The churches to whom he wrote was an entity that drew from Semitic, Greek and Roman populaces. These Jews are not discouraged in the Pax Romana, but were also lifted up.
By John’s day, however, certain Jewish authorities were persecuting the infant church, just as certain Jews persecuted Jesus unto death. This was being accomplished throughout the Jewish diaspora by synagogue leaders using zealous Roman Empire oversight. Therefore, methods used for persecutions were primarily twofold, but used for multiple reasons. First, in the synagogue, the Christians were being separated from the Jewish orthodoxy by rabbinical fiat. For example, we note that the Christians communities were leading away many of the synagogue populace, and likely considerable “treasury” along with them.  To make the case for reaction to this movement, we cite that within his book entitled, “History and Theology in the Fourth Gospel (New York, Harper and Row, 1968), author J. Louis Martyn notes that Jewish leaders were quickly moving to excommunicate Christians. We may guess that most synagogue leaders thought to get rid of them quickly, before greater damage could spread. As example, by 85A.D. in the city of Jamnia, under the authority of Gamaliel II, it was decreed and standardized that pious Jews must recite the “Eighteen Benedictions”. In recitations of this text, heard was..,

“for the apostates let there be no hope… And let the arrogant government be speedily uprooted in our days”.

“Let the Nazarenes (Christians) and the “minim” (heretics) be destroyed in a moment. And let them be blotted out of the Book of Life and not be inscribed together with the righteous.”

If any Jew would falter in their recitation of the text during worship services, they would be immediately cast from the synagogue and separated from any community participation. As well, great social pressures were applied from civil authorities.


Those who were practicing Christian, as we note in Galatians, by virtue of their freedom in Christ no longer needed to remain “kosher”.  Thus we see that stalwart and religious Jewish businessmen would find it in their best economic interest to see heretics persecuted. If a Jew no longer had to buy “kosher” as a Christian convert, those kosher food and sundries dispensers who had their products blessed by the rabbi because they were considered as a pious butcher, baker and candlestick maker, would lose profitable trade. Thus historians lead us to see that the Christians were persecuted because of their non-conformity. They were eventually accused of “cannibalism” by Jewish detractors, in that it was known that the Christians received the Lord’s “body and blood” during the celebration of the Eucharist. Charges were laid thus against them in Roman courts.
Hence we see that John’s gospel rails not against the Jewish people in general, for indeed many in his pluralistic community were Jews. Instead, using this generic term, the gospel warned through recollection… that for the time before the Resurrection, neither Jews nor Greek disciples could follow where the Savior was going. Jesus said they all could not follow. The gift of following to the cross was not the Lord’s to provide as he journeyed to Jerusalem. If it were not for the sending of the Holy Spirit, the Advocate, all hope for their following would be eternally lost. Instead, the gift of the Holy Spirit given at Pentecost was key.., and needful for the birth of the church.

Witness in the Spirit!
In the midst of societal turmoil, therefore, we see that the Johannine gospel exhorted Christians of the early Church to understand how triumph is accomplished by God alone. This victory is not accomplished by human effort, or knowledge, but through faith given by the Spirit. This faith will be witnessed in their sight. They are told to walk toward that final day in concert. And, by staying spiritually close, they shall be giving witness to others. Jesus said…

I believe this mandate looms large in today’s environment as well, for we Christians have our faith challenged by established, but errant church entities. Our witness is also threatened by worldly powers of state who challenge the worship and social practices of those baptized into Christ. Surely, we as disciples are called by this message to gather, love God, and love one another. We keep in mind that the type of love demanded by our Lord is “agape”. Therefore divine and sacrificial, in gathering for worship and feeding upon the Word poured out and consumed, we are sustained and empowered through persecutions and our weariness. In this way, the Father who sent the Son into this world that we might be saved, shall guide his “little ones”. Having faith strength thus given by the Holy Spirit, our path onward into the future is laid out before us.