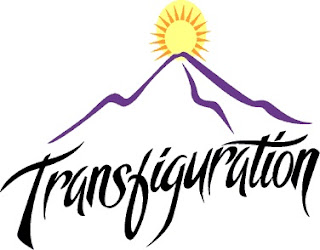 OUR READING for Transfiguration Sunday comes to us from the Gospel According to Matthew. However, as the church of Christ, we are called to also note the presence of this same lesson in the writings of Mark and Luke. This seemingly indicates the high importance that the early church writers held for this text. Here we read...

And after six days Jesus took with him Peter and James and John his brother, and led them up a high mountain apart. And he was transfigured before them, and his face shone like the sun, and his garments became white as light.
And behold, there appeared to them Moses and Elijah, talking with him. And Peter said to Jesus, "Lord, it is well that we are here; if you wish, I will make three booths here, one for you and one for Moses and one for Elijah."
He was still speaking, when lo, a bright cloud overshadowed them, and a voice from the cloud said, "This is my beloved Son, with whom I am well pleased; listen to him."
When the disciples heard this, they fell on their faces, and were filled with awe. But Jesus came and touched them, saying, "Rise, and have no fear."
And when they lifted up their eyes, they saw no one but Jesus only. And as they were coming down the mountain, Jesus commanded them, "Tell no one the vision, until the Son of man is raised from the dead."  (Matthew 17:1-9)


Brighter than Bright…
As we begin reading our lesson through for meaning, the mindset that the text is largely mirrored in other gospels comes through. However, the images that we receive from the other records changed slightly as each community tailored the witness according to the need for relating accuracy and necessity, while using the available parchment resources and community environments. For example, we know that the text found in Mark, being likely the earliest written and possibly the original source document for the later two accounts, says that the event occurred “after six days”. The later Lukan dialog seems to disagree with that assessment, saying that the event occurred after “about eight days”. We may ask then about the scriptural difference?
I contend that either the “about” vacillation found may be occurring because of cultural beginnings and endings of days; or the writer of Luke did not hold to the time span with similar importance of the other gospel writers. This last may be reasoned that Luke may be addressing communities more infused with Gentiles. For these latter persons, the six day interval was therefore not held up as important.
More for our study, however, is that the imposed chapter break found here in this reading separates the flow of events.  Jesus had just said in the previous chapter, that some of the disciples would not die before the Son of Man would be seen coming in his kingdom (Matthew 16:28). The selection of Peter, James and John then followed. The event, being only days after the former scene… likely occurred at Mount Hermon, near Caesarea Phillippi. This is located close to where the Lord had been doing ministry in the earlier chapter. To expand a familiar maxim then, what the apostles found upon climbing the Mount of Transfiguration was that there was far more to their lowly rabbinical teacher than met the eye.

We find that the text related that Jesus was “transfigured” ( Greek – “metamorphothe” or “bodily changed” ). Therefore the miraculous event occurred there as the three men were present as witnesses. Jesus was suddenly far more than they previously had seen. We note that for the privileged apostles… another miraculous fact was also revealed… in that Moses and Elijah were also seen as present talking with Jesus.
We need remember here, that according to Hebrew scripture the lawgiver Moses had died and was buried, and the prophet Elijah had been transported to heaven on a chariot. Consequently, both were far beyond the habitation of men. We thus ask… “Are these two, therefore, representatives of both the Law and those prophets which spoke and yet still speak through scripture in concert about the Son of Man?” If so, the event spoke boldly to the Sadducee who did not believe in eternal life and the Pharisee who only adhered to the Law… as the latter being the Torah in the first five books of the Bible. Here then I believe is where the high importance of the event for the synagogue community of Matthew emerges.
You see, Moses is clearly described as glorified. Thus to the initial readers he represents the redeemed of God that had already passed through the gate of death into the kingdom. Elijah, also  being glorified, represented also those who had entered the heavenly realm alive by the will of God… and still yet have prophetic mission ( as exhibited by John the Baptist ). Thus the three disciples present, who were not yet glorified… were representing Israel. "Israel" was therefore redefined here in Matthew, as a future kingdom of both Judaic believers and nations to be brought into the kingdom.

We note a minor change in witness here, in that Matthew said that while Peter was still speaking... the Spirit spoke to them. Oh, this is epic! How sinful man is… blabbing on when he should be listening. Noted however, is that some words of Mark are here omitted, possibly in that they indicated that Peter was somewhat flabbergasted. In Luke also, he seemingly muttered the booth building proposal because he did not know what else to say. Subsequently, we ask whether it is possible that the later-written Matthean gospel deliberately portrayed Peter in more favorable light? The gospel record seems to indicate this possibility because Petrine influence was stronger for that community… while Pauline influence was found as more evident in the Markan and Lukan churches. Is this the competitive church nature of which Paul spoke?

As the scene unfolds as written in Matthew, an inclusion also occurred. The voice heard from heaven said that … “This is my beloved Son…: and continued further … “ with whom I am will pleased.”. The latter phrasing is strictly Matthean. In this way, this late account links us linguistically backward in time… to the occurrence where John baptized Jesus at the Jordan River. Therefore the author deliberately connected any surviving followers of John the Baptist to the message. This might indicate that they may have yet had influential presence within the writer’s community.
Given that the event is recorded by all three synoptic gospels, the whole Christian church is molded by the hearing of the happenings on the Mount of Transfiguration. Given the revelations found here, we see that many factors were brought together by the event. Characters who represented both the Law and prophets met together with Jesus, with three prominent disciples as audience. The Spirit of God spoke to the befuddled apostles present, and they were instructed not to divulge their knowledge concerning the identity of the Son of Man as the Son of God… until all things are revealed! This last empowerment would not come to pass until the Spirit of Pentecost brought the Church into being.

Rise, Have No Fear…
At this point we may ask, “What is the meaning of this text for the Church today?” Are we readers who are so far removed in time from the church of Matthew still called to receive eternal Truth? The descriptive text of Matthew relates a moment in time that fulfilled a certain prophetic closure. During the days of Moses the nation of Israel was formed. During the time of Elijah walking upon earth, that same nation wandered far from God… so much so that the land became torn apart and exiled. Prophetic time brought revelations that occurred pointing far beyond that day. During that era, Elijah was prophetically empowered to tell of the corporate resurrection to a widow at Zarephath. If we recall that prophetic resurrection scene, during a time of sinful drought… life was restored to the widow’s son. Centuries later, though there are some today that argue that the young man brought back to life was simply resuscitated by CPR, the resurrection of Jesus Christ after three days was recorded as prophetically authentic by the infant Church. That nation which was previously exiled unto death into Babylon was therefore gathered not by happenstance as a geographical return credited to Greek and Roman-ruled conquest, but by the Son of Man crucified and Risen.

Now Is The Time!
For the early Church, this time of waiting and fulfillment was hard to fathom, as evidenced by Peter’s reaction. He was wrong at the time to work for the physicality of heaven here upon earth. Even today, whatever tabernacles we propose to build in efforts of progressive religion or politics, to make for ourselves booths in our world… we must always remember to prayerfully ask God for fulfillment. As answer to this danger, we must look to scripture for our foundation. At the time of the Transfiguration, booths could not be built. The sacrifice of Christ upon the cross was not yet offered. Important future actions were not yet to be done by Peter and his companions.
Our answer now is that we should mirror that which is historically revealed to us in scripture… in both Old Testament and New Testament. Note that Jesus, as revealed by the power of the Spirit on the Mount of Transfiguration, was revealed as both Son of Man and Son of God. This Jesus, born into the world and divinely shown, took upon Himself the penalty of death for us. He took our punishment for denial and unbelief… dying on the cross to save us… and was then Resurrected by the love of the Father. In this way he gave us eternal life. The divine plan was shown as long planned to be portable, available to all persons by the vision on the mountain, and soon afterward that plan was completed and provided by our Savior.

Consequently we today are called to see more clearly the glistening message related to the followers in Matthew’s infant church. God’s love surely endures forever.., but God’s love was poured out particularly though Christ… freeing us from the ritual offerings of Moses and from the exile that followed the time of Elijah. Revelation of our sinful separation from God was shown through the Law and the prophets, but in the days of the apostles God was shown as doing a new thing.
You see, by gift of the Holy Spirit, our Lord preserved for us this reading… so that we may see that our future today is secured on into eternity. Just as Jesus our Lord was baptized by John, we too are baptized. Just as the apostles saw the glorious revelation of Light we too may see that same Light. Christ Jesus arose from the grave and we shall arise unto eternal life in accordance with the promise. So the words of our Lord still reach across the centuries to us. Let us hear this message clearly on Transfiguration Sunday… for Jesus said to his followers… “Arise, and have no fear.”  Thanks be to God.

Please be invited to view our ministry videos on YouTube...