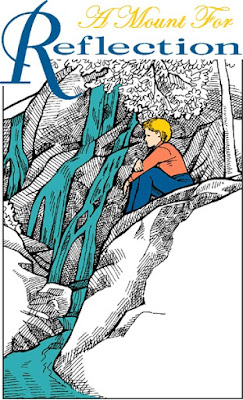 WE READ from the Gospel According to Matthew for the First Sunday in Lent. In this lesson we are taught by the author of the writing that just as the Son of God builds our faith, there are powers in this life that would challenge our earthly walk.


Then Jesus was led up by the Spirit into the wilderness to be tempted by the devil. And he fasted forty days and forty nights, and afterward he was hungry. And the tempter came and said to him, "If you are the Son of God, command these stones to become loaves of bread."
But he answered, "It is written, 'Man shall not live by bread alone, but by every word that proceeds from the mouth of God.'"
Then the devil took him to the holy city, and set him on the pinnacle of the temple, and said to him, "If you are the Son of God, throw yourself down; for it is written, 'He will give his angels charge of you,' and 'On their hands they will bear you up, lest you strike your foot against a stone.'"
Jesus said to him, "Again it is written, 'You shall not tempt the Lord your God.'"
Again, the devil took him to a very high mountain, and showed him all the kingdoms of the world and the glory of them; and he said to him, "All these I will give you, if you will fall down and worship me."
Then Jesus said to him, "Begone, Satan! for it is written, 'You shall worship the Lord your God and him only shall you serve.'"
Then the devil left him, and behold, angels came and ministered to him.
(Matthew 4:1-11)

Led Beyond Temptations
A reading previously presented in Matthew stated that Jesus was baptized by John, and was declared by the Spirit to be the Son of God. As that scene closed, in continuing the faith witness... the next scene found our Lord being driven into the wilderness by that same Holy Spirit. Jesus went there for prayer and fasting. We emphasize the word “led” used in today's reading (from the Greek- anechthe). This use attests that Jesus went not by independent action, but we may considered him fully as a human being directed by another entity… i.e. the power of the Holy Spirit!
Originally, the witness in the earlier written gospel by Mark’s community related the wilderness trials only briefly. Only two verses told of the time spent there (see Mark 1:12-13). Why is this so, we may ask? I consider that either the knowledge of what had occurred in the wilderness was not fully known by the community of Mark, or the story was not relevant to the primary theme of the writer. Also, we may entertain that Mark simply omitted the account due to the shortness of that earlier gospel scroll. The incident may have simply been relinquished to the cutting room floor.

We see in comparative gospel research, that Matthew agrees greatly with the Lukan account (Luke 4:1-13). We may subsequently conclude that because Mark was very brief... and both later-written gospels related the event with greater detail… the information found in the later gospel witnesses came from a separate, common revealed source. This means that these two witnesses offered the story from that second source... so to increase the guidance needed in the respective communities of Matthew and Luke.
This being true, we can now focus upon this needed guidance and ask certain questions. First, “Who was physically there in the wilderness to record what happened?”  As we read, we see that only Jesus was led by the Holy Spirit into the countryside. The Devil challenged him there.
Given this as fact, we further ask, "If they were the only ones there, how then did the Church receive the story in order to write it down?" It is unlikely that our Lord's adversary would highlight the encounter, since that power was cast successfully aside. Hence we must conclude that the story came to the early Church directly from Jesus. If so, the account was told to the Church later by a disciple through the power of the Holy Spirit, in order to accomplish a certain purpose. I believe that purpose was to strengthen those who were part of the early Church.

We know that Christians began to struggle mightily under severe persecutions in the unfolding decades of the first century. Thus when we consider the source of the fully developed story, from a reconstructed writing that we now call the lost “Q” document… we find its unfolding was likely developed very early. The time of origination from Jesus (c. 30 A.D.), and its being told further during following decades... brings the date to be in concert with the time of Mark's writing (c.68-70 A.D.). Thus, “Q” was subsequently added to the contents of the other two gospels... Matthew and Luke, which were written down in final form by about 85 A.D. Thus the account is presented as a story directly stemming from Jesus teachings which found its way later into the two synoptic gospels.
If we can accept this premise and outcome, using form criticism we can now note that this text seems to be a stand-alone story skillfully woven into that earlier document.  For this reason, we may ask... “What were the Matthean and Lukan communities encountering at the time… that the Markan community was not contending with in earlier days? What spurred the inclusion of this expanded narrative with the account from Mark?

I consider that since the later gospels related increased tensions between Christians and the firmly entrenched traditional Judaic faith expressions, we may conclude that much greater isolation was occurring for the early Church. Also, persecutions had been pressing very hard upon the Christian communities. However, being those who certainly were convicted by the Law of Moses, but yet pardoned for the sake of Jesus Christ… the late first century Christians were provided by Jesus with a new law... a law which set them free for service in the growth of the kingdom. Therefore the wilderness story was written as a new guidance to help those communities. The teaching we find here was a method for their dealing with both the historically entrenched Jews... and the Gentile world aflame with evil. The lesson speaks also across millenia to us as we live in a world that is becoming even more hostile to our salvation and ministry message.


Lenten Discipline…
Our path as Christians, like that of this faithful ancestral community, should unfold as we are led by the Spirit. We need to go forward just so as our Lord was led into that wilderness. Consequently, we are especially called by the Spirit to engage in prayer and fasting during the coming forty days of  Lent. By doing these rituals we shall gather discipline by restraint, through such as this gospel's message reminding us of our Lord’s tribulations in the wilderness.
Remember! Both Word and the Spirit strengthen us. Where Jesus was tempted by Satan; so we too are also tempted. The words that Jesus spoke in answer to evil are a prescription given that strips us of fear. They strengthen our own resolve as we work plodding through this often hostile, modern world. Therefore, in the challenges of the coming Lenten season we know surely Satan shall whisper again to us that all is vanity. We shall be tempted to fall away and lessen our seriousness and witness. Consequently, know that to ward off these attacks, only prayer, discipline and a knowledge of Holy Scripture will suffice to strengthen and guide us.

Note that we have been given the advantage! The community of blessed Matthew did not have all that we have. The early Church did not have the New Testament. They were writing it! So blessed ones, note that our Lord quoted from scripture that was available in his time. And indeed we are called to do so as well. However, now we have a far wider foundation than our historical predecessors… thus we may be empowered into the doing of even greater things! We can cite as witness not only from the Law and prophets, but also from the Gospels and the letters preserved from the early Church. With this great storehouse of God’s Word provided, we most certainly speak of Jesus Christ with great resolve.

Note that we are called as the Church to witness in the world, and in this God shall empower and defend us. As we tread forward in witness this season, know by the Spirit’s revelation that we are not giving in to the temptations of building our world in our own sinful image. We are brought safely down from that dangerous precipice. We are kept from taking that road paved into hell laid out by the luring, undulating switchbacks of social acceptance. Through the power of the Holy Spirit, we have our feet firmly planted on solid biblical ground. Temptations shall leave. Messengers of God shall minister to us. Let us be guided only by scripture rightly interpreted and proclaimed. Thanks be to God!

Rough Roads ahead for the Church? Watch this pastoral message...