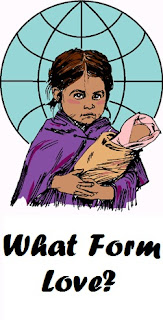 OUR READING for this week comes to us once again from the Gospel According to Saint Matthew. A continuation in message thus occurs that began with the “Sermon on the Mount”. Within this reading, we hear from our Lord again concerning the radical ethic to which we as Christians are called…

“You have heard that it was said, 'An eye for an eye and a tooth for a tooth. But I say to you, do not resist one who is evil. But if any one strikes you on the right cheek, turn to him the other also; and if any one would sue you and take your coat, let him have your cloak as well; and if any one forces you to go one mile, go with him two miles. Give to him who begs from you, and do not refuse him who would borrow from you.
You have heard that it was said, 'You shall love your neighbor and hate your enemy.'  But I say to you.., Love your enemies and pray for those who persecute you, so that you may be children of your Father who is in heaven; for he makes his sun rise on the evil and on the good, and sends rain on the just and on the unjust.
For if you love those who love you, what reward do you have? Do not even the tax collectors do the same? And if you salute only your brethren, what more are you doing than others? Do not even the Gentiles do the same? You, therefore, must be perfect, just as your heavenly Father is perfect.” (Matthew 5:38-48)

Radically Far?
In continuing sermon discourse, Jesus related to his listeners the call of discipleship for his followers. Jesus supported the Law as expressed in Torah, but called his followers to go beyond the many person-to-person casuistic mandates. First, our Lord asked his audience what was written in case law, as it spoke about retaliation. Scriptural law clearly indicated that retaliation was personal, and not judicial nor governmental. Within the edicts of law, therefore, there was permissible redress given (lex talionis).
Jesus cited this example of legalistic mandate that had been repeated again and again in the scriptural teachings… in that an “eye for and eye” was thought to be just and fitting. (as found in Exodus 21:24, Leviticus 24:20, and Deuteronomy 19:21). However, Jesus called his followers to entertain doing a radical response.
Indeed, though retaliation was surely lawful, Jesus called his followers to move beyond the Law. They, and we also today… are empowered by the Holy Spirit. Therefore we are privileged not to seek the legal right. In other words, Jesus wanted to seek in that Hebrew audience, those who would follow him and exhibit the radical response of love poured out. Jesus indeed stated that personal, physical affront was to be cast aside.
First of all, our Lord said that property was not to be at issue in discipleship. Second, if a disciple’s time was required by another, as was customarily found in ancient Persia when mail was transported, so that a dignitary could force a person to do carrier service for a mile or more… a disciple was called by Jesus, not only to do so willingly, but we are called to go even farther.
As we witness here, Jesus pointed his Judaic followers of the day beyond the Law… toward a radicalization of life. The result was that a new behavior pattern is formed on how disciples should act in the building up of the Kingdom. His instruction indicated how we ought to act even now. Therefore, the telling factor for us is whether the Spirit is present and showing forth in our lives. By this we are told how far we are willing to go in response to another’s challenge. We are to be in the evil world, but not of the evil world.
In this discourse then, Jesus disclosed the radical chasm between sinful being and the character of God. If we are truly disciples even in a small sense, we can grasp the Righteous characteristics of our Creator. We clearly see the chasm between the finite and the Infinite; between sin and purity.
As sinners we stand condemned, for we too are those who grab the beard and insult others. We too often demand undue patience and rob for ourselves that which belongs only to God. Then if God does not thwart our self-centered purposes… and even the harm of death occurs… beneath the old Law we jump quickly to offer our self-justifications. Such is the satanic deception rooted in the depths of our very souls.
God has thus restrained his wrath in love toward us, and has redeemed many through his Son. Thus, if we be truly his followers… his disciples… we must then do benevolence in likewise fashion. This causes us to do, to become… the very law of love which is far removed from our natural instincts. We are brought to realize that our steadfast example is God himself, as shown before his disciples through Christ our Lord. Looking at Jesus then, can we as sinful followers more clearly see his Way? We recognize that through the cross our Creator made provisional example for us through His Son.
The instruction of our Lord is that we, like our living Lord, are to suffer any injury that can be borne for the sake of peace, and in doing so commit our concerns to our Lord's keeping. We are to avoid personal striving against the world’s evil. If any of us say we cannot pass by an affront, our Lord reminded that only by the power of the Holy Spirit can we fulfill the mandate. We are called to rely wholeheartedly on the spiritual support of Almighty God.

Uniquely Made!
Jesus, with the deliverance of this message, was indeed already steeped in struggle for our whole being. Our Lord taught us on that mountain that we must all do the real acts of love to everyone… especially to those who are not easy on us. Obviously, this must hold true when we deal with all enemies of Christ and the furthering of his message… whether they be such as atheist, agnostic, Hebrew, Muslim or Hindu.
We must pray for them. While many in the world only render good for good; we are bid by our Lord to even render good for evil. This behavior ethic springs from the love that was poured out that caused Jesus to accept death upon the cross. Remember! Even while we were sinful.., while we were far from God, while we were spoiled children and wastrels in the world… Jesus died to redeem us. This speaks of a far nobler ethical principle than mere sinful men may claim under the Law.
Thus as followers in the footsteps of our Lord, to build up the kingdom the gospel... the Word who is Christ Jesus our Lord is clear. We see this in St. Paul’s Letter to the Romans…

“Repay no one evil for evil, but take thought for what is noble in the sight of all. If possible, so far as it depends upon you, live peaceably with all.
Beloved, never avenge yourselves, but leave it to the wrath of God; for it is written, "Vengeance is mine, I will repay, says the Lord."
No, if your enemy is hungry, feed him; if he is thirsty, give him drink; for by so doing you will heap burning coals upon his head. Do not be overcome by evil, but overcome evil with good.”  (Romans 12:17-21)

You see, in this world we tend to salute only those who agree with us and embrace those of our own opinion. However, we are called not to confine our love. It is the given prerequisite of Christians to seek perfection in grace and holiness. Having been given the example of God’s love poured out, in that Jesus went to his crucifixion to show just how far God will go for those who may accept his grace.., we see that we too are called. We are to conform ourselves to the same example of our heavenly Father. As apostolic scripture indicated…

“Therefore gird up your minds, be sober.., and set your hope fully upon the grace that is coming to you at the revelation of Jesus Christ. As obedient children, do not be conformed to the passions of your former ignorance, but as he who called you is holy, be holy yourselves in all your conduct; since it is written, "You shall be holy, for I am holy."
And if you invoke as Father him who judges each one impartially according to his deeds, conduct yourselves with fear throughout the time of your exile. You know that you were ransomed from the futile ways inherited from your fathers, not with perishable things such as silver or gold, but with the precious blood of Christ, like that of a lamb without blemish or spot.”  (1 Peter 1:13-19)

Being a people forgiven in Christ, therefore, we see that more is expected from his followers than from others... for the sake of still others. Let a decision concerning a hostile force or any person be decided by the love of God, and love of neighbor. Ask what is the loving thing to do. We are called to decide in love. While this may seem a daunting task, we have solace that we are maintained by the Holy Spirit’s working. This promise is present in the church. We are redeemed by Christ and sanctified by the Spirit. Consequently, we find support for our task through regular, right and mutual uplifting of prayer to God our Father. In this way, more strength is found in us than in others, for the sake of those who are not yet in the kingdom. Let us therefore beg of God that we who are redeemed by His Son, Jesus Christ, are enabled by the sacrifice of Jesus to prove ourselves also as right sacrifice… and redeemed children of the Heavenly Father. So it is and so it shall be.