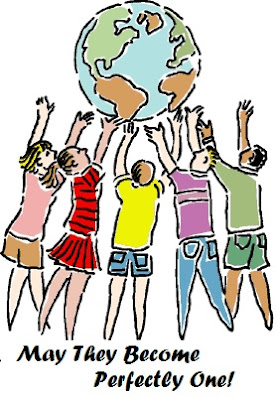 For the Seventh Sunday of Easter, we read once more from the Gospel According to Saint John. In this week’s gospel, we hear words of a prayer spoken to the Father by Jesus. In these words which occurred during the Last Supper, we hear our Lord’s petitions concerning the disciples… and those who would follow after them in faith.

Why One?
In the upper room where Jesus gathered with his disciples, he had prophesied many things to them. As the conversation drew to a close however, Jesus turned his attention to the Father and began to pray departing words before his gathered followers. The emphasis of his prayer concerned the unfolding future of his disciples, and any persons who would come along afterward to walk in faith. Heard by those apostolic witnesses, Jesus petitioned that his disciples would be one with himself and the Father.
The word glory we understand from the Greek as having a wide application. It broadly carried a literal, figurative, and objective or subjective usage. Here it seems to indicate, however, that Jesus wanted his followers to literally participate in the unified dignity and respect that eternally existed between the Father and the Son. Jesus was asking the Father that those who would be left behind by his Crucifixion should be given this gift. Thus they would not be abandoned.
The dignity God gave in response, therefore, was a literal quality not earned by any disciple, but yet freely given. Jesus, by enduring the unfolding plan of divine salvation… went to the cross, paying the penalty for human sinfulness. He offered up before God the price for the glory requested from the Father. He offered this gracious gift freely on behalf of those who believed and would come to believe, His life was then, and eternally is now… consequently the price paid for our perfect, eternal restoration and communion with God..

Why Recalled?
When we delve further into the reasons for the writing of this prayer in the gospel of John, we consider the turmoil that was going on in his churches at the time of its writing. These were churches to which this gospel was first written. By studying their setting, we can find a message for us as we live now in our own age. For the situation in life (sitz en leben) in John’s churches, we see that the life they once knew was falling apart. The infant church of the late first century was being tossed about by hostilities. Therefore, John used this prayer to point out that just as the faith and unity of the first disciples had been challenged, and the Holy Spirit kept them together after the Crucifixion and Resurrection of Jesus in spite of those threats, so was the eternal Church to be sustained through turmoil by the power of the Holy Spirit.
In this prayer, therefore, the Johannine community heard words concerning not only the apostles, but their own situation as well. Enlightened by these words, both the church of John and we ourselves who now gather… may realize that while not always being accepted by the world... we are perpetuated by the grace of God.

The disciples were told that the message would endure. Thus the churches who came after them, and the followers od Jesus Christ who were in the midst of splitting away from synagogues and persecuted by the Roman authorities.... also knew peace even when meeting in the catacombs of cemeteries. These foundling communities were needful of this strengthening message. Jesus had prayed that his followers would be one with himself, and one with the Father. Thus they would be eternal as God is eternal. This good news was given by John by the power of the Holy Spirit. Those of the early Church, therefore, had surety of oneness in baptism and the Holy Eucharist. Each time they gathered, the event became a truly divine moment of togetherness.

What Does This Mean For Us?
Though sinful then, as we gather in similar fashion we may seek our own “agogic” (togetherness) moments. These can occur gracefully within our individual church communities. We are sustained and reminded that we too are forgiven and made part of a great divine power working within the world about us. 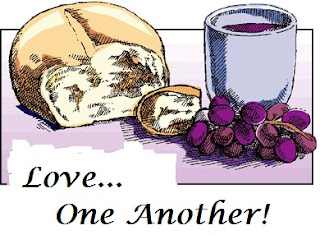 You see, though we in the church may find divisiveness in our midst about how separate from the world we should be, we also hear that we are called as disciples to be in, but not of the world. We are called by God’s Son to be witnesses of grace in our own time.
As persons who receive forgiveness and are restored in hope, this reading subsequently calls us to task. We are to do grace-filled ministry in a sinful and pain-ridden world. We are to feed, heal and comfort others, providing the good news of salvation for those that feel the pain of separation from God. We may rightfully ask in prayer that the Holy Spirit shall be poured out, just as our Lord did before the Crucifixion and Resurrection. This is needful for us to do, so that repentant people shall know a better way of being.
Therefore, as the collective Church gathered, let us together endorse and empower evangelical persons to write their faith onto the blank slate of waiting hearts and minds. We may rightfully pray that this effort would occur in a new, emerging generation. Let us aim to teach mothers, fathers, and children concerning the Holy Spirit’s work among us, so that every person shall know that they are called to join with us in this wondrous task. In the Spirit, le us pray to the Father that we may be one and we might participate faithfully alongside one another. So it was written by John.., and so may it be.

May The Peace Of God Be With You Always!