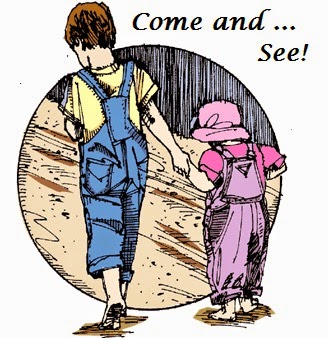 FOR THE Second Sunday after Epiphany, we find our lesson to be from the Gospel According to John. Within this text, the gospel writer relates to us the calling of our Lord's disciples. Though the scene deviated somewhat in the sequence of calling told from the synoptic writings of Mark, Matthew and Luke, we find similar emphasis about the revelation given to us for witness…

The next day Jesus decided to go to Galilee. And he found Philip and said to him, “Follow me.”
Now Philip was from Bethsaida, the city of Andrew and Peter. Philip found Nathanael, and said to him, “We have found him of whom Moses in the law and also the prophets wrote, Jesus of Nazareth, the son of Joseph.”
Nathanael said to him, “Can anything good come out of Nazareth?” Philip said to him, “Come and see.”
Jesus saw Nathanael coming to him, and said of him, “Behold, an Israelite indeed, in whom is no guile!” Nathanael said to him, “How do you know me?”
Jesus answered him, “Before Philip called you, when you were under the fig tree, I saw you.”
Nathanael answered him, “Rabbi, you are the Son of God! You are the King of Israel!”
Jesus answered him, “Because I said to you, I saw you under the fig tree, do you believe? You shall see greater things than these.” And he said to him, “Truly, truly, I say to you, you will see heaven opened, and the angels of God ascending and descending upon the Son of man.”  (John 1:43-51)

On Having No Guile…
As our gospel record recorded the calling of Andrew and Peter, stated just prior to this lesson, we find that Philip is first spoken to by Jesus in very simple terms the very next day. According to the text, Jesus addressed Philip in short terms with... “Follow me.”
In the original Greek of the day, the single word “acolouthe” (ἀκολούθει) indicates a “calling forth”. This is also the root word for the English word, “acolyte”, who was a person who originally lit the torches for the disciple’s guidance through the catacomb tunnels of ancient Rome. Thus Philip, formerly one who had followed John the Baptist and through the Spirit was sent to Jesus… quickly was given light of our Lord. After doing so, he firmly believed Jesus to be the Messiah (Deliverer) of Israel. By actively exercising this faith, that early disciple saw great deeds accomplished by God through Christ Jesus. Philip then, is yet a model for those that seek after God even in modern times.
Possibly to ground the textual characters in a very real, yet mystical event, John related exactly where Philip and Andrew were from. John wrote that they were of Bethsaida, then our author subsequently established the mystical revelation. We read in the scene and flow of history, where Nathaniel humanly scoffed that such a great event should happen in such a prophetically meager place as Nazareth. This revealed that, just as today,… the out-of-the-way place was seen as unfit for such a grand occurring. Scriptural witness did not hold the place high... because it was not mentioned in the Hebrew scriptures.

Nathaniel thus dealt lightly with the matter. He said to Philip an over-the-shoulder comment that would seemingly ward off further commentary. To be sure, many witnesses, have since encountered the same attitude in their witness. John described, however, that it was in this framework of friendship that Philip persuaded Nathaniel to join him. He did so by just using the words, “Come and see!” (Eρχου καὶ ἴδε)
Therefore, we read today that the encounter between Jesus and Nathaniel revealed much about personal evangelism methods for the modern Church. The words reveal much to us. First, we hear that Jesus knew Nathaniel before they interacted. How so we might wonder?
Was it Nathaniel's implied resistant demeanor, or some sect or status clothing which gave Jesus a hint of his Judaic genealogy? How would Jesus know either him... or us... by sight as someone he could call his own? We do not know for sure, except that Jesus proclaimed that “in him there is no guile”, as Nathaniel approached.

We are reminded thus that in faith, Philip had brought his friend… and because of that personal witness made… and Nathaniel's willingness to walk with his friend to see Jesus… that the pronouncement was made by Jesus that Nathaniel had no ulterior motive.
In genuine surprise, Nathaniel was taken aback. He was without a leg to stand on because Jesus seemed to know his character… and indeed that stated that he was willing to wrestle with God, just as his ancestor Jacob.
Then Jesus, by also telling Nathaniel that he had seen him under the fig tree, assured the doubter that as an inquirer, he represented the faithful of Israel. Israel had often been thought of as a people wrestling with the Holy Spirit in order just to eat of God’s sweet fruit.

Open Mind, Filled Heart!
Because of Jesus’ insight as described here, Nathaniel proclaimed that Jesus was surely the One his friend Philip had presented as the Messiah. He became convinced that Jesus is the Christ… the Son of Man and the Son of God. You see, Nathaniel quickly recognized that Jesus had divine insight, and was to deliver Israel from bondage.
Our author however… declared that Jesus, as the revealed Son of God… made it quickly evident to his new followers that they would see much greater revelations than those already understood by Nathaniel. Indeed, all of those who were mentioned in this reading and the text that occurred just before it… that those first disciples... named Andrew, Simon Peter, Philip and Nathaniel… would indeed see. The disciples would be made messengers of God. They would therefore see angels descending from, and ascending to… the courts of Almighty God. This recalls for us the story in Hebrew scripture wherein blessed father Jacob told attentive listeners about his dreamlike vision of the heavenly ladder.

And he dreamed that there was a ladder set up on the earth, and the top of it reached to heaven; and behold, the angels of God were ascending and descending on it!
And behold, the Lord stood above it and said, “I am the Lord, the God of Abraham your father and the God of Isaac; the land on which you lie I will give to you and to your descendants; and your descendants shall be like the dust of the earth, and you shall spread abroad to the west and to the east and to the north and to the south; and by you and your descendants shall all the families of the earth bless themselves. Behold, I am with you and will keep you wherever you go, and will bring you back to this land; for I will not leave you until I have done that of which I have spoken to you.”
Then Jacob awoke from his sleep and said, “Surely the Lord is in this place; and I did not know it.” And he was afraid, and said, “How awesome is this place! This is none other than the house of God, and this is the gate of heaven.”
(Genesis 28:10-17)

Therefore, sisters and brothers in Christ… it is with this vision and purpose that the churches of John’s day were called, and Christians for centuries afterward would follow faithfully. They would see the great workings of God in the descending and ascending. By the power of those same descending heavenly messengers, today we also see both children and adults baptized in the name of the Father, and the Son, and the Holy Spirit. We now also enjoy the great pleasure to commend our friends in Christ to both go into the world as witnesses, and into the heavenly realms after their death. We are, you see, made through our baptism to be the children of God… those who are without guile.
Stop Into Pastor's Personal Page!
Consequently, our task is great in what is now called a post-Christian world. Rest assured that we shall also witness miracles. Though we worry over declining membership, we will witness the work of the one true, apostolic Church in modern times. We shall join with our brothers Philip and Nathaniel in praising God’s love given through Christ Jesus. This is certainly so! This is our purpose… and of such shall it be even unto eternal life. Thanks be to God!
Please be invited to view this video about the text...
Come and See!