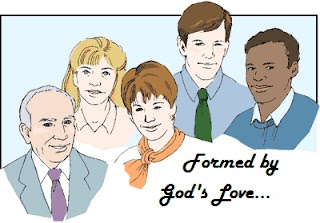 ON THE Fourth Sunday after Epiphany we hear from the Gospel According to Saint Luke. The account singularly portrays a fickle people, and warns us to remain centered in the Word rightly spoken to us.
PLEASE NOTE: An alternate reading for this Sunday exists as Luke 4:31-44... however that reading so closely aligns with the earlier written Mark 1:21 and following, if you so desire to refer to that discourse, click the call out provided here..,
Healings in Capernaum

This Lukan account, however, singularly portrays a fickle people and warns us to remain centered in the Word rightly spoken to us…
And he began to say to them, “Today this scripture has been fulfilled in your hearing.”
And all spoke well of him, and wondered at the gracious words which proceeded out of his mouth; and they said, “Is not this Joseph’s son?”
And he said to them, “Doubtless you will quote to me this proverb, ‘Physician, heal yourself; what we have heard you did at Capernaum, do here also in your own country.’”
And he said, “Truly, I say to you, no prophet is acceptable in his own country. But in truth, I tell you, there were many widows in Israel in the days of Elijah, when the heaven was shut up three years and six months, when there came a great famine over all the land; and Elijah was sent to none of them but only to Zarephath, in the land of Sidon, to a woman who was a widow. And there were many lepers in Israel in the time of the prophet Elisha; and none of them was cleansed, but only Naaman the Syrian.”
When they heard this, all in the synagogue were filled with wrath. And they rose up and put him out of the city, and led him to the brow of the hill on which their city was built, that they might throw him down headlong. But passing through the midst of them he went away. (Luke 4:21-30)

What Say You?
In our good news lesson from Saint Luke, we see that many persons within the synagogue did not accept the pronouncement from Jesus that his arrival fulfilled an ancient prophecy. Indeed, our Lord had said that the he was the Messiah… the Christ… the Deliverer. The gospel of Luke related that although the congregation initially spoke well of him, a continued reading reveals that their favorable attitude was not to last. This occurred as he was challenged that they knew him. He had grown up in that town. He then told them that a prophet was not received in his own country. We find to a  somewhat lesser degree, Mark and Matthew also had written concerning this wrathful rejection. Both of these gospels said this in a rather brief manner.
Given that Luke picked up that same tradition, we find that he also emphasized the scene that began to turn from favorable to very hostile. Only Luke, records further the "Why?" of his rejection. In reading Luke, we echo, "Why were the synagogue elders and populace so upset?" I think that the traditional hold of the leadership over the people was being challenged. This jealous foment in the synagogue brought Jesus to speak further.
We read that the first scene he lifted up came from Israel’s recorded history. The tradition was inherited from the ministry of the prophet Elijah. Our Lord pointed out that during a “dry” time, when Israel was punished by God for straying from his ways... divine grace was given by the prophet to an “outsider”. This had occurred though the children of God brought from bondage in Egypt remained oppressed.
Immediately after that abrasive reminder, Jesus also reminded concerning Namaan, a military officer from Syria. Naaman was mentioned as being favored by a healing from leprosy.
Both of these cited examples spoken by Jesus raised the growing ire of the congregation. They reacted violently. Given this, we now ask, “Why did Luke cite this scene when the other synoptic gospels did not?” The answer I consider may lay rooted in the location and time of the gospel’s writing. The scene told of was very relevant to Luke's Greek and Roman people. If we take that this was likely written in or around the city of Corinth, and was penned during the mid-to-late 8th decade of the first century… we have a historical hint. You see, that history centers us in a time period when the early Christian Church was breaking away from the synagogues throughout the Greek provinces.
At that time, many Jewish rabbinical authorities had openly persecuted the Christians. Consequently this gospel telling rightly addressed the status of those who were cast out, challenging persons concerning those unbelieving Jews in their status as the chosen people of God. This was remembered, and likely written as a warning to the Christian Jews of his day, and an affirmation to the Gentile nations.
Consider this! History has shown that some twenty years had passed since the Jews had been tromped on by the Roman authorities in Jerusalem. Afterward they had suffered defeat in the battle for the fortress at Masada. We know that continued Jewish unrest would eventually lead to yet another rebellion after the cusp of the century… one that would again result in further persecutions.
You see, in the midst of great religious turmoil, Luke demonstrated that the fault lay not with either the whim or anger of the divine, but the unbelief of the Jews in accepting Jesus as the Son of God. Thus it was that Luke accented that foreign unbelievers had received graceful faith, even from time long past. Thus his gospel pointed out that both the Greeks and Romans of the Empire had become favored by God.

What Now?
A warning therefore rings out to we of the present-day Church. We now live in a complex, modern world inhabited by persons of many faith expressions. Therefore, we may assume that since the past proves that favor for the Church rises and falls like the waves of the sea, we may also grant that this text holds both a great warning, and a bright future for us.
As we gather in our Christian pews this week, I suggest that we think thoroughly on this lesson. Consider whether our denomination clearly expresses the divinity of Jesus, the One who brought us freeing salvation? Or do we quietly sit back unconcerned while some question his divinity... even when these challengers stand in leadership or sit in the pews.
The question arises, "Do we turn the congregation into a legalistic outpost of modern cultural values... or sway to various cultic prostitutes who stray far from a right understanding of the gospel message?" In summary then, I ask you, “Do we try to drive our Resurrected Lord from our midst, or do we rather realize our sin and accept the saving grace of forgiveness given?” Be warned here! Honest answers to these questions may drive us rightfully to our knees before the cross.
If we should wonderfully find ourselves bowing sorrowfully before the Lord our God... we know that we can be uplifted in knowing that grace through Christ crucified, shall restore us again as his  people. Certainly this forgiveness is yet available to us through the power of God, as expressed mainly in our church worship through the Rite of Confession and Forgiveness, Holy Baptism and participation in the Sacrament of the Holy Eucharist. We know that through these things we are made free and empowered through that same Spirit who works grace in our lives.
Though some of us may believe that we have a personal relationship with Jesus Christ and that is enough, we often act to spurn his great work through the Church. To these, I say that we can be certain that we are free to become servants of God who work together. Together we can more powerfully and thoroughly proclaim the good news.
Visit Pastor's Blog!
Remember! By God’s grace we are given knowledge and strength to speak to our unbelieving neighbors in this world. Thus we can together pray that the Spirit will open the ears and hearts of those who find themselves as deceived through their own unbelief, religious error or spiritual laziness. Whether these to whom we speak may be found as Muslim, Hindu, Buddhist, Agnostic, or Atheist… by the power of the Father, and the Son, and the Holy Spirit they may rightly be confronted by the Word. Each can be called to decide. Will they accept or reject the Holy Spirit's driven witness about our crucified Lord... he who who died that we may live? How shall we know unless we witness to them?

Blessings to you through the Holy Spirit from God, our Father and his Son, Jesus Christ... on this day and forever more!

Please be invited to view this video, offered before God for the coming days...


May the Peace of God be with you always!