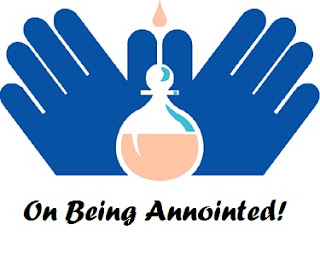 OUR LESSON for the Fourth Sunday after Pentecost comes to us from the Gospel According to Saint Luke. Herein our author described a ministry that was spontaneously offered to Jesus in love…

“One of the Pharisees asked him (Jesus) to eat with him, and he went into the Pharisee's house, and took his place at table. And behold, a woman of the city, who was a sinner, when she learned that he was at table in the Pharisee's house, brought an alabaster flask of ointment, and standing behind him at his feet, weeping, she began to wet his feet with her tears, and wiped them with the hair of her head, and kissed his feet, and anointed them with the ointment.
Now when the Pharisee who had invited him saw it, he said to himself, "If this man were a prophet, he would have known who and what sort of woman this is who is touching him, for she is a sinner." And Jesus answering said to him, "Simon, I have something to say to you." And he answered, "What is it, Teacher?"
"A certain creditor had two debtors; one owed five hundred denarii, and the other fifty. When they could not pay, he forgave them both. Now which of them will love him more?"
Simon answered, "The one, I suppose, to whom he forgave more." And he said to him, "You have judged rightly."
Then turning toward the woman he said to Simon, "Do you see this woman? I entered your house, you gave me no water for my feet, but she has wet my feet with her tears and wiped them with her hair. You gave me no kiss, but from the time I came in she has not ceased to kiss my feet. You did not anoint my head with oil, but she has anointed my feet with ointment. Therefore I tell you, her sins, which are many, are forgiven, for she loved much; but he who is forgiven little, loves little."
And he said to her, "Your sins are forgiven."
Then those who were at table with him began to say among themselves, "Who is this, who even forgives sins?"
And he said to the woman, "Your faith has saved you; go in peace."
Soon afterward he went on through cities and villages, preaching and bringing the good news of the kingdom of God. And the twelve were with him, and also some women who had been healed of evil spirits and infirmities: Mary, called Magdalene, from whom seven demons had gone out, and Joanna, the wife of Chuza, Herod's steward, and Susanna, and many others, who provided for them out of their means. (Luke 7:36-8:3)

Who Is This?
In the house of an adherent of the Law, a Pharisee named Simon, Jesus is anointed by an unknown woman of the city. Here we know only that she was classified as sinner under the Law by both the writer of Luke and the Pharisee host of Jesus.
We note that similar scenes exist in all four gospel records. In this, as recorded by Luke,  the woman is unknown; whereas, in others she is a named and known individual. If the occasion behind all of the stories is a singular event, we may suspect that the story originally comes from a pre-Markan source, which was retold and adapted by each writer for his communities. If so, surely here in the most remote in date from the original story, we find the author revealed much about the presuppositions and nuances of his own time.
In Luke, according to the narrative, Jesus relates that the “unknown” woman from the streets comes to him having many sins. I thus dabble in the thought that the unknown identity of the woman in this reading is a deliberate touch, one which seemed to push the envelope of universally-available forgiveness far beyond the Pharisaic realm. Indeed, the first noticeable character of the unknown woman is her universality from the street, and this universality works to focus the reader on the bounteous nature of God’s forgiving love.
A second factor comes as highlighted by Jesus’ questioning. Here our Lord demonstrated the disparity of human response to grace given, by comparing those who know much forgiveness, over against those who deem themselves pious enough that they only need possess forgiveness for a few “minor” infractions. This lesson thus offers a paradox for readers. If we are placed into the ancient setting of the Jewish communities within the dispersed Roman Empire, and farther… we see a sense the commendable synagogue piety, but here piety was overshadowed by good news poured out to those, including Gentiles, who had come in from streets afar. To the first class of persons, these latter were considered as untouchable unless they are of high station. To those being received, it was pure grace.
Thus in example, to this unknown woman Jesus gave forgiveness, acceptance, and love… as invitation to all those who were later considered as outsiders. Amid the unnamed, unknown, and unacceptable Gentile sinners of Luke’s day, were persons who responded to the divine call of Jesus unto repentance. Also, as warning to those who considered themselves as “chosen’… a step or two higher on the righteousness scale… a warning lay hidden in the story’s unfolding. Jesus said directly to the woman, “Your sins are forgiven.” We notice rightly that the absolution went to no one else in the house, and we read further of the surprise and discussion of those “chosen” who then sat offended by the declaration. Some in our own day are yet offended.

Of Low and High!
Interestingly, Luke tendered that afterward Jesus continued on his way preaching the welcome good news of repentance and forgiveness. Also, in the subsequent description of the group… the name-dropping writer notably included the apostles and the names of Mary Magdalene, Joanna, and others. Many historical traditions thus surmise that the woman who anointed our Lord’s feet was indeed Mary Magdalene, but in my view that is surely historical conjecture. The presupposition falsely portrays Mary Magdalene, and we lose the importance of the woman’s unknown identity, whether she was Jewish or Gentile, a huckster of fruit or foil, rich or poor.
More so, hiding slightly aside in the telling, almost latently resting within the descriptive narrative, is the name of “Chuza”. The woman was reportedly the wife of Herod’s steward. About her, I say to you… “Read between the lines people!” Through her did not the text thus subtly reveal the universal availability of salvation? Indeed, this was an available salvation that included not only those disciples who were warmed by outsiders in the shadowy fires of a temple courtyard, but also was grace offered through this characterization. This was a woman who was the wife of one who served and was associated with high, influential persons, and walked among hostile political courtyards. Consequently we today find that not only does the unknown, sinful woman anoint the feet of our Savior, but those knowing the very halls of the elite were welcomed by our Lord. They were also called serve our Lord’s mission. Thus within the listing of this name we find a mirror held high before us. We thus may see a Holy Spirit-borne reflection of ourselves as sinful servants, whether male or female, young or old, or working fervently in high or low societal station. Gathered together as sinful before the font of the Holy, we who walk together in faith in the church of Christ were brought full circle, to become anointed in baptism and fed at the Holy Eucharist. We are subsequently called to be collectively providing the gospel message out of whatever station or means through which we individually work. We are prompted by this gospel message as the church of Jesus Christ, to become a people going forth cooperatively to do ministry in what is often a divided, sinful and hostile world. By the power of the Holy Spirit, it is our anointed privilege so to do. So it is written, and so it shall be.