A Stone Rolled Away! 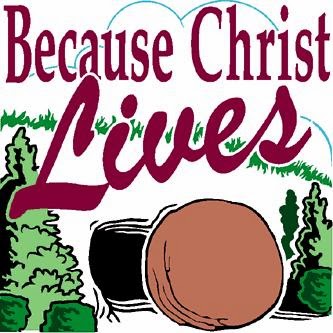 OUR READING for Easter arrived as stated in the Gospel According to Saint Matthew, to a community that was striving within its usual traditions. But, as we read we see after Easter the usual had been rolled aside. The lesson depicts the tremendous earth shaking good news that rolled forth. Words of a divine messenger had been heard. The world could never be the same. These words are revelation even now to us, and press us into the act of repeating them…

Now after the sabbath, toward the dawn of the first day of the week, Mary Magdalene and the other Mary went to see the tomb.  And behold, there was a great earthquake; for an angel of the Lord descended from heaven and came and rolled back the stone, and sat upon it. His appearance was like lightning, and his raiment white as snow. And for fear of him the guards trembled and became like dead men.
But the angel said to the women, "Do not be afraid; for I know that you seek Jesus who was crucified. He is not here; for he has risen, as he said. Come, see the place where he lay. Then go quickly and tell his disciples that he has risen from the dead, and behold, he is going before you to Galilee; there you will see him. Lo, I have told you."
So they departed quickly from the tomb with fear and great joy, and ran to tell his disciples. And behold, Jesus met them and said, "Hail!" And they came up and took hold of his feet and worshiped him. Then Jesus said to them, "Do not be afraid; go and tell my brethren to go to Galilee, and there they will see me."

Of Angels and Empty Tombs…
Amid the dark times for the disciples after the crucifixion of Jesus, on that Sunday morning occurring after the Hebrew Sabbath had ended, the women who had followed Jesus during his ministry… walked toward his tomb. We can safely assume it was not a joyful journey. They knew only of doing the business of burial as usual. You see, in the rapid storm of the crucifixion proper respectful grief for the death of Jesus had not been expressed. They were in thus walking in the dark, bent on accomplishing that which was expected.., that which was religious. The grave site as they arrived, however, was not found as expected. Indeed, the place to which they arrived was to be brought far from the death-laden remorse expected. It was to become alive and thunderous!
The scene they saw became unsettling as they came upon the grave. As witnessed in Matthew, a thunderous earthquake first shook the place. The tomb was opened by an angel. It opened not apparently to allow Jesus to exit, but to rather reveal to them that the grave could not hold him. They were to clearly see the “Vacancy” sign!.
Like the “young man in white” as described in the earlier written Markan gospel, the angel was clothed like one in lightning…in startling brilliance. But unlike other gospel records, he sat alone upon the rock. He shockingly appeared before them, sent from heaven to say that the tomb was empty.
The angelic messenger thus appeared to them in brightest drama. The revelation he made was such that the brightest light previously known could not describe it. God’s whole point about the divine power over death was being made to the witnesses. It was revealed that death does not have eternal hold. The angel, therefore, came as someone whose task was to tell of this great importance. His powerful presence made even the guards reel back in fear. The women were very afraid. They all, both women and guards may have cowered, wondering greatly from their hiding places. The soldiers were taken aback, frightened. Some of them, likely dropping useless weapons, ran to tell the religious authorities. The tomb was indeed empty. As servants of the worldly they could not comprehend the reason.
But the angel’s words to the women then gently prepared them for the revelation with, “Do not be afraid…” Beginning with this wondrous and comforting phrase, the messenger told them the good news and showed the open tomb as proof positive for those who would believe. Jesus was not there. The messenger of God told them exclusively… “for he is risen, just as he said.”
The messenger then instructed the women to go and deliver that same good news to the other followers of Jesus. And as the witnesses went joyfully to tell the good news, they were strengthened in their purpose by the Lord himself. The Risen Lord met them, and commanded them to spread the gospel and go into Galilee. This last instruction was also meant to be heard in Matthew’s church as it gathered for the Passover message some fifty years later. Christ was risen, and this is most certainly the message expressed to the Christian churches in our own day.

Go into Galilee!
You see, what Matthew related to the people of Antioch in Syria, and through the power of the angels to us today as well… is that we are all called to go to Galilee. He promised the women and those who followed their footsteps… that we shall see him there. But I offer that we are to know in scripture that we are called to go not to just a physical lake, a city or a country village. We are not just to go to the seaside and stay there. We are not simply to rest in comfort in a small, quiet mountainside village. We are instructed to go to a region… the wondrous, watery region of Galilee!
Go quickly they were told. Yes, for those first witnesses…, it was good to be there. It was worth a try to capture the moment. It was a good and desirous try for them to anchor the Risen Christ of God by holding to his feet. But Jesus would have his followers know that the servants of God have other work appointed. They, and we, are called to the public witness of God’s love expressed. This must be so for an outgrowth of communion with God. Galilee then becomes for us an existence far more than a confining earthly place. Galilee becomes for us a greater nation dispersed. It is a nation mired in sin, waiting for the Light which casts out darkness!
Thus from the church of Matthew, I believe we hear a life saving message. We become a community that was, and yet is… brought into existence by the blessed waters of Holy Baptism to become apostolic. We are symbolized to be a people whose sin is drowned by the whole of the scriptural Galilean sea. You see, within the waters of baptism we are forgiven our sins though the power of the Holy Spirit. This is saving Spirit of the loving Father and his obedient Son, Jesus Christ.  We are thus empowered of Galilee! We are freed by baptism.
In baptism God comes to us. We are joined with him! We share his life, death and Resurrection, and therefore share his purpose. Therefore, know this!  I thoroughly believe that Galilee represents the whole, baptized church. We are thus by water and the Word made his own. We become sent ones like our Lord Jesus was the Sent One. Therefore, we being beloved disciples of Jesus, shall witness in Galilee… in war-torn Syria, Europe, Asia, or the Americas. We are exhorted out of the darkness both by the bright angel disclosing Truth at the tomb, and our Lord Christ on the road. In the face of darkness and confusion we are called to cling to baptismal power given. We are called to witness of God’s love.
Let us remember! The Law given to Moses had formerly condemned us as sinners to a tomb. But the tomb of death has been opened for us. Though the Law yet exists and we die, through Christ it does hold us in death. By grace of God the stone is rolled aside. The power of the Spirit reveals the Resurrection strength of God.
The Law and its weighty traditions only serve to drive us out of darkness toward Christ, and these burdens of the Law today even yet drive others to seek Christ. Thus to offer us escape the penalty of the Law, the good news told to Matthew’s church reminds us of the promise made and fulfilled by Jesus. It is a promise that as we yet travel into the future to spread the good news revealed by the angel of God, we shall meet Jesus on the road.
We are to understand that Jesus, as the Resurrected Son of God, is the Way, the Truth and the Life. Therefore, the message of blessed Matthew comes to us in this Easter season, just as it did to the women at the tomb. The Word comes as a Light shining for us in the darkness of a modern world. The Light shines truly to reveal the empty tomb and Jesus tells us at the last… to go ahead of him into Galilee. He then comforts us along our path with his Word..., “Lo I am with you always, even to the close of the age.” (Matthew 28:20)