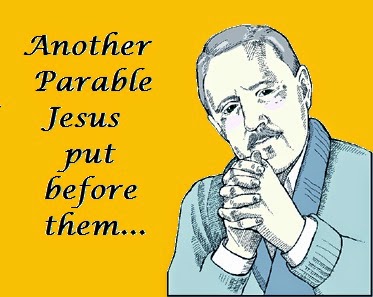 THE EIGHTH Sunday after Pentecost brings us along a path made from a constructed collection of our Lord’s parables. Judiciously arranging the order of conversation given in biblical script, the Holy Spirit thus provided us with rapid, lively character. Our Lord had progressively illustrated the dramatic growth and value that belongs to the kingdom of heaven...

Another parable he (Jesus) put before them, saying, “The kingdom of heaven is like a grain of mustard seed which a man took and sowed in his field; it is the smallest of all seeds, but when it has grown it is the greatest of shrubs and becomes a tree, so that the birds of the air come and make nests in its branches.”

They said to him, “Yes.” And he said to them, “Therefore every scribe who has been trained for the kingdom of heaven is like a householder who brings out of his treasure what is new and what is old.”
(Matthew 13:31-33, 44-52)

Anticipated Sorting!
In literary flow, I believe modern worship planners have designed a wonderful two-step dance in moving us from last week’s Matthean text... toward today's text. Combining last week’s lesson and this, we receive interwoven parables from the Matthean scribe. These progressively tell those gathered a wonderful teaching about the unfolding revelation of our Lord. I note with pastoral chagrin, however, that anyone missing attendance at either worship experience loses a great deal in the continuity of the text.
The parables we study here begin by relating to us the lesson of the “The Mustard Seed”. This text has a distinct historical source for us when compared with that which immediately follows. It is found chronologically in all three of the synoptic gospels of Mark (c. 65-70 AD), and Luke (c. 80-85 AD) and Matthew (c. 80-85 AD). Being found in the earliest Markan gospel, therefore, we see the first teaching likely had root in a tradition that came from an earlier time. From the prophet Daniel we read…

"The visions of my head as I lay in bed were these: I saw, and behold, a tree in the midst of the earth; and its height was great. The tree grew and became strong, and its top reached to heaven, and it was visible to the end of the whole earth. Its leaves were fair and its fruit abundant, and in it was food for all. The beasts of the field found shade under it, and the birds of the air dwelt in its branches, and all flesh was fed from it." (Daniel 4:10-12)

Subsequently, we see that this first parable began as Jesus taught the disciples using earlier scriptural tradition as his resource. However, the parables that followed this first illustration in the reading are a bit different. These include those which Jesus also told, but they were supplied to us today only by the church of Matthew. Therefore, we as the Church now rightly receive these readings just as our ancient Matthean forebears.
The method sets the particular tone for us. This selective editing tactic is one that we often use in our lectionary today! To provide weekly lessons, we sometimes skip over less relevant verses from a gospel author...  to concentrate and, possibly combine certain interwoven texts. We see that certainly, our Matthean predecessor historically did this for us... as Jesus’ teachings here come from various sources collectively compiled to emphasize certain aspects of our Lord’s voicing.
The Matthean theme was mainly of inherent growth for the kingdom, as first illustrated from Mark. This is firmly reinforced by the second illustration found to be from the “Q” source. The second parable of the woman's leaven, as given by Jesus... was used in this gospel to doubly emphasize the first theme. The latter illustration, coming out from the independent "Q" source that has now been reconstructed by modern scholarship, clearly shows us that the second parable added, reinforced the former. Our Lord... and Matthew.... through the the guidance of the Holy Spirit, clearly followed a "Tell them once, tell 'em twice... and tell 'em again" teaching style!
Further, we note that a progressive difference exists in the level of revelation. In Matthew, that which was heretofore hidden in Mark was revealed by a “supernatural” power, such as the woman's leavening... a working marvel beyond knowing. This progression is seen presented more firmly in Matthew as the next parable highlighted the surprise and value caused when the person in the parable apprehended true gems of the kingdom.
The growth theme found initially in the first parable's Markan field, therefore... was progressively followed by the miraculous leavening and the pearl of “great price”. The emphasis of the more highly valued illustrated the unexpected, undeserved grace and mysterious value of God’s supernatural kingdom.
Here we must remind that these important latter verses are without parallel in the other gospels. Consequently we find that in Matthew, through the Holy Spirit... God led both the early church in Antioch and we ourselves toward a final message.

Conclusion and Testing!
The final point is revealed in the sorting of the netted fish. In placing this parable as such, our Matthean scribe clearly told his readers that even though hidden like fish in murky water... eventually all shall be gathered. The lesson given last week, reminds us that even unto this present day, we as forgiven sinners shall co-exist with unbelievers into the latter age. We read in this climactic illustration then, that Jesus related to the disciples once again about the final, apocalyptic workings of the kingdom.
Visit Pastor's Personal Videos

Do You Understand?
Notice that the last verses as told by Matthew, used symbols from the fishing lifestyle. The images, mirror those of the agricultural scene previously revealed... about the wheat and the weeds. Indeed we find that Matthew, by the wisdom of the Holy Spirit, provided a rapid succession of teachings which had been earlier given... keeping with the teach'em and teach'em again method! Therefore we see that the later first century disciples in Matthew's community were given these lessons progressively, the first being agricultural and the second seafaring, so the gospel reading built up their knowledge.
The teaching ended appropriately with showing our Teacher testing his immediate followers, and the Church which followed him at the time...  was asked a very important question… “Have you understood all this?”
We also need to answer that question! The text related that the disciples answered very quickly in the affirmative… possibly too quickly.
We might wonder at this! First, consider that we know the chasm between the Infinite and our finite human knowledge cannot be crossed by human thought or effort. Therefore, the meanings for Jesus' first listeners were shrouded by human sin, and thus the meanings could only be truly revealed to them by the power of the Holy Spirit. At the time of first telling then, many followers who originally listened to Jesus' parables, like Peter who very likely passed these parables on to the Matthean church, would not completely understand them until after the Teacher would die for them and be Resurrected.

Old and New!
In the last sentence of our reading for today, we see that Jesus taught them using sound parabolic method. This method as shown by Matthew’s writing, was that our Lord instructed his disciples to take what is found as reliable and true from the old established tradition, and mix it rightly with the good news.
Consequently, using these wondrous guidelines today, we of the Church may thus preach both biblical Law and the Gospel to both sinners and saints. Unlike those first, finite disciples who were described as prior to the crucifixion and Resurrection... who lacked somewhat the full guidance of the Holy Spirit, we are privileged in like manner to Matthew's church. We are sinners who are also made saints. We now have access to scripture, rightly interpreted. Because of that powerful, spiritual presence in the early church of Matthew... and that which is also present in the Church today… we can bring forth an abundance of previously scriptural hiddenness to the world around us. We are able in prayer to draw correct, yet numerous applied meanings from these wondrous parables.
What is more... we can prayerfully attempt before God to not add any human agenda! We are indeed blessed. We are like a man who when finding a treasure in a field, leaves that field rejoicing. May we leave worship clinging to the Holy Spirit’s guidance as we live in the sin-filled world... and move toward the “close of the age.”
Please be invited to watch a video message based upon this text...
May the Peace of God Be With You Always!