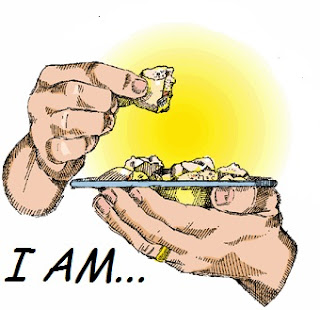 FOR THE Tenth Sunday after Pentecost we hear from the Gospel According to Saint John. In this reading we find that Jesus, after the two-fold miracles of feeding 5000 people and walking across the inland sea of Galilee, is approached by a crowd that wishes also to be fed, or be fed again. We need to consider their motivations as we read…

So when the people saw that Jesus was not there, nor his disciples, they themselves got into the boats and went to Capernaum, seeking Jesus. When they found him on the other side of the sea, they said to him, “Rabbi, when did you come here?”
Jesus answered them, “Truly, truly, I say to you, you seek me, not because you saw signs, but because you ate your fill of the loaves. Do not labor for the food which perishes, but for the food which endures unto eternal life, which the Son of man will give to you; for on him has God the Father set his seal.”
Then they said to him, “What must we do, to be doing the works of God?” Jesus answered them, “This is the work of God, that you believe in him whom he has sent.”
So they said to him, “Then what sign do you do, that we may see, and believe you? What work do you perform? Our fathers ate the manna in the wilderness; as it is written, ‘He gave them bread from heaven to eat.’”
Jesus then said to them, “Truly, truly, I say to you, it was not Moses who gave you the bread from heaven; my Father gives you the true bread from heaven. For the bread of God is that which comes down from heaven, and gives life to the world.”
They said to him, “Lord, give us this bread always.”
Jesus said to them, “I am the bread of life; he who comes to me shall not hunger, and he who believes in me shall never thirst. (John 6:24-35)

Of Hunger…
As evidenced by this text, Jesus was approached by many persons after he went about doing healing work in and around Capernaum. Some wanted just to be fed bread by him as a continued sign, like welfare recipients who are infantile and do not wish to grow. Others came wishing to be fed, but were willing to work for whatever would be given. In either case, Jesus sensed their hunger as being centered about only their bodily needs. Both groups indeed exhibited an ongoing materialistic hunger, one that the kingdoms of this world did not fill. They did not realize, however, the availability of a greater providence. Consequently, rather than again merely providing bread for those gathering, our Lord spoke to them of his filling that greater need.

Here we must take note that we need be careful with this emphasis. The text does not negate the mortal hunger pains of the poor who go without food, some to the point of starvation and death… but Jesus clearly pointed us toward the filling of a greater eternal hunger. Jesus called attention from our basic human quest for food, often made harder for the poor by sin... and rather futile by human greed… and went further to highlight the gift of everlasting sustenance. To grasp this message more easily, I contend that we must examine the context for the writer of this gospel. It is important to grasp that we read here a gospel message written by blessed John. Our author likely penned this literary work over several decades in its entirety. If we therefore follow his historical arrangement of the lesson within the surrounding material, we of the Church can find a familiar pattern. A flow emerges and holds true for the Church even in our modern times. 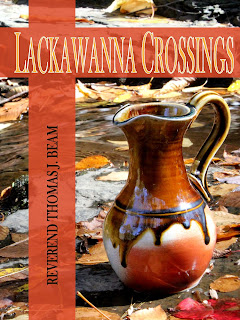 Check Out Our Book About Pioneering Faith

Elemental Economics
You see, within the several historical decades believed to be in this gospel’s writing, we find that this text was likely first laid down while the early Christians were simply members of a faction growing within the Jewish synagogues. Therefore given the flow of the text, they may be likened to those who were the first 5000 fed upon the hillside… some who spiritually believed in the Word of God. They were gathered amongst the descendants of those who had been fed with only two fish and five loaves. They knew of their being filled miraculously! Others however, did not believe in Jesus as the Christ, but were still fed in their “going-along-with-ness”. Still others sought to follow Jesus for personal gain, attaching themselves to the growing cult. These last were simply users trying to build or sustain their own personal cupboards.
In the very next setting of the gospel, however, we see the emergence of the early Church was represented in the disciples as they were “crossing of the sea”. Almost passed by, they eventually emerged safely from the water. Thus the scene portrays the virtue of Christian baptism as accomplished by the power of the Holy Spirit.
This I offer was likely why John immediately followed the feeding story with the sign of Jesus walking on the water. If my assessment is correct, the result historically flows well as the narrative continues that many in and surrounding Capernaum were healed. Note the emphasis of baptismal washing, healing and feeding.
However, the danger expressed by Jesus at that time was that some followed because of selfish sinfulness. These were not accepting his spiritual message. Being steeped in the ways of the sinful world, they felt that the benefits of feeding upon bread from Jesus was an end result that they could do for themselves. In that way, you see, continued participation would satisfy their needs and wants. They could independently claim earning of those filling benefits by their following. Thus they corporately wished to turn God’s gift of salvation into a worldly worker’s negotiation.
Whether they sought food or water in either a materialist or spiritual sense, we then might ask an important question. “Do we think the sinful arrogantly would say that they deserved credit because of their works in successful pursuit?” I fear that there would be, and often is now… just this argument made. Indeed, consider that the Church has often erred in saying, “We have baked the bread for communion, and we've poured the water for baptism in the font of our spotless church. We have built this sepulcher as a monument... so thus we often claim credit for our work!” Indeed, you see… there is no end to our vanities.

On Being Filled…
Consequently, Jesus turned the focus of those who approached him on that day. By doing so, he speaks yet to us through John to address our own self-centeredness. Our Lord spoke concerning all sustenance given by God, whether it be worldly or eternal. Central to the message remained that God provides both material “bread” as sustenance, and spiritual Bread. Both comes to us as given from the Father. This truth follows the pattern of the Jewish ancestors of the synagogue. We note that Jesus referred his listeners to the miracle of daily bread (manna) supplied in the wilderness; bread that was given to the wandering Israelites (see Exodus 16 and Numbers 11). Therefore our Lord encouraged through John, his early Church which found itself wandering in the wilderness of a sinful world. The Bread of Life shall eternally sustain them is the emphasis that I believe John was presenting!
As our Lord described… earthly, worldly bread provided to the Church either then or now, may also be made spiritual bread for us. This is uniquely the work of God and is not due to our works. Further, Jesus stated the rather startling good news that he alone is the True Bread from heaven. Consequently out of this grows the theology that we use to describe the Holy Eucharist, as our communion (gathering) meal.

Read Our Commentary On "Evolution vs Creation"

You see, it becomes clear that John wrote to the early Church telling them about the apostles who had crossed the turbulent sea, and thus pointed to our blessed receiving of the waters of Holy Baptism. Our author then revealed the Son of God… who is God himself… as the One who comes to us in the Sacrament of the Holy Meal… in, with and under the natural element of worldly bread. Thus the meal that we are given becomes not just worldly bread, but more so the eternal “Bread of Life”. Indeed Jesus himself, who is the Christ, was he who spoke to the people gathered… who explained to his Church clearly concerning his identity.
Some may ask, "How so do we know this?"
Let's look at the text closely. The writer clearly said that Jesus used a divine statement beginning with “I am...” (In the Greek - ego ami). Jesus described himself therefore with a statement that began in the same manner as the divine name. This name is so holy that it is yet unspoken by many devout Jews. Recall in scripture that the revealed name of God as “YHWH” is the name that we translate into English as “I AM THAT I AM” (Exodus 3:14).

I repeat, Jesus said boldly… “I AM the bread of life; he who comes to me shall not hunger, and he who believes in me shall never thirst.”

Therefore we are called to believe that Jesus is the Son of God, and is God. We hold closely to this faith graciously given to us by the Holy Spirit through the waters of Baptism, for it is strengthened by the spiritual food of confession, forgiveness and thanksgiving provided of the Holy Spirit in communion. We thus are so called to be eternally and wonderfully filled. So it was in John’s day, is yet, and shall ever be. Thanks be to God.
If so prompted by the Holy Spirit, view this recent video...


May You Be Brought To Safe Harbor!