On Being Made Able... 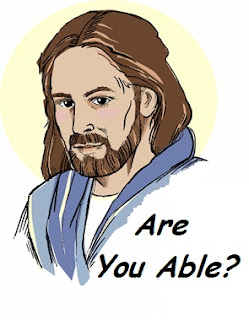 FOR OUR STUDY on the Twenty-First Sunday after Pentecost, many congregations focus on yet another reading in the Gospel According to Mark. We find in our text that after Jesus had prophetically related for the third time that he was going to Jerusalem to be killed, the disciples were still focused on his being politically “lifted up”. They expected him to be ruler over Israel. Thus some followers yet maneuvered for advantage.

And James and John, the sons of Zebedee, came forward to him, and said to him, “Teacher, we want you to do for us whatever we ask of you.”
And he said to them, “What do you want me to do for you?”
And they said to him, “Grant us to sit, one at your right hand and one at your left, in your glory.”
But Jesus said to them, “You do not know what you are asking. Are you able to drink the cup that I drink, or to be baptized with the baptism with which I am baptized?”
And they said to him, “We are able.”
And Jesus said to them, “The cup that I drink you will drink; and with the baptism with which I am baptized, you will be baptized; but to sit at my right hand or at my left is not mine to grant, but it is for those for whom it has been prepared.”
And when the ten heard it, they began to be indignant at James and John. And Jesus called them to him and said to them, “You know that those who are supposed to rule over the Gentiles lord it over them, and their great men exercise authority over them. But it shall not be so among you; but whoever would be great among you must be your servant, and whoever would be first among you must be slave of all. For the Son of man also came not to be served but to serve, and to give his life as a ransom for many.” (Mark 10:35-45)

Confused Glory!
Our author related again to the early Church that as sinful persons before the judgment of God, even as followers we continually and stubbornly live in a state of self-delusion. If left to our own devices we scheme and refuse to identify with our Lord’s concept of glory. To correct this error, we need only turn to the episode offered in the gospel lesson for this week.
Within the text, we find that Jesus’ cousins disregarded our Lord’s third prediction, and maneuvered to gain priority to future high ranking in the kingdom. The foolish quest of James and John to be positioned on the right and the left as advisers in the coming kingdom, we thus see them as couched in self-seeking ambition. This is first attested to by this text, in that the remaining disciples objected to the blatant approach. However, the protest of the other ten disciples was likely made out of their own jealousies, arguing about the two men who were using their familial position as a springboard to high office.
That the early Church also later believed the request to be unseemly is clearly evidenced when we compare gospel texts. Likely written some fifteen years later than Mark, the gospel witness of Matthew deflected the blame for the two men’s foolishness, by including the character of Salome in the telling. Salome was the mother of the two men. In Matthew 20:20-28, we read that Salome, being rather a motherly power broker… is described as asking the question concerning political hierarchy. Thus the church of Matthew seemed to soften the ambitions of the two men… who were by then recognized as apostles and highly regarded as martyrs. Similarly, in later discourse we also see that the Lukan gospel side-stepped the whole issue entirely by omitting the scene in its telling of the gospel message.
We clearly see that our Lord did not rebuke his cousins, but asked whether they were willing to do what was necessary to obtain the privileges. He queried whether the two men were able to drink of his cup.
We note that by recalling this for us, Mark may have been tapping the memories of the learned within in his own congregation… reminding them of the bitter cup of Socrates as he drank hemlock. The writer also recalled the graceful Eucharistic cup wherein Jesus had said, “This is the new covenant in my blood, shed for you and for all people for the forgiveness of sin.”
Jesus asked if they were willing to suffer death by drowning in baptism. Here we clearly see that Jesus used the word, “baptism” as describing an “immersion unto death”. The two men rashly said that they were able. Most authorities agree that this was a statement of foolish bravado. I tend to agree. Because of their response Jesus informed them that they would indeed share the cup and baptisms, but the positions were not his to award. The stations they asked for had been laid aside by God. I dare offer that the scene portrayed here by our Lord could be that of his crucifixion for therein two other guilty persons were crucified alongside his own innocence.

Turned Upside Down…
Consequently, the unfolding we read here, culminates with our Lord stating clearly that life in the kingdom turns the world’s value system on its head. For his followers are those who wish to be lifted to glory as his disciples, and thus receive baptism and the lowliness of servitude. The servitude prescribed, however, take us to the extreme by our Lord’s use of the word “ransom”. Even as defined in modern terms, to pay ransom carries the connotations of kidnapping. However, here it means the willing substitution of due payment for sin by the child of God. The term forms for us the theology of vicarious atonement… that Jesus made payment for us. He took our punishment upon himself! Convicted of death for our transgressions, Jesus made payment to God for our salvation.
We must note that God had planned this course of action from the beginning. We thus are made at peace with God not by our own deeds, but by the willing acceptance of the providential death on the cross by Jesus Christ. All we need to do is accept the gracious, free substitution… rather than scheming to climb the ladder for worldly position in either Church or state.
Once we have accepted the gift, we then are called to live as persons who are empowered within the community of the Church. We accept this baptismal grace in that we endure eternal life through the Holy Spirit. We are immersed by the Holy Spirit into a symbol that participates in the reality that it represents. Through experiencing our watery baptismal death, we as a sinful person experience spiritual death and are lifted up truly alive in the world by God as the redeemed… those living as a saved people. In reality, we ourselves experience the Resurrection! We become participating citizens in the kingdom of heaven.
Click Here To Visit Pastor Tom's WebSite!
Jesus taught back then... and yet teaches us now through the power of the Holy Spirit. He taught that we are called to also work as a ransom. The Spirit comes to us in Holy Baptism and today continues to mold us so that we may walk forward in the world through Christ Jesus our Lord. The one holy and apostolic Church is therefore called to spend ourselves… to serve, and not to be served. We are to give of our lives in ransom fashion for the salvation of others! We thus dare proclaim the gospel in a hateful world. We as modern disciples are made the Church through baptism. We are freed to joyfully answer this graceful commission. Thanks be to God! It is just and right so to do.

For your thoughts and prayers...

May God bless your going out and coming in from this time forth, forevermore!