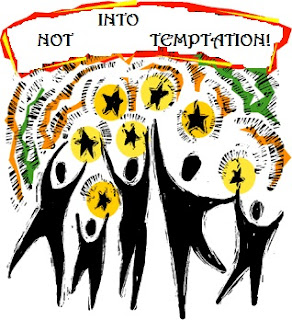 THE READING for the First Sunday in Lent comes to us from the Gospel According to Saint Luke. The text tells about the Lord warding off the temptations presented to him by devilish powers in this world.…

And Jesus, full of the Holy Spirit, returned from the Jordan, and was led by the Spirit for forty days in the wilderness, tempted by the devil. And he ate nothing in those days; and when they were ended, he was hungry.
The devil said to him, "If you are the Son of God, command this stone to become bread."
And Jesus answered him, "It is written, 'Man shall not live by bread alone.'"
And the devil took him up, and showed him all the kingdoms of the world in a moment of time, and said to him, "To you I will give all this authority and their glory; for it has been delivered to me, and I give it to whom I will. If you, then, will worship me, it shall all be yours."
And Jesus answered him, "It is written, 'You shall worship the Lord your God, and him only shall you serve.'"
And he took him to Jerusalem, and set him on the pinnacle of the temple, and said to him, "If you are the Son of God, throw yourself down from here; for it is written, 'He will give his angels charge of you, to guard you,' and 'On their hands they will bear you up, lest you strike your foot against a stone.'"
And Jesus answered him, "It is said, 'You shall not tempt the Lord your God.'"
And when the devil had ended every temptation, he departed from him until an opportune time.  (Luke 4:1-13)

Challenges of Temptation!
Jesus left the site of his baptism in the Jordan River where the Father had made a resounding declaration that he is the Only Begotten Son, and went into the Jordanian wilderness. There, immersed in prayer, he wanted to accomplish a forty-day fast. He prayed fervently to the Father for guidance and considered his future ministry. I believe that it was during this time that Jerusalem became the focal point of his earthly ministry. During those forty days in the wilderness, however, he was accosted by the devil. Three challenges were issued by the evil one.
The adversary first tried to get Jesus to demonstrate his divine power and feed himself. Though certainly hungry from his fast, Jesus tossed aside this challenge. He did as we all should when tempted. Jesus quoted scripture to silence evil. At this time, we might wonder now if these were simply evil thoughts that rolled around in Jesus’ mind. as the result of hunger delirium… or the actual personification of evil presented himself. In either case, Satan strongly had suggested that the begotten Son of God, our Lord Jesus... should abuse the power given to him by the Father.
The next diabolic suggestion presented to Jesus was a vision of the kingdoms of the world. Satan tried to give Jesus majesty over that which was… and yet is… fallen from grace. As recorded in the Book of Job, the demonic has been given dominion there.
Jesus again used scripture to counter this suggestion. I believe that our Lord’s answer demonstrated to us most certainly that the world really doesn’t belong to the evil one. Satan may only exercise power as God permits.
Finally, the gathered satanic power challenged Jesus as to the rule over all of the religious realm in Jerusalem. Yes, it does seem that the demonic can often guess the plans of the Righteous. Jesus again used his vast knowledge of scripture to still the voice of temptation.
Then, defeated at least for that occasion, the evil one departed. Consequently, Jesus began his ministry after that wilderness encounter. Spelled out in Luke, therefore, the writer’s writing depicted prophetic time in the earthly life of our Lord.

Questions Anyone?
First, to examine the text clearly and in depth, we prayerfully consider that since only Jesus and the devil were present in the related account, we assume that no other human beings were present. If so, we must conclude that Jesus later told the disciples of the encounter. Otherwise the story would not be known. Now, please know that I raise this missing eyewitness issue, not to dismiss this scene... but to show that Jesus must have used this as a teaching story. The scene instructed what the apostles and others must do to ward off diabolical thoughts. In other words, our Lord taught them… “When pressed by the devil.., rightly pay attention to what scripture says!”
Second, as recorded by Luke… this scene wasn’t written in its fullest form until late in the first century (c.85AD). It was written also with great similarity in Matthew 4:1-11. However, we must take note that only a few sentences of this text occurred in the earlier written predecessor gospel. Just a bare mention of the occasion appears in Mark 1:12-13 (claimed to be written about c. 65-70AD).
Consequently, we might wonder why the more fully developed story appeared later. Did an apostle pass the story along to the communities of Matthew and Luke, as expanded from the community which developed the Gospel of Mark? Very possible! However, I offer you another thought.... that Mark wrote a condensed version even though the longer account was known.
As biblical students we must consider that the community of Mark inherited much of the gospel message given from Paul, Peter, and Mark. In this group, Paul was first in ministry to the Gentile world. As we know from Acts of the Apostles, early on he was knocked from his horse by Jesus on the road to Damascus in Syria. That event likely occurred within the late 30s era. Subsequently, he holed up in Tarsus for several years.
During his time in Syria he was likely taught in Damascus by Ananias, and was secondarily taught at greater length about Jesus by someone who had been very close to the history of Jesus’ ministry. My research points me toward Peter or Barnabas as the likely source. Given this, might it not be possible that the full Temptation story was learned from these men, while in Tarsus, and then distributed very widely by Paul? Thus we could offer that it was relayed eventually to such as the churches of Matthew and Luke, and later confirmed by Peter.

When we consider this developed story found in Luke, we see elements that were reflected also in Paul’s travels. First, I offer that Paul’s churches responded to a famine in Jerusalem, hence the hunger of Jesus may have preached very well there. Paul also pressed on in his ministry, unto many kingdoms of the known world, where his message took hold. He likely also then felt the pull of the second temptation put before our Lord. And lastly, he had thrown over a very promising career as a blasphemy hunter of Christians when he originally departed from service to the Jerusalem temple power structure. Thus it is conclusive that I say the telling of this Temptation story rightly also describes Paul’s personal history and experience. Being as such, it also then applies to us as disciples!
Finally, the forty-day Temptation scene also related very well to the Jewish synagogues and the infant breakaway Christian house-church communities through which Paul traveled and ministered. They would have hearkened particularly well to the story, having much previous knowledge of the wilderness wanderings of the Jewish people out of Egypt. The history, and the issues of hunger, new land acquisition, and Jerusalem temple construction had been part of their collective story…. in other words… they would relate!
I offer that the longer version of this story is thus the original, which was distributed during Paul’s ministry. The absence of details in this story as found in Mark simply may have just been a matter of textual limitations. Though the account was apparently first related in Rome at length, the earliest known copies of Mark have been found in Alexandria, Egypt. It may be that Mark was originally written there on much shorter, very expensive papyrus… difficult to obtain. Thus Mark is shorter than the later-dated gospel accounts.

It may be possible that though the story was told in its entirety and well known in Rome some 30-35 years after the Ascension of our Lord, when scribal preferences were prayed over and costs considered years before in Alexandria.., the scriptural story was pared down. The edited story was thus related in digest fashion having only two sentences, because it was only incidental to Marks’ gospel writing intentions.
As well, the absence of the expanded story in Mark may simply note that the infant community in Alexandria may not have been dealing severely with satanic assault in 65-70 A.D. Possible the larger, and later, more developed communities were under full attack from Jewish and Roman authorities at the time their gospels were written. Therefore those congregations needed to provide a firmer, expanded example of how Jesus dealt with evil. The full text of the story clearly reflects this. Consequently, as great persecutions of the church grew… this more expanded account found its way into greater importance.
I believe that this gospel story in Luke is rooted in the one originally told by Jesus to the disciples. The relating of it was then carried into the world by apostles and disciples. The story comes to us and guides us through hard spiritual times. We are taught by our Lord to hang on tightly to right interpretation of the Holy Scripture. Remember! It is the Word of God that helps us resist temptations from the faint powers of apostate religious or governmental authorities. As these try to wrestle the kingdom from our Resurrected Lord, hear me clearly in these latter times as I say that the Word of God tells us rightly... whether in full or condensed version… it’s not going to happen. Satan has already been defeated.

Please Be Invited To View...


May the glaring dusts of time, pave your Way to God's eternal kingdom!