Of Tombs Made Open... 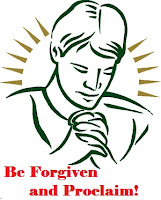 OUR BIBLE lesson for the Third Sunday of Lent comes to us from the Gospel According to Saint Luke. Presented is a scriptural account concerning Jesus’ words spoken about the future of persons in this world who disregard God’s will. He addressed sin and death, and to whom should the oppressed flee for salvation.

Warning Signs?
First to do proper justice to any Bible study, we must prayerfully view each occasion as a conversation between ourselves and God. Therefore to interact with the text properly, we are to maintain a method of “exegesis”, rather than “eisogesis”. This means that we are to receive knowledge from God’s holy Word speaking clearly to us, rather than imposing upon it what we want to hear. If we sinfully do the latter, we place ourselves in great danger. The consequence can be much more horrid than experiencing physical death.
Doing proper exegesis with this text from Luke then, we note that it helps to cradle this wondrous message within the environment of what had been said both before and after our reading. Thus we get a better picture of the “sitz en leben” (situation-in-life)” to which the text relates. Using this technique, we find that Jesus taught while he continued undaunted toward the Jerusalem temple. He knowingly walked toward the cross of Calvary. While doing so, he emphasized to those around him that the conflict that our faith in God causes will put us at odds with those who are bent toward establishing or maintaining their own worldly powers.

Our Lord thus reminded his listeners that God confronts evil. This is why we clearly need to hear the warning. for as sinners we are in league with evil. The verses said that our Lord reminded his listeners of the Roman killings of Jews in Galilee, about how all died and everyone is considered the same in mortality. But we note that the text we find here was recorded Luke’s gospel alone. We must ask, therefore, why this is so.
To answer, first let us consider that this gospel was written c. 85 AD, likely in Asia-Minor. Therefore the gospel writing was more gathered and expansive than that of blessed Mark's witness (written c. 65-70 A.D.) My thought thus centers in the idea that this reading may more fully tell of this scene because many Lukan churches were receiving continued persecutions from Rome, but were gathering without the apostolic presence that the earlier churches enjoyed. As well, it is likely that Luke enjoyed greater resources for expanding the original witness. Consequently, relating Jesus’ conversation about persecutions and death became more important and could be more easily accomplished. Thus we wonder if the expanded text intentionally addressed growing anxieties specifically within Luke’s audience?
Take note that the reading reminded those of Luke’s house churches that death is our human lot before God. This stands historically, as the almost universal and unchanging divine punishment for human sin. Therefore, the reading clearly reminded Christian followers to repent of sins and doubt without delay. Through Luke, Jesus called upon them to realize forgiveness and the promise of eternal life that had been given to them through our Lord's sacrifice.

Why was this reminder so important? The answer I think resides in the unfolding history of the Church. By the time of this gospel’s writing and its distribution, stories of such as the horrific deaths that had occurred during fall of the Temple in Jerusalem, and the slaughter of Jews at Masada (c.70A.D.) had most certainly caused great fear in all the Jewish and Gentile communities. This fear, as designed by Rome, quaked persons in Asia Minor, Israel and Syria alike. We note that at the time of the temple's destruction, the Jews of Jerusalem had been widely dispersed by Rome. Thus the Jewish leaders had widely scattered, and had fallen to scapegoating in the synagogues of Israel and the Gentile regions. Consider that while yet steeped in the holy work of translating the Hebrew scriptures into Greek, they pointed beyond themselves to the “troublesome” Christians. They stated to suspicious Roman authorities that subversive Christians were causing trouble. First, they said the Christians were causing unrest, by failing to keep the Jew's kosher rules. Second, they were into such far out travesties as grave robbing and cannibalism. In this last the Jews railed hotly against Christians. They threw many out of synagogue membership clamoring that they “drank the blood and ate the body” as part of their cult's liturgical rituals. By complaining to the Romans who were charged with maintaining the peace, the Jews deflected Rome’s suspicions placed upon themselves... and regained a more tolerated status around the Empire.

Be Forgiven and Proclaiming!
We note that rather than reprisals, even in the face of threat an evangelical emphasis was next driven home by Luke. In the second portion of today’s lesson we see that he passed along Mark's recorded story of Jesus talking about the fruitless fig tree. The scene had been delivered to at least the church in Rome and Alexandria by the earlier gospel (Mark 11:12-14). We must therefore ask, “Why was this fig tree story used here?” I doesn't seem to fit in with the previous conversation.
The answer for its presence becomes clear as we remember that this section was likely derived directly from Mark… or from the same source that Mark used. It had warned Mark's communities against barrenness of witness. You see, the warning about being cut down as an unproductive branch was well placed. In Luke's gospel then, the focused task as inheritor’s of the apostolic message was that they were to remain faithful to the gospel proclamation, even though the apostles were gone from the scene. We are reminded that both Peter and Paul had died over a decade before this Lukan writing.

We are also reminded that this gospel reading told of certain physical death for every human being, and reminded of the established call to continue in the face of persecutions. The connection comes to us through Luke from the mouth of Christ. It was Jesus then, through the Spirit, who called Luke’s readers to repentance and forgiveness. They, and therefore we also… are called by him to “turn away” from depending upon how this world’s powers are going to behave. In the midst of our living and dying, we are to just bear fruit… and preach the gospel!
Given that all evil being the same in effect now as then, and that we humans are not now to hope for longevity or lasting accomplishment outside of Christ, let us be reminded in knowing that we are each sinful. Towers most certainly still fall upon us as well as the ancients. They do so upon us and upon everyone around us. Therefore, we Christians should realize that today those who yet live amid the echoes of the World Trade Center crash need to hear and be graciously baptized into the kingdom. You see, in baptism received by faith, we are receiving the promise from God that we are the recipients of eternal life. This life was and is yet given through the crucifixion, death and Resurrections of Jesus Christ.
Consequently, we of the Christian church have been given a gift which is to be opened, used abundantly and shared. By doing that task, we shall bear the fruit of God’s holy Word. Though we are shoveled alike into graves alongside unbelievers... laying in the dirt and manure of either local or world news... as redeemed sinners made saints our words may bring others into the kingdom of God. The very proof of the Holy Spirit’s working through our Christian witness shall be seen and heard by those who come after us.
Certainly, let us be reminded then. Though we are yet sinful sheep following our Good Shepherd, we are brought to realize that we share the character of Luke’s communities. We too wander distressed and scattered, but by this reading we of the Christian church may also see that our salvation comes not by our own doing, Through Christ's work upon the cross, salvation come to us through the power of the Holy Spirit working the miracle of faith within us. Jesus calls us through the Spirit.., “Turn around… be forgiven, and believe the Good News!” We who are the baptized today exist just as the churches of Luke, empowered only through grace upon grace. We remain called as those so long ago to proclaim salvation to others, so they may join with us at the foot of the cross.

Please be invited to view a recent personal video...

May the Peace of God, that surpasses all human understanding...
keep your hearts and minds in Christ Jesus our Lord!