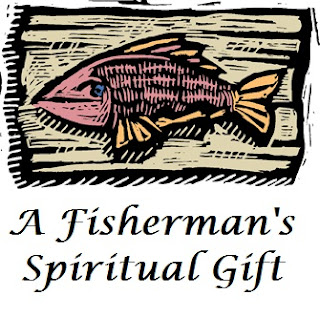 OUR BIBLE study for the Third Sunday in Easter comes to us from the Epilogue of the Gospel According to Saint John. In this final chapter which closes the gospel, we see that the Resurrected Christ Jesus supplied an echo to his followers from an earlier event, and thus provided his Church with a glimpse of their future in ministry. We read…

After this, Jesus revealed himself again to the disciples by the Sea of Tiberi-as; and he revealed himself in this way.
Simon Peter, Thomas called the Twin, Nathana-el of Cana in Galilee, the sons of Zebedee, and two others of his disciples were together. Simon Peter said to them, "I am going fishing."
They said to him, "We will go with you." They went out and got into the boat; but that night they caught nothing.
Just as day was breaking, Jesus stood on the beach; yet the disciples did not know that it was Jesus.  Jesus said to them, "Children, have you any fish?" They answered him, "No."
He said to them, "Cast the net on the right side of the boat, and you will find some." So they cast it, and now they were not able to haul it in, for the quantity of fish.
That disciple whom Jesus loved said to Peter, "It is the Lord!" When Simon Peter heard that it was the Lord, he put on his clothes, for he was stripped for work, and sprang into the sea. But the other disciples came in the boat, dragging the net full of fish, for they were not far from the land, but about a hundred yards off. When they got out on land, they saw a charcoal fire there, with fish lying on it, and bread.
Jesus said to them, "Bring some of the fish that you have just caught." So Simon Peter went aboard and hauled the net ashore, full of large fish, a hundred and fifty-three of them; and although there were so many, the net was not torn. Jesus said to them, "Come and have breakfast."
Now none of the disciples dared ask him, "Who are you?" They knew it was the Lord. Jesus came and took the bread and gave it to them, and so with the fish. This was now the third time that Jesus was revealed to the disciples after he was raised from the dead.
When they had finished breakfast, Jesus said to Simon Peter, "Simon, son of John, do you love me more than these?" He said to him, "Yes, Lord; you know that I love you." He said to him, "Feed my lambs." A second time he said to him, "Simon, son of John, do you love me?" He said to him, "Yes, Lord; you know that I love you." He said to him, "Tend my sheep."
He said to him the third time, "Simon, son of John, do you love me?" Peter was grieved because he said to him the third time, "Do you love me?" And he said to him, "Lord, you know everything; you know that I love you." Jesus said to him, "Feed my sheep.
Truly, truly, I say to you, when you were young, you girded yourself and walked where you would; but when you are old, you will stretch out your hands, and another will gird you and carry you where you do not wish to go."
(This he said to show by what death he was to glorify God.) And after this he said to him, "Follow me."  (John 21:1-19)

The Same, But Not the Same
In our study for this week, we read that our Lord Jesus gathered those who seemingly had assumed that even after all revelation they had witnessed, life was to go on as before Jesus’ ministry began. They adopted a “business as usual” lifestyle.  However, the Epilogue of John revealed otherwise are the plans of God.
First, we see in the text a recollection that Jesus had done the fisherman’s evening dinner event previously with his followers. We know of at least one other occasion as recorded in Luke 5:1-11. There we find that Jesus acted similarly when the disciples were called into the work of the kingdom. Indeed, much ministry had occurred around the shores of the lake. Thus it may be safely assumed that such an occasion had happened regularly for them. It seems that fishing was their main source of communal sustenance. Dinners were a celebratory custom.
The Lukan telling of this familial event is shorter and likely earlier in calendar than John. Therefore I believe that we may assume that in John, the message of this Epilogue’s later and longer, more detailed gathering... contained an additional message. The event subsequently stressed that the death and Resurrection of Jesus had not changed the call of his infant Church. As the Church had done before, so it would continue to do.
Please note the symbolism used by this Johannine writer. Again the catch is bountiful only when Jesus’ instructions were followed. We note that the meal site was already prepared by Christ. The scene included water, fire, bread and fish, to which the catch of the disciples was added. Thus described in John, based upon the Lukan gathering, we may postulate that the fish already present for the meal represented the disciples themselves; whereas, the fish they caught on that post-Resurrection day… prophetically depicted those who are to be brought in the future gathering of his infant Church. Therefore, on this prophetic occasion… the followers are shown as those persons whom Jesus had called… who would still gather, be fed in community, and be empowered by the Holy Spirit to continue their witnessing… in spite of their own, self-perceived human limitations.


Click Here To View Our Videos
This claim I make is based upon the subsequent Johannine record of the conversation between Jesus and Peter. Here it was revealed how the mind of those in the early Church seemed to be stuck in denial, as though the divine occurrence had changed nothing. It revealed that the disciples were in need of empowerment. Jesus’ dialog with Peter revealed this captivity.
When we read the text in English, we miss this very important Johannine nuance. This flavoring is demonstrated when Jesus asks Peter, “Do you love me", By quoting as such in the Greek language, John related that the word “agape” was eventually used for by Jesus for “love”. This word is normally used to describe only a perfect or “divine” love. Examine the text closely! Peter answers Jesus in the affirmative, but instead... he answered Jesus question using the word “phileo” which means “brotherly” love. This indicated that he loved Jesus as a “brother”. So John subtly revealed to the reader that Peter had not even yet fully apprehended his teacher’s divinity as the Messiah. Peter then heard our Lord's call to feed the lambs. Was this because there were some in the early Church who favored the worship of Peter, or his supposed faith descendants?
Jesus next repeated the question to Peter. Here it is not that Jesus’ misunderstood the first answer. Rather, this seemingly indicated that Jesus was not getting the answer our Lord wanted. Such was the infant Church’s inability. For that second query, Jesus received the same response from Peter. Jesus then repeated the feeding admonition.., but Peter was now progressively made responsible for feeding the not just the lambs, but the entire flock.
Finally, it seemed as though Jesus relented of the testing. He asked Peter a final time. This happened in almost an echo of that found in the earlier writing of Mark... where Jesus asked the disciples three times, “Who do you say that I am? But in this scene's finality, Jesus conceded the lesson's point and lovingly used the disciple’s “brotherly” love term.

Now it seems to a casual observer that Jesus, possibly out of love, accepted that his disciples could not quite grasp the meaning of his divinity. As the discourse continued, however, it was revealed our Lord told his apostolic leader prophetically about a crucifixion event that had already occurred in the writing of this gospel witness. By the power of the Holy Spirit, we thus know that Peter would regain his faith in Jesus as the Christ of God, and lose his earthly life in service to the Church.
You see, empowered unto the fullness of faith by the Spirit given at Pentecost, Peter and the other disciples successfully began great founding works of the kingdom. They encountered great amounts of risk and injury in their travels. When at last finally imprisoned, Peter was crucified unto death near Rome (c.68AD). We note also with astounding significance, that most of his brothers in the faith inherited similar persecution in other geographic locations. They had after all... faithfully... fed the sheep.

Being Fed for Mission!
We gather then that the final words of Jesus to his followers on that beach supply us with an early Eucharistic meal format. They and we are called to eat of the divine meal and then simply follow him. Consequently, as we who are now his followers enjoy the same Eucharistic remembrance and the actuality of Christ’s presence in the meal... we also take away from this reading the same sure call. We too receive the same admonition and instructions that he gave to the disciples on that day. The Risen Son of God, who yet gathers, enlightens and empowers his church through the Spirit of Pentecost, calls us to rise as well through the power of our baptism. Indeed, we who have now received baptismal covering which washes away sinful, self reliant nakedness acquired by wading through the world's polluted water.. now enjoy this wondrous gift given to us by Jesus. Held closely in our minds and hearts then, we carry that gift through heavy seas of sin and poor days of catch… until his glorious naves are full indeed. We are called to cast our nets, row our boats, and wade deep waters… knowing it shall be through the enduring power supplied by Spirit of God, that places persons around the warming fire of God’s love. So it is written, so shall it be.

Please know that you are invited to view our personal videos...

May The Blessings Of God Be With You Always