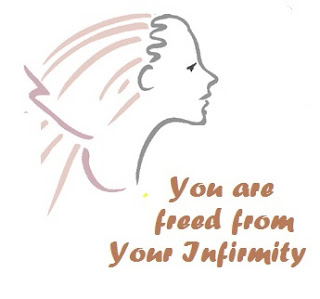 THE GOSPEL for the Fourteenth Sunday after Pentecost speaks to us of healing. We read about the gracious deeds of Jesus, the Word of God according to Saint Luke…

Now he (Jesus) was teaching in one of the synagogues on the sabbath. And there was a woman who had had a spirit of infirmity for eighteen years; she was bent over and could not fully straighten herself. And when Jesus saw her, he called her and said to her, "Woman, you are freed from your infirmity." And he laid his hands upon her, and immediately she was made straight, and she praised God.
But the ruler of the synagogue, indignant because Jesus had healed on the sabbath, said to the people, "There are six days on which work ought to be done; come on those days and be healed, and not on the sabbath day."
Then the Lord answered him, "You hypocrites! Does not each of you on the sabbath untie his ox or his ass from the manger, and lead it away to water it? And ought not this woman, a daughter of Abraham whom Satan bound for eighteen years, be loosed from this bond on the sabbath day?"
As he said this, all his adversaries were put to shame; and all the people rejoiced at all the glorious things that were done by him. (Luke 13:10-17)

No Side Job!
Instead of what seems to be a simple story about Jesus’ healing power, we find a dramatic prophecy. Without request, one day while teaching in a synagogue and on the way to the cross in Jerusalem, Jesus stopped for a moment to heal a long-suffered illness. He graciously reached out and healed even one who society had long deemed as having little value.
You see, our Lord graciously healed a woman who was considered by many in that religious gathering to be a second class citizen. She was a woman who society deemed as devalued “property”. Being ill for eighteen years, she likely suffered a much, much lowered “property value”… lower than any of the other women traditionally told to sit in the back of the worship space. Because of her persistent illness, she was likely banned completely from Jewish religious gatherings.
Nearly distracting from this healing miracle, however, was that Jesus did his healing work on the Sabbath. To the leader of the synagogue, his act seemed to override the traditional mandate toward that restful interval clearly recorded in scripture,

“Six days you shall labor, and do all your work; but the seventh day is a sabbath to the Lord your God; in it you shall not do any work, you, or your son, or your daughter, your manservant, or your maidservant, or your cattle, or the sojourner who is within your gates…” (Exodus 20:9-10)

We know that healing was regularly done by Jesus. Those who are familiar with scripture know that the gospels record multiple witnesses about healings done by our Lord. Some occurred on the Sabbath, (see examples of Matthew 12:11-12, Luke 6:6-11). Indeed, Jesus offered many traditional examples from Hebraic Torah in his ministry to justify his actions. These stated exceptions to the Law, and thus firmly established ground for such necessary acts of grace to be accomplished by him even during the Sabbath.
As we of the church consider this particular event, however, we might allude to the claim that this woman’s malady and delayed treatment could have been rightly blamed on her own collusion with the power of Satan and evil. We might claim along with others that she or her forbears, and more like her... must be possessed of demons. We may point out that she may have been accused of participating in persistent evil. Some of us might say that since evil and its power do not cease assailing, we are called to cite the modern maxim, “What goes around comes around!”. Subsequently, we raise that some persons just deserve their woe-filled station in life. But consider that by thinking these things, we are sinfully convicted of judging. We wrongly condone the withholding of graceful healing in the same way as the ruler of the synagogue. We delay the application of love.
Subsequently, I hold up this example of scripture before you and claim that God  makes wholistic healing of body, mind and spirit immediately available through Christ Jesus. Condemnations fall upon us, therefore, for our unbelief. Sadly, we too restrict the application of healing prayers that are to be made for needful persons on any day… or at any time.

Singled Out?
If we dare venture that this example was offered for good reason by Luke to his churches, we find it had a precise meaning and purpose for those within his community. The text opened a prophetic witness for our Lord’s people back then… and thus comes to us as well by power of the Holy Spirit.
Consider this thought! If the ailing and unnamed Hebrew woman represented more than her own personage to Luke, and his readers, the text also carries a pertinent message across the centuries to us. I offer this opinion with foundation, in that we are called to note that the woman being healed was exampled in scripture… without being named! Yet the number of years in her suffering was precisely published. I thus believe that this difference was deliberately scored. The vagueness of the one attribute, makes the number eighteen literally jump out to us from the Word! She represents more than herself to the church.
The reason I think is clear. If we estimate as many scholars do, that this text was written about. 85AD, we find that the years of her illness correspond backward in time to the heavy footfall of Roman rule upon the rebellious Jewish people of Israel. Looking back, we today thus study the historical record describing the encircling and fall of that Jewish peoples... in Jerusalem and at Masada.
Based upon this dating and history, let me offer to you that the woman then represents the early church, emerging from the wounds of several decades of both Roman and Jewish persecution, The question raised here is therefore… “Does the woman who was bent from long afflictions, a victim both to internally distorted religious law and external worldly powers.., represent more than herself in Luke? I do think so.
Additionally we might ponder, “Does she represent the illness in faith of the Israelites during the period after the fall of Jerusalem and Masada? Is she representative of those Jewish Christians who needed to receive a healing from our Lord… a healing that exists beyond human understanding? If so, I further ask, “Could this occasion noted represent a healing given to the people of God in Christ Jesus, one that reaches past them, far across time and place… to reach far beyond the eighteen years that the woman suffered… so that we ourselves may be wonderfully healed similar to the wondrous occurrence on that gracious day?” Again.., I believe so.
Consider with me that given this outlook.., we today may take from this lesson an occasion of great healing available for our own churches and lives. Surely, we hear how this healed “daughter of Abraham”, described by Luke, became accepted and renewed into the community of faith. The text subsequently relates that we then, as represented by her... are now accepted as the adopted of Abraham. We exist faithfully in like station to the woman who was ill for so long and shutout.
We read therefore that Jesus may yet call to us amid any year, month, week, or day and heal us. He most certainly is said to arrive during our religious attendance on Sabbath… so that we may be healed by God and restored to the kingdom. Surely through the power of the Holy Spirit, God does a great healing work at that particular time through his Son.
You see, during our worship we do receive healing forgiveness. As well, we of the church are sustained through weariness, being fed gracefully at the holy table. Therefore as we gather on any Sabbath to do the right work (liturgia) of the people of God, is it not true that we truly overcome our illness in faith… but not by our religious works… but rather by that which is freely given to us by our healing Lord?
You see, our Lord shall not pass by without healing us. Have we not been traditionally fed the body and blood of the same Lord Jesus who gave of himself so that we may be made whole? This is the empowering message of Luke that was written to a church that lived in a time of illness of great illness. The message was declared when persecutions and sicknesses of the world heavily burdened their proclamation. The message came to those churches at a time when Christians were considered as impure, and were shunned from the parent synagogue communities. I contend, therefore, that just as their path was spurned at the turn of the first century, so it is even for us!
Amid societal rejections caused by our faith and its expression in a world and culture that worships many competing gods, let us simply arise on any day... including Sunday... and say “Come Lord Jesus!” Let us pray that we may be called before Him to become witnesses of His love.  “Lord… just say the Word and we shall be healed!”