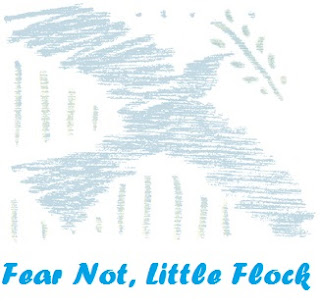 OUR GOSPEL lesson slated for the Twelfth Sunday after Pentecost is offered by the community of Luke. The words relate to all, that the concern of our Lord was for his followers to be ready for heavenly travel…

"Fear not, little flock, for it is your Father's good pleasure to give you the kingdom. Sell your possessions, and give alms; provide yourselves with purses that do not grow old, with a treasure in the heavens that does not fail, where no thief approaches and no moth destroys. For where your treasure is, there will your heart be also.
Let your loins be girded and your lamps burning, and be like men who are waiting for their master to come home from the marriage feast, so that they may open to him at once when he comes and knocks. Blessed are those servants whom the master finds awake when he comes; truly, I say to you, he will gird himself and have them sit at table, and he will come and serve them. If he comes in the second watch, or in the third, and finds them so, blessed are those servants!
But know this, that if the householder had known at what hour the thief was coming, he would not have left his house to be broken into. You also must be ready; for the Son of man is coming at an unexpected hour."  (Luke 12:32-40)

In the final days before Jesus went up to be crucified in Jerusalem, our Lord warned his followers concerning the impending fulfillment of prophecy. Though the hearers did not know at that time that he spoke of his going to the cross for our salvation, Jesus related to them about the security they could possess though tumults assail.
Much of what is read here comes from the “Q” source document, so we see this text found also in Matthew, but not in Mark. Here we see in Luke that the reading included a firm admonition to ward off fears. Jesus warned his people, somewhat affectionately, by using the term “little flock”. This agrarian sense was much used for God’s chosen people in the Old Testament. Therefore Jesus’ apostolic audience could identify with his words. However for us, whether the flock our Lord spoke of at this time consisted of sheep or birds... we cannot tell just from this particular reading. We do note that the previous text used also by the Lutheran Church-Missouri Synod for the day, taught about the birds of the field which neither sowed or reaped. This would seem to indicate that at the time... flight was his emphasis.

Radical Routing?
Thus a question comes across to us about how large a flock was meant? It was an uncertainty which perplexed those such as Peter, who listened closely to his rabbi’s words. We might ask ourselves, "Was Jesus speaking just to the apostles? Or was Jesus, through Luke, speaking to all the baptized disciples who later heard and read his Word?"
We know for certain that the instructions he gave were not easy to follow for anyone who deemed themselves successful in worldly matters. Sell possessions? Give alms to the poor? Coming directly from the mouth of Jesus, being relayed to Luke’s communities, and passed on by the Holy Spirit through history to us… these instructions still seem like challenging words. Though many today would like to ignore these as meant just for the apostles, I have serious reservations about that conclusion.
Matthew’s account reads similar in that Jesus related that we are not to “lay up treasures”. Given that we have just read from Luke about the rich man and his barns in last week’s lesson, it now seems that we can see the route laid out. Following Jesus means that we, even today… must rearrange our travel priorities. We must be willing to travel light.
While we need remember the context in which these words were originally spoken, to truly grasp the meaning we need only ask whether the message still applies! We know that Jesus was going up to Jerusalem to offer himself up as a divine gift before God, as redemptive payment for the sins of everyone who would believe in him. By his doing so, those that would believe in what he accomplished would teach others… and all would eventually be threatened by competing authorities. The scavengers gathered. The message we carry, therefore, as coming from the original apostles, and the churches of both Luke and Matthew… by faith also now applies to us!

Hit Air Pockets?
Remember that sin, and our participation in evil has not changed since the days of the apostles. There were that time, and still are now persons to whom religious air pockets are repugnant in their worldly flights, changing that course which is plotted toward riches. Those who are well invested in this world’s assets... as an island paradise escape... do not want a savior who will distract them from their destination.
We of the church must note this persistent straying, and remember this tendency within the societies in which we live. However erroneous in mindset these fleeing persons are, we must know that they will persecute those who undermine their way. This warning from our Lord subsequently carried with it great portent. The warning is issued for the hearers of that day, the churches which received the words of Luke’s gospel, and we ourselves who are brought into the modern church .
As evidence, consider that soon after these words were spoken by our Lord, he was crucified and his apostles were hounded. Also, by the time of Luke’s writing and ministry, persecutions had begun for Christians who worshiped in the synagogues. Any infant “little flock” Christians who would not give up their material wealth for the faith and travel lightly... thus clinging only to the gospel… would fall away. They were swallowed by the futile wanderings of Israel.
We see, therefore, that traveling light was a skill needing to be learned by those who were following the course plotted for the Christian faith. The lesson taught to us by the Holy Spirit is that we need be aware of our baptismal take-off and landing priorities. We are admonished to either hold to material wealth… or adhere to the way of the cross! We need consider before we go through divine flight detectors, to which do we hold fast?
Scripture tells us that the final approach is fast upon us, and we do not know the day or hour of our Lord’s return. Consequently, we are those who must also pray, plan, work and watch together… anxiously waiting while our Lord as pilot seemingly stays out too late.
In doing so, we must always be ready to receive him among us and hear his gentle shout. This is the Christian faith as lived out by any traveling through a sinful and troubled world! Let us then be like our Lord Jesus. who trusted in the Father. He would see his own Ascension to heaven, and know of his coming back in the future to call his people and judge the world. So we must fly right and try to be like him, trusting the prophecy that our Lord gave to us.
Therefore, while we are surely not yet certain as to the time of his coming, we should always be ready like an anxious bride traveling to her wedding… for we know that Jesus promised to be with us through the power of the Holy Spirit. That is the living, everyday definition of faith... believe the promise! If we as the people of God say that we must stay quietly in our homes to take care of our accumulated property, let us be reminded by this scripture to first be wise for our souls. Watch and be ready; as ready as the best servant of His house can be. Travel light… for we surely know that the Lord is at hand.

May The Lord Bless You and See You Safely On Your Way!