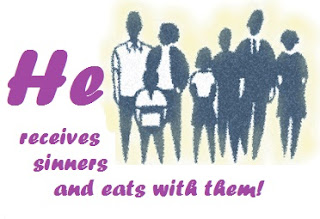 IN OUR CELEBRATION for this week after Pentecost, we hear from the Gospel According to Saint Luke. Being empowered by the Holy Spirit, the gospel writer related about our Lord’s penchant for saving the very least of us.

Now the tax collectors and sinners were all drawing near to hear him. And the Pharisees and the scribes murmured, saying, “This man receives sinners and eats with them.”
So he told them this parable: “What man of you, having a hundred sheep, if he has lost one of them, does not leave the ninety-nine in the wilderness, and go after the one which is lost, until he finds it? And when he has found it, he lays it on his shoulders, rejoicing. And when he comes home, he calls together his friends and his neighbors, saying to them, ‘Rejoice with me, for I have found my sheep which was lost.’
Just so, I tell you, there will be more joy in heaven over one sinner who repents than over ninety-nine righteous persons who need no repentance.
“Or what woman, having ten silver coins, if she loses one coin, does not light a lamp and sweep the house and seek diligently until she finds it? And when she has found it, she calls together her friends and neighbors, saying, ‘Rejoice with me, for I have found the coin which I had lost.’
Just so, I tell you, there is joy before the angels of God over one sinner who repents.” (Luke 15:1-10)
Rescue Mission?
With both gospels likely having received the account from the “Q” tradition, Luke related this scriptural parable to a greater extent than Matthew. The scene he described occurred during our Lord’s final earthly journey toward Jerusalem. The connection is thus made for the reader… that the journey of the shepherd described in the parable... and our Lord’s traveling to Jerusalem... are unavoidably linked.
Through the parable, Jesus described the divine purpose of his travel. According to Luke, Jesus told this story before a gathering that included teachers of the Law and their scribes. We note at the outset of the lesson that their murmuring was duly included deliberately by Luke. The consternation the authorities then expressed was that Jesus, though rumored to be going to Jerusalem to proclaim leadership, troubled them because of his association with a lower class of people. He did not court the leaders present, nor did he endorse any other source of established tradition. Instead, Jesus joined with sinners! He sat and ate with those persons who many considered as outsiders. Therefore, he was a challenging the accepted idea of the Jews by keeping separate sensibilities and religious practices.
In answer to the subdued voices spoken then in clandestine intent. Jesus told a parable about a shepherd who left the many in order to retrieve a lost sheep. He also told them about a woman who searched to find a small treasure that was lost.
Both examples our Lord taught on that day notably went against the perceived value system being used by the leaders within the religious practices of that day. We need to remember that for many persons who challenged Jesus’ affinity with the lowly, considered worldly richness as evidence of God’s favor. The questions they harbored were therefore, “What is the importance of those sinners who sat and ate with Jesus?’ Why did Jesus prefer sitting with them?
After the story was told, they still scratched their heads. What was one lost lamb that anyone would jeopardize an entire flock, leaving them with less supervision? Would not they collectively be more subject to wandering and predatory attack? Clinging to their relative financial and societal success as the keepers of the Law, the haughty questioned our Lord's motives and touted their perceived ideas of superiority... in both matters of religion and business. I have little doubt that those leaders either missed grasping his message entirely, or understood him completely and were threatened by the work that Jesus was doing.

Righteous Rejoicing!
By his intent toward saving the sinful and lowly who would hear his words through parables, Jesus described for his haughty audience the very core of God’s mission upon earth. Jesus, as the Good Shepherd, was born into the world in order to save those who stood convicted before the Law. These persons, who bowed as guilty before the Law of God, had at first believed themselves as completely lost. Initially correct in their assumptions, they likely deemed themselves as irretrievable because of their their sin and and worldly poverty. The burden may have seemed so great to them that the required offerings needed to obtain justification and the subsequent celebration of Passover observances at the temple… were far greater than they possessed. Those rowdy lost ones, especially the rabble and poorest of the poor, likely saw no discernible pathway to justification before God. Indeed within the constructed realm of those leaders who counted on worldly possessions and practices, we those who looked down upon those failing to achieve the corralled and fenced world of their circle. The impoverished poor became viewed as sinful, stubborn wanderers. They were seemingly not even worth the effort of retrieval. The leaders thought the rabble were but stubborn sheep... only suitable for shearing or slaughter. Of what concern would just one of them be?
But God who values each, even the lowly, lost and brokenhearted… sent His Son for their salvation. Jesus stayed with them. Jesus loved them. He taught them and he turned them. The Good Shepherd  sought them out. He lifted them up and carried them to safety... indeed saving them through his sacrifice upon the cross.
You see, according to Luke, Jesus deliberately sought the lowly in heart. He taught them and led them, and then proceeded to take stripes of the whip and suffering of the cross to pay the price for their salvation. Consequently, we Christians today know that by the power of God’s loving righteousness these were given faith and were saved by grace. It is in their path that we are called to follow.
Remember! These were not delivered by the forlorn accomplishments or earthy richness gathered in the confines of any religion or society. Indeed as a people called by the Holy Spirit, we consequently need remember that though the lost may not have even realized their peril, when learning of their sinful shortcomings and the punishment due each person, each was brought by faith toward repentance. They asked forgiveness for the sake of Jesus Christ, and were eternally rescued by God. In this way, the Father provided the divine shelter purchased by the cross. Since that day, through the Holy Spirit, salvation has been made available for even the far outcast... and the very lost. Of such Good News is today’s lesson. Let us be glad and rejoice in it. Spread the Word!

Please know that you are invited to view this personal video concerning the great work of evangelism...
Blessings to You!