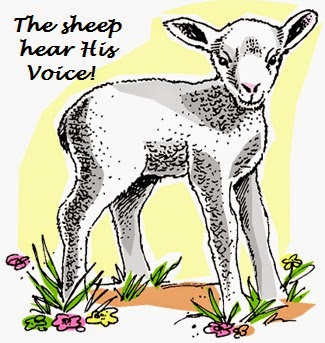 THE FOURTH Sunday of Easter presents a reading which comes to us from the Gospel According to Saint John. In this lesson, we experience how Jesus taught his followers that they were to be made secure in him…

"Truly, truly, I say to you, he who does not enter the sheepfold by the door but climbs in by another way, that man is a thief and a robber; but he who enters by the door is the shepherd of the sheep. To him the gatekeeper opens; the sheep hear his voice, and he calls his own sheep by name and leads them out.
When he has brought out all his own, he goes before them, and the sheep follow him, for they know his voice. A stranger they will not follow, but they will flee from him, for they do not know the voice of strangers."
This figure Jesus used with them, but they did not understand what he was saying to them.
So Jesus again said to them, "Truly, truly, I say to you, I am the door of the sheep. All who came before me are thieves and robbers; but the sheep did not heed them. I am the door; if any one enters by me, he will be saved, and will go in and out and find pasture. The thief comes only to steal and kill and destroy; I came that they may have life, and have it abundantly. (John 10:1-10)

Leading Us Within and Without…
Our lesson recalls Jesus telling this story just after his attendance at the Feast of Tabernacles (booths) in Jerusalem. The feast celebrated Israel’s survival during the wilderness wandering out of Egypt. The event celebrated an era of freedom provided by God. It was also marked for that special time when not only freedom was given, but divine sustenance was also provided. You see, during the journey Israel was given special bread made from flour naturally presented (manna.., meaning "What is it?").
However, during this particular remembrance that Jesus attended, some leaders were spurred by an evil spirit. Various religious and political factions challenged our Lord’s teaching authority. In that same spirit, they also questioned the possibility of his being the Messiah (or "Christ" if we are saying the title in Greek).
In answer, Jesus addressed the issue of true leadership by telling this example of the relationship between a shepherd and his sheep. We in the church today need to hear and understand this illustration clearly, for it applies to us as well as the followers of our Lord during his earthly ministry. Indeed we to need pay close attention to this warning, just as the early church of the gospel writer.
The story Jesus told compares the motives of a thief, with that of an authentic shepherd. In using these known agrarian roles, Jesus tried to reveal a great truth with which his listeners could identify. He based the story upon Israel’s historical references. You see, scripture tells that many noteworthy in Israel had first been shepherds before they became leaders. Moses had been a shepherd. King David had been a shepherd. If the Messiah was to be a leader of his people, therefore, he would walk in the spiritual footsteps of those leaders as signified in the psalms (see Psalm 23). More so, as the innocent Good Shepherd, he would exhibit extreme sacrificial shepherd characteristics. He would lay down his sinless life to save a flock that had strayed.

Many in Israel had already claimed to be the Messiah, and many more claimants would come in future days. We note that this malady had occurred before, and continued after the life of Jesus in this world. Demonic claims emerged in the time of John’s churches across the Roman Empire… and we also find this fact true in our own day. As this occurs, evil powers work to consume and destroy us. How are we then… being sheep hearing many shepherds… to know the difference between a thief and those empowered by the Holy Spirit of God? Clearly and simply, the story Jesus relates to those of us who live as His sheep… so that we may not follow haughty religious and political leaders. He warns us that some of these thieves are devious and crafty.
Our defense? Jesus tells us that we shall be able to know the difference by virtue of his voice! His sheep shall know his words. They shall respond only to their own shepherd. Thus as we study scripture today, we may make the same literary connections present for those in the early Church. Through scriptural words read and spoken aloud in Church and more... we recognize the true Word! To do this solidly, we must first understand that scripture properly interpreted testifies about scripture. Word reinforces the Word! For example, we need only to first recall the prolog of this gospel writer…
“In the beginning was the Word, and the Word was with God, and the Word was God. He was in the beginning with God; all things were made through him, and without him was not anything made. That which was made was life in him, and the life was the light of men.” (John 1:1-5)
Therefore it is through the very Word of God given, whether read silently or spoken aloud, that the Messiah’s sheep shall know their shepherd. Through this Word speaking out to us, without our bending meanings to suit our own appetites, we sheep shall know his authentic voice and teaching. Where and when the Word is delivered rightly… in that place and time... we today may even now... truly come to know the Messiah.

As Jesus taught those gathered, therefore, he reminded them that in those days a man’s flock was kept for night security in a pen with other sheep. The gatekeeper who guarded the fold in order to withstand the evil spirits of night, would open the pen at dawn to admit a shepherd. A good shepherd would then call his sheep. The sheep would respond only to their own shepherd’s voice, his words would call them… for they knew him.
A good shepherd knows his own because the sheep had history with him. They had previously been fed properly and made safe by his presence. They knew his words. Using this analogy, therefore, Jesus reassured his disciples. The scripture gives record of this story so that it was revealed to John’s churches. Christians within our own day hear it… that we also may know that we are made safe because a Good Shepherd sought and secured us.
However, notice here! The lesson shifts symbolism as the reading unfolds. The persons listening to Jesus did not initially understand the analogy. They did not comprehend the symbolic connections given.., so Jesus illustrated more thoroughly using another image. Using a more direct approach, Jesus explained that he was the door to the sheepfold. Using a phrase that began with “I am… (“ego ami” in the Greek), he stirred Hebrew memory. Taught by history like those who recalled God’s favor at the Feast of Tabernacles, his words recalled the holy unspoken name of Almighty God. “YHWH” means “I am that I am”. Thus Jesus, the Messiah of God, said “I AM the door”, assuring us today that he has divine control over the heavenly gate. Further, because he is the divine door to the kingdom, his followers are made secure. They shall all shall have life and have it abundantly.

Salvific Singularity!
Therefore in the Christian church today we are called in the power of the Spirit to note the singularity. There is only one door… he who is the Good Shepherd! This Truth stands in the face of a thieving world. We live in an age that may be likened to the days of John’s gospel, and sometimes worse. We live in days where modern communication comes at people from many religious expressions and philosophies. These beckon to lost sheep who hungrily wander through worldly pastures. Within the modern communication methods of TV and Internet exists many religious or political characters who deceive for profit. Some lambs are fooled into walking paths of atheism, agnosticism, naturalism or pantheism in order to further themselves or those they serve. Some  thieves fake Christianity and Christian ways to fool the faithful. These last attempt to claim messianic territory and prosperity for themselves or others. What can we do but place them in chains and convict them by using the Word of God rightly interpreted? Check with scripture! Base your life’s path on the Word of God. There exists only One who is worthy… the Messiah sent from God. The words of the prophet Isaiah predicted his coming…

“All we like sheep have gone astray; we have turned every one to his own way; and the Lord has laid on him the iniquity of us all. He was oppressed, and he was afflicted, yet he opened not his mouth; like a lamb that is led to the slaughter, and like a sheep that before its shearers is dumb, so he opened not his mouth.
By oppression and judgment he was taken away; and as for his generation, who considered that he was cut off out of the land of the living, stricken for the transgression of my people?
And they made his grave with the wicked and with a rich man in his death, although he had done no violence, and there was no deceit in his mouth. Yet it was the will of the Lord to bruise him; he has put him to grief; when he makes himself an offering for sin, he shall see his offspring, he shall prolong his days; the will of the Lord shall prosper in his hand;” (Isaiah 53:6-10)

Thus the Messiah, born Jesus the Christ, came into this world to be our Good Shepherd. He was then, and is yet now… the only begotten Son of God. He was born of Mary and was rejected by those jealous of his calling. He is the Good Shepherd, standing now over against heresies of universalism and other false religions. Note then that we are an empowered flock wandering in a world of competing demonic allegiances.

Read the Word!
Know the scriptures! We are to imitate that Lord whom we follow. We note that he was crucified and buried, but rose again and now sits on the right hand of Almighty God. Through the power of the Holy Spirit working through the Word and Sacraments in our own lives, he continually strengthens and preserves us. Through this power provided from the Holy Trinity, God freely gives to us the blessings of life eternal. You see... just as in the time of the beloved gospel writers, we find the power of the Word rightly interpreted brings the modern church eternal Truth. We come to truly know, and echo…”Christ is Risen!” The Messiah is risen indeed.

Please be welcomed to watch our evangelical video... "Rustlers or Rescue?"

May Almighty God Guide Your Way!