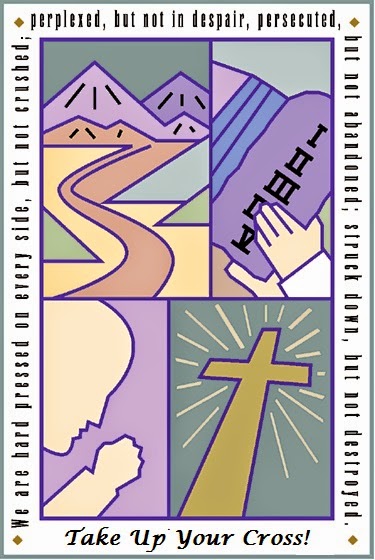 WORSHIP AND reading on the Fourth Sunday after Pentecost, continues to hear our Lord as recorded in the Gospel According to Saint Matthew. In this revealed text, the calling of Jesus’ disciples was given weighty consideration. In it we find our Lord's clear warning to them that while working beneath the mandate of God in the world, Christian disciples will be set apart.

“Do not think that I have come to bring peace on earth; I have not come to bring peace, but a sword. For I have come to set a man against his father, and a daughter against her mother, and a daughter-in-law against her mother-in-law; and a man’s foes will be those of his own household. He who loves father or mother more than me is not worthy of me; and he who loves son or daughter more than me is not worthy of me; and he who does not take his cross and follow me is not worthy of me. He who finds his life will lose it, and he who loses his life for my sake will find it.
He who receives you receives me, and he who receives me receives him who sent me. He who receives a prophet because he is a prophet shall receive a prophet’s reward, and he who receives a righteous man because he is a righteous man shall receive a righteous man’s reward. And whoever gives to one of these little ones even a cup of cold water because he is a disciple, truly, I say to you, he shall not lose his reward.” (Matthew 10:34-42, RSV)

In, But Not Of…
This text from the church of Matthew related that shortly after comforting his followers, Jesus admonished them about persecutions already set in motion. In the midst of the early church, therefore, we consider that at the time of writing these conditions likely had come to their immediate doorsteps. This gospel, written in final form likely by c.85AD, called the Christian church to gather amid stories and rumors of growing hostilities. Subsequently, out of the early congregations in Antioch of Syria, the writing reflects what Jesus had told his original followers.
We note that this text revealed what Jesus had said... that he came not to bring peace, but a sword. Thus a people who had already accepted Jesus as the Messiah, and had gathered around recognizing him as the “Prince of Peace” who was appointed between God and man... these words of spiritual warfare came by the power of the Holy Spirit. The words made sharp witness. The Church of the late first century received this warning gospel message through the likes of Peter, Paul, and Barnabas.


Therefore passed on by the infant Christian sect, the gospel message was already separating them as distinct from the ancestry of the Jewish faith. We of the modern Church need be reminded here that Jesus used a familiar text from the prophets, to tell the first disciples that this was to certainly unfold...

“Put no trust in a neighbor, have no confidence in a friend; guard the doors of your mouth from her who lies in your bosom; for the son treats the father with contempt, the daughter rises up against her mother, the daughter-in-law against her mother-in-law; a man’s enemies are the men of his own house.
But as for me, I will look to the Lord, I will wait for the God of my salvation; my God will hear me. Rejoice not over me, O my enemy; when I fall, I shall rise; when I sit in darkness, the Lord will be a Light to me.” (Micah 7:5-8)

Thus with the sword of God’s holy and prophetic Word that cut our Lord’s followers to the very bones and marrow of their being, the original disciples received stark warning. The world would become increasingly a hazardous place for any Spirit-filled witness. They were already being cut asunder as a number of believers were falling away. They were already being set apart from the familiar... and would undergo hazardous futures.
How hazardous would it be? It was made clear from this original scene that occurred before Jesus’ crucifixion, that the gospel declaration would separate many. It would alienate married couples, parents and children. It would separate old friends. The message of the cross… that is, Jesus Christ crucified and Risen for our salvation… would bring many disciples into gross isolation. Many would be taken to their death. By the time of this writing, laboring under Roman rule the church of Matthew had already seen that prior decades had proven the reality.The image of death loomed large.


First came the spiritual death. In the mid-first century the early church in Antioch was already being cast from the Jewish synagogue ( gathering place ). History relates that the Christian disciples were being thrown out of synagogue fellowship. They received shunning forcing them apart from the very roots of Jewish life. Long thought to be the main thread of personal and communal stability, the religious shunning action challenged them. It was veritable cutting off… unto spiritual death. The disciples were therefore cut loose and following the path of Jesus Christ himself.
As well, the Christians began to be physically betrayed to the governmental powers of the Roman world. So, amid infant congregations beginning to meet in house churches and cemeteries... the warning from the mouth of Jesus Christ was therefore repeated…. but came with more immediate understanding. Under such tyrants as Emperor Nero, Christians had already been placed upon crosses in the public square and along the roads to Rome...

“… he who does not take his cross and follow me is not worthy of me. He who finds his life will lose it, and he who loses his life for my sake will find it.”


Taking Up Your Cross?
Therefore we of the modern church, who by the grace of God have received the Word, are asked to view this scriptural picture for our own day. We need to realize that the text yet instructs any disciple who gathers faithfully with the true Church in these perilous times.
Certainly we modern disciples are threatened by latent and bold persecutions, spiritual warfare and internal Church strife. Consequently, we are admonished to cast away those who claim that we may work our way to heaven through our allegiances to family, community tradition or social deeds... declaring lies of either secular or religious bent. We are urged instead to carry the weight of the saving cross in faith. We must not embrace a message of profit for ourselves… stealing glory which alone belongs to Christ.


Remember! We who are the baptized in Christ are empowered to carry the cross through and past heretical, progressive interpretations. We must cling to the gospel message first heard. Indeed the subtle, strong roots of both family and familiar settings in community and society may try to nail us down into apostate heresies that lure us toward such as unfit marriages, murderous abortions, and illicit ordinations. These surely attempt to pound apostate spikes into the heart of our spiritual beings like those iron piercings that attempted to hold our Lord.
To be sure then, by the power of the Holy Spirit we are called to remain gathered in the true Word and not be deterred. Do not, sisters and brothers in Christ, hold on to any religious obedience that hammers false scriptural thoughts or merely glorifies human social endeavors. Cast aside errors expressed from either demonic church or state. Search for... and embrace... the right interpretations of scripture!


Indeed, I urge you to grasp tightly upon our Lord’s call to the Church to bear the cross. Stay secure in his salvation that has been made by God the Father through faith alone, given to us by grace alone, and always... always...  determine to follow our Lord and Savior, Jesus Christ... and pander after no one and nothing else.


We offer this message based upon the reading that you have received. It is designed to empower your evangelical efforts to the world around you.