Living in the Spirit? 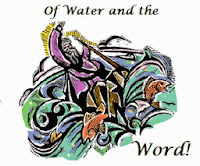 OUR STUDY for the Sunday of Pentecost comes to us from the Gospel According to Saint John. The text discloses how, through Christ, a mere symbol becomes a living reality…


On the last day of the feast, the great day, Jesus stood up and proclaimed, “If any one thirst, let him come to me and drink. He who believes in me, as the scripture has said..,
‘Out of his heart shall flow rivers of living water."
Now this he said about the Spirit, which those who believed in him were to receive; for as yet the Spirit had not been given, because Jesus was not yet glorified. (John 7:37-39)

Our biblical author wrote about a celebration that occurred late in the earthly ministry of Jesus. In that event known as the Festival of the Tabernacle, the religious leaders of Jerusalem usually gathered the people for a cleansing ritual of the temple. The celebration had become a repeated historical tradition... a remembrance which recognized God’s providence upon his people during their flight from hard bondage in Egypt.
During that ancient and wondrous journey under the leadership of Moses, God had provided water for the people of Israel out of solid rock (as noted in Numbers 20:2-13). Applauded since before the time of David, the psalmist wrote of God’s marvelous deliverance…

In the sight of their fathers he wrought marvels
in the land of Egypt, in the fields of Zoan.
He divided the sea and let them pass through it,
and made the waters stand like a heap.

In the daytime he led them with a cloud,
and all the night with a fiery light.
He cleft rocks in the wilderness,
and gave them drink abundantly as from the deep.

He made streams come out of the rock,
and caused waters to flow down like rivers.
Yet they sinned still more against him,
rebelling against the Most High in the desert.
(Psalm 78:12-17)

To bring due remembrance of both divine gift and human failures, the festival traditionally lasted seven days. Each year during the final observance, water was carried from the pool of Siloam to the temple. Carried in pompous circumstance within a golden pitcher, the blessed water set apart by the priests would be poured upon the altar in the temple. This was a popular event that was traditionally repeated.  The national cleansing of the altar thus symbolized the Hebrew's preparation for the day wherein the Messianic kingdom would arrive. In the writings of the prophet Isaiah, God had promised their return after a time of exile…

You will say in that day: “I will give thanks to you, O Lord, for though you were angry with me, your anger turned away, and you did comfort me.  Behold, God is my salvation; I will trust, and will not be afraid; for the Lord God is my strength and my song, and he has become my salvation. With joy you will draw water from the wells of salvation.
And you will say in that day: “Give thanks to the Lord, call upon his name; make known his deeds among the nations, proclaim that his name is exalted. “Sing praises to the Lord, for he has done gloriously; let this be known in all the earth. Shout, and sing for joy, O inhabitant of Zion, for great in your midst is the Holy One of Israel.” (Isaiah 12:1-6)

However, the dedication gathering for that year in Jerusalem was different. Jesus attended. In that particular year, during the final purification of the temple altar.., within the ritual that traditionally occurred during the last and greatest day of the celebration… our Lord stood up to speak.
Jesus spoke out loudly from the midst of those gathered. Rather than just sitting quietly in his place among high and learned rabbinical teachers, he broke in abruptly. He broke from their customary, symbolic piety.


Though merely a lowly, itinerant country rabbi, Jesus stood boldly. Our Lord spoke so that all present could hear. Standing such in startling manner amid the ceremony, Jesus thus changed forever the nature of the water upon the altar. He spoke prophetically… that the water was soon to become more than a symbol. The water would be changed to a living (in the Greek - ρευσουσιν) river. Being such it would invite those receiving that water to participate in God’s reality. The water at the altar would be a “living” (meaning “active current” or “gushing” of water). It would be a reality which was to be poured out upon God’s servants.

Really Present…
Jesus spoke out, therefore, about his Church yet to be born.., a community to be formed in the near future by the power of the Holy Spirit. The Holy Spirit, also sent by the Father, was to be poured out during Pentecost. The Spirit’s coming into the world would forever quench the thirst for God found within anyone who would believe in Jesus’ sacrificial act. The witness of John’s gospel therefore stated clearly that the sacrifice of Jesus, with bold beginnings in the temple, was completed by our Lord upon the cross.


Let us now be reminded that there upon the cross Jesus spoke. “I thirst”. It is he then who took our sinful place and suffered our thirst for spiritual communion with the Father. That thirst, which occurs though the presence of a sinful dead calm water exists on the altars of our lives, could not be quenched by humans nor their sacrifices offered. In contrast Jesus, being the innocent sacrifice… would be raised from the dead and forever alive. Only Jesus could satisfy with the living water; the promise of the Spirit fully given. The Spirit would not be just alongside his disciples, but within them… abiding in oneness with all who would become the infant church at Pentecost.
Indeed, we know from historical record that baptism was poured out as such a gift in John’s churches in the latter days of the first century. Falling upon those newborn churches, the Spirit given in the living waters of baptism overcame their fear of death, just as God had overcome death in Christ Jesus. These were the first drops of living baptismal water… the sweat of God welling up from God's love... and the beginnings of a graceful torrent wending through turmoils that were to come. Indeed this living water given has endured through persecutions, persisting in its flow even unto our own day.
Why so? Surely you know! In, with and under the waters of Baptism comes the Holy Spirit. The Spirit comes to us and remains with us for all time. Consequently we are thus secure in God. Upon earth the gift of the Spirit expressed in its fullness sets us aside for the work of the kingdom. Note what was said by Martin Luther…

“Baptism is a very different thing from all other water, not by virtue of the natural substance but because here something nobler is added. God himself stakes his honor, his power, and his might on it. Therefore it is not simply a natural water, but a divine, heavenly, holy, and blessed water—praise it in any other terms you can—all by virtue of the Word, which is a heavenly, holy Word which no one can sufficiently extol, for it contains and conveys all the fullness of God.
(Large Catechism, Article 0, Para. 17. Tappert, T. G. (Ed.). (1959). The Book of Concord  (p. 438). Philadelphia: Mühlenberg Press.)


In our own day, however, we have those who yet despair. Let it not be so amongst us. For like a steady, unceasing flow of this living water the followers of Jesus Christ wash away even the hardest human monuments. By our proclamation of the Word, the watery biblical message flows by the power of the Holy Spirit even into the environments of dead, whited sepulchers that pass themselves off as the Church. Thus God’s love swells out into the world. Those who hear by the power of the Spirit rise up, bubbling forth as they are given eternal life.

From John’s pen, therefore, we read the Good News and are encouraged in remembrance of the living water poured out from Jesus’ body upon the cross. We, the baptized of God, are brought by the Spirit to the altar of God’s temple. The act of God in baptism, being completed only by God, indeed sets us apart. We are chosen… baptized to be his servants, not because we are better than other persons... but that we are gracefully singled out. We may thus do as our Lord has done. Committed in Resurrection faith, we have been given the power to stand up in the assembly. We are empowered to speak the Word fearlessly out in the open spaces of our lives. That was the gift given to us at Pentecost. Let us be glad and rejoice in it.

We offer this Pentecost video for your perusal...


May the Holy Spirit Guide Your Paths!