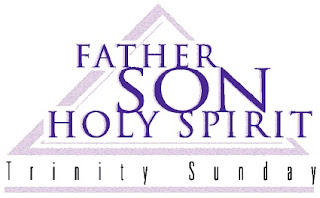 FOR HOLY TRINITY Sunday, we have two possibilities of gospel text. First, from one denominational aspect comes the reading of John 8:48-59, which is used primarily by the Lutheran Church-Missouri Synod (LCMS). That text was covered here in our study three years ago and is repeated in this blog. That selection was made by me since we were newly of the North American Lutheran Church (NALC). To obtain that witness, click here obtain the previous commentary.
Today, however, we concentrate on the text received from John 16:12-15, used by many congregations within the Evangelical Lutheran Church in America (ELCA). This text covers the instance in John’s gospel when Jesus explained the coming of the Holy Spirit upon the life of the disciples. The text reads…

Literary Flashback!
As we read this, let us be reminded that we have just celebrated Pentecost. By doing so, we have heard of the work of the Holy Spirit, in that during the “Feast of Fifty Days”, the disciples received empowerment for witnessing. The Spirit enabled them to speak out using many languages amid a crowd gathered for the festivities. From that time and place... the church grew within a century into Galilee, Syria, Asia Minor, Egypt, Rome and beyond.
In considering this rather explosive growth during what historians sometimes term as the Roman peace… the Pax Romana… we can see where the infant church was dynamic in geographic reach. By doing so, it quickly encountered the need to explain to both the learned and the uneducated, the holy relationships that had eternally existed between the Father, the Son, and the Holy Spirit. They were hard pressed to explain the work of our Creator, Redeemer and Sanctifier. The difficult task, begun here greatly by this discourse in John… was picked up in other authoritative writings that we now find gathered together in the New Testament.
The problem they wrestled with, was answered by what we Christian now know as “apologetics”. Though do not be confused, for it is not that we are apologizing for our Lord in any way, but instead attempting to explain the Holy Trinity to the world around us. This became an important task for the early church as it was assailed by various heresies that tried to make Jesus Christ a lesser being than the Father… and promote other such untenable waverings. Be assured as well, that it is yet the task of the modern church as we counter a universalistic thrust trying to blend our faith with other forms of worship from around the globe.
To guide us in a more stable way, we find that the early church struggled in the Spirit to offer the “Apostles Creed”, which appeared out of the need to communicate the faith to new proselytes. We notice that this creedal formula established a methodical precedence in argumentation... because it dealt logically with each person of the Trinity, one at a time, as it was recited by persons undergoing catechetical instruction. However, afterward to outsiders, the church elaborated theologically in creed by offering up a more thorough apologetic… and the Nicene Creed came into being. The Nicene statement was more detailed in citing not only the Trinitarian view, but offered a bit more concerning each divine person’s attributes in working for our salvation.
Finally, in approximately 325 A.D., in the midst of yet more internal and heretical turmoil within the church... concerning the character of the Trinity… the Athanasius Creed was developed. This creed goes farther in enlightening our theological understanding, in that instead of simply saying what God is… that creed now also firmly tells us what God is not.

Why So Many Creeds?
As time passed, it seems that the Athanasius Creed recognized fully the tough job of describing that which is indescribable… the awesome person of God… revealed as the divine Father revealed through Jesus Christ, and the Holy Spirit. We find that despite our finitude and sin, the church endured while working in a rather difficult position in trying to explain the unexplainable love of God. This happened by the power of the Holy Spirit as we tried to wrap words around the Omnipotent, Omniscient and Omnipresence that is beyond all understanding… and find that in the end we always fall short. Thus we often find ourselves dragging a wounded theological limb when we boldly speak to the atheists or agnostics in our society. We are however encouraged by this gospel text, in that it tells us that God poured out the Spirit of the Father and the Son upon us at Pentecost… and does so also upon those with whom we witness. We know that God has declared to us the salvific secrets of the kingdom made available in Baptism, Holy Eucharist and proclaimed Word. All we need do is walk peaceably in the footsteps of our apostolic predecessors, simply telling the faith of the church using the historical creeds. The entire historical work, as we do this, goes far toward the salvation of those with whom we interact. All we need to do for Christian evangelism is to do as our Lord’s instructed… go… baptize… preach… teach… in the name of the Father, the Son, and the Holy Spirit. Holy Trinity Sunday thus reminds us… Proclaim the gospel!

Donate to our Evangelical Efforts!