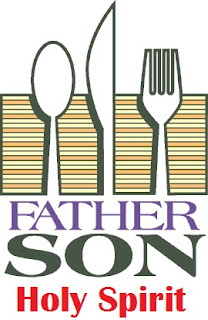 THE GOSPEL reading for Holy Trinity Sunday comes to us from John. As Jesus taught in the temple, those in authority there challenged his right to proclaim God’s Word to the people. Jesus stood amid the powers of this world as the Christ…to fight the good fight for our salvation.

The Jews answered him, "Are we not right in saying that you are a Samaritan and have a demon?"
Jesus answered, "I have not a demon; but I honor my Father, and you dishonor me. Yet I do not seek my own glory.., there is one who seeks it and he will be the judge. Truly, truly, I say to you, if any one keeps my word, he will never see death."
The Jews said to him, "Now we know that you have a demon. Abraham died, as did the prophets; and you say, 'If any one keeps my word, he will never taste death.'  Are you greater than our father Abraham, who died? And the prophets died! Who do you claim to be?"
Jesus answered, "If I glorify myself, my glory is nothing; it is my Father who glorifies me, of whom you say that he is your God. But you have not known him; I know him. If I said, I do not know him, I should be a liar like you; but I do know him and I keep his word. Your father Abraham rejoiced that he was to see my day; he saw it and was glad."
The Jews then said to him, "You are not yet fifty years old, and have you seen Abraham?"
Jesus said to them, "Truly, truly, I say to you, before Abraham was, I am."  So they took up stones to throw at him; but Jesus hid himself, and went out of the temple.  (John 8:48-59)

Who Are You?
The Gospel According to Saint John tells us about the confrontation of authorities that occurred as Jesus did ministry within the temple during the Feast of Tabernacles. After accomplishing a healing in the temple, Jesus drew the attention of both the spiritually curious and the Pharisaic followers of the Law. Jesus gathered all persons around him, and he taught them. Present were both those who believed and those who would challenge his teaching. The Pharisees, likely sensing the challenge, immediately accused him of not being a Jew, but a Samaritan. Thereby they seemed to attempt at lowering his identity in the eyes of those around him. They challenged his right to be there teaching. Jesus retorted, answering their resistance by stating his relationship with the Father.
Additionally, they accused him of having a demon, one who would spirit away the minds and faith of those who listened. Jesus answered them that he honored the Father. This the Pharisaic tongues could not answer, for demons cannot honor the Father.
Then Jesus startled them unto their very roots. He said that those who behold his Word shall never see (not be beholding) death. We note that this last scriptural statement, however, is somewhat clipped in our modern translation. The Revised Standard Version (RSV) leaves out the “into the aiona (eternity)” phrase, which indicates eternal status of believers through His prophetic claim that they would not see death.
The “Jews” as authorities being described in Johannine broad strokes, rose up as opponents. They said that Abraham and the prophets died. With this, they challenged Jesus’ bold statement, by asking whether he claimed to be greater than Moses and other prophets by his saying if any one keeps his word, he shall never taste (geusetai) death."
We note the subtle shift in sensory method for grasping the word death (thanatos). Jesus says you shall not “see” or “behold” death, and the Pharisees choose to use the word “taste” This change though slight, I feel is important.
The question arises, “Was the shift part of the original Hebraic conversation in the temple? Or is the shift only apparent in the Greek?” In the Hebrew the word “hinneh” is used for “behold”. And as well, the word “yakal” means to dine or eat. If these were then used, the change made by the Pharisees in either language would vocally be notable, and not accidental. With this shift boldly evident we may conclude that while Jesus communicated that followers through faith would not “see” spiritual death; unbelieving Jewish authorities who were trapped in the historicity and traditions of the eating and tasting “feast” of tabernacles could not view Messianic truth. The change in word use was deliberate and a tell-tale sign of traditional rigidity.
It is my opinion that the Johannine author used this word shift to note for Christian believers concerning the religious inabilities of the Jewish community in his own setting.  Without the gift of faithful sight given through the Holy Spirit, the synagogue patriarchy of his time could not discern that the taste of the Sacrament was more than just bread.
Thus originally appalled, unable to access the co-identification of Jesus with the Father, the Pharisees and others were blind to the “Light” beyond darkness, and could not taste the Bread of Life… Jesus Christ who comes to his followers in, with, and under the Sacramental bread. The unbelieving Pharisees and leaders who had thus strayed so far from the faith of Abraham, stood stymied by Jesus’ bold declaration, and could not truly  ”taste” the holy body and blood of our Lord.

Why So?
Of the Father, Jesus said, “I know Him”, and then added “…Before Abraham was, I am.” Using the concept of eternal life in the Father, Jesus clearly states oneness in the “I am” of the holy naming. In boldly saying "Before Abraham was, I AM." Jesus clearly co-identified Himself with the Father. This reveals Abraham as created being, and our Lord as Creator. Therefore Jesus was and yet is greater than Abraham. “I AM” speaks of self-sustaining existence. He is the Eternal God and ever the same.., the Eternal Bread of Life.
Thus Jesus was thus stated by John to be not only before Abraham, but before all worlds. As Mediator, he was the appointed as the Lamb who slain from the foundation of the all things. As Christ, he existed before Abraham was even a twinkle in the eye of his earthly adopted father. The Risen Lord Jesus was, is and always shall be God. All Wisdom, Righteousness, Sanctification, and Redemptive power is His. All who live in Him shall see the Truth as a gift, be given insightful faith, and therefore have eternal life. In these verses we thus have a doctrine of the everlasting character of God through Christ and the calling of those who see and shall keep the word of Jesus. Subsequently, as believers; we shall by no means be enslaved by death nor taste it. We are juxtaposed over against those who cannot see His nature, and shall both see and taste death.

Though atheistic and agnostic challengers stand in our own day and argue about the existence of God, and thus do know not God since they do not accept the gospel of Christ Jesus, our Lord… they are already judged…

This is evidence of the righteous judgment of God, that you may be made worthy of the kingdom of God, for which you are suffering--   since indeed God deems it just to repay with affliction those who afflict you, and to grant rest with us, to you who are afflicted, when the Lord Jesus is revealed from heaven with his mighty angels in flaming fire, inflicting vengeance upon those who do not know God and upon those who do not obey the gospel of our Lord Jesus. They shall suffer the punishment of eternal destruction and exclusion from the presence of the Lord and from the glory of his might.  (2 Thessalonians 1:5-8)

History does repeat… and just as those who were about to stone Jesus for blasphemy on that day so long ago, were thwarted in their evil as he withdrew… those who rightly know the truth of Jesus Christ are called to declare that this Jesus voluntarily went to the cross in His own time. He confronted the enslaving powers of this world. With the divine power of the Father through Resurrection, Jesus overcame both sin and evil so that we might see salvation and know more of him. Those who discern the Light of Christ follow him steadfastly professing what we know and believe concerning God. We are heirs of those who first saw… Abraham's true faith, and Moses’ witness… and we rejoice in looking forward to that day when our Savior appears in glory to the confusion of His enemies and the fulfillment of glorious salvation for all who believe.

To View a House Church Video and Help Christian Outreach!