Of Places and Times... 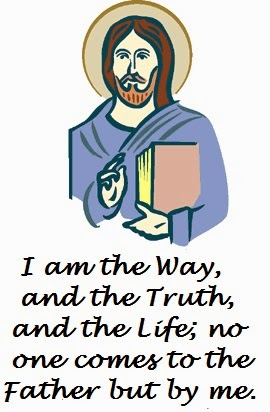 THE FOCUS for our reading provided on Fifth Sunday of Easter comes to us from the Gospel According to Saint John. The gospel writer stated clearly that Jesus had described a shared ministry amongst his followers. Jesus told the disciples of his oneness with the Father, and stressed that he would return as the message of salvation would be carried far by his followers through the power of the Holy Spirit…

“Let not your hearts be troubled; believe in God, believe also in me. In my Father’s house are many rooms; if it were not so, would I have told you that I go to prepare a place for you? And when I go and prepare a place for you, I will come again and will take you to myself, that where I am you may be also.  And you know the way where I am going.”  Thomas said to him, “Lord, we do not know where you are going; how can we know the way?”  Jesus said to him, “I am the way, and the truth, and the life; no one comes to the Father, but by me.  If you had known me, you would have known my Father also; henceforth you know him and have seen him.”
Philip said to him, “Lord, show us the Father, and we shall be satisfied.”  Jesus said to him, “Have I been with you so long, and yet you do not know me, Philip? He who has seen me has seen the Father; how can you say, ‘Show us the Father’? Do you not believe that I am in the Father and the Father in me? The words that I say to you I do not speak on my own authority; but the Father who dwells in me does his works. Believe me that I am in the Father and the Father in me; or else believe me for the sake of the works themselves.
“Truly, truly, I say to you, he who believes in me will also do the works that I do; and greater works than these will he do, because I go to the Father. Whatever you ask in my name, I will do it, that the Father may be glorified in the Son; if you ask anything in my name, I will do it. (John 14:1-14)

Be Assured!
From this reading found exclusively in John’s gospel, we find a prophetic scene. In the last words of the previous chapter, Jesus had predicted that he would be put to death. Following that pronouncement, he assured that in spite of what would happen in the near future, they were not to lose heart.
Jesus said clearly that he was going away, but he would return. But most important for the disciples and the Church even unto this day… is to remember that Jesus said he had prepared places (Greek – topon) for them. Jesus thus foretold to his unknowing disciples… that future proclamation of the Good News would go out much farther than any of them could imagine. Additionally, he said that the news will endure.
I contend that the disciple’s confusion here as exhibited by Thomas, simply states to us that the faith needed for the infant Church to break out into the world was not yet firm. It would be a gift to be given to the disciples by the Holy Spirit. This was that which had not yet been provided to the disciples in the Upper Room on that Passover evening.


We note two specific phrases here that give evidence that John stressed hard against a gnostic theme. He reminded in our text that Jesus taught that we can’t get to heaven by using our knowledge. Looking at the words, we see that John reminded in scripture that Thomas had said… “How can we know the way?”
In side note, therefore, history reveals that before the early days of the Church an exclusive society had developed out of Greek philosophy. That thinking taught that a person could only arrive in the heavenly realm by religiously using secret knowledge. One had to be systematically “wise”! Only then could you arrive to the divine realm through the shadows of life. In those days, these so-called wizened gnostics were known as people of the “Way”.

We note here, however, that Jesus responded firmly to Thomas in response to his wanting to know “the Way”. Students of scripture remember here that Thomas would be the one disciple set apart who would soon seek “proof” of Jesus’ Resurrection. Our Lord answered his query by saying profoundly…

“I am the Way… and the Truth, and the Life;
no one comes to the Father but by me.”

Over against today’s cerebral thrust toward progressivism and universalism within society and religion, we thus find that Jesus yet states his exclusivity… expressed in the finality of his deeds upon the cross. He predicted that his death, and the grace which would unfold through his crucifixion and Resurrection, would reconcile us with the Father. It has indeed. His payment of undergoing punishment for our sin and unbelief was all that is needed for our salvation. Thus it is that not only the early church of John, but even we who worship Christ today through the power of the Holy Spirit… are encouraged to hold tightly to this Truth. Knowing this ultimate Truth, and having faith in Christ Jesus... gives us the power of wondrous proclamation.


In the following discussion between himself and Phillip, Jesus clearly stated his relationship with the Father. This foundational theological statement of oneness shines brightly in John’s gospel. The words were a forerunner of right Trinitarian expression as provided by the Holy Spirit. The oneness of Jesus with the Father is well attested in this apostolic record, which was likely written down in final form just before the turn of the first century. As well, it is well-attested earlier in biblical history by the other gospel writers of Matthew and Luke. Also in the book of Acts of the Apostles, we find likely penned later by Lucan directive…

And there is salvation in no one else, for there is no other name
under heaven given among men by which we must be saved.” (Acts 4:12-13)

Thus we find this reading of John’s gospel message provides guidance even for today’s Church. First we find in modern times that our places in the flow of history exist as passed along by others in the faith. Our place has been set aside since the beginning. By the power of the Holy Spirit, we are indeed also graced and counted as disciples.


As we unpack these thoughts of John’s witness, therefore, we find that the Holy Spirit is described as the one driving the message of salvation. Hard against even the charge of sexism, I believe that we know the identity of the “he” given.  We read the text of John closely again...

“Truly, truly, I say to you, he who believes in me will also do the works that I do;
and greater works than these will he do, because I go to the Father.

I offer here that Jesus was not just speaking of inquisitive Philip nor doubting Thomas… or any of the disciples that were with him. According to John, our Lord Jesus was referring to the gift of the Holy Spirit. The Spirit was expressed in ancient time with a forceful masculinity of character that it would empower the witness of those gathered in the Upper Room. For us then, who work now in the right feminine characterization of the church, we come to know that the footsteps of these ancient witnesses show us the Way! We are as one Church called to participate actively in ministry. We are to be nurtured. We are to grow in faith and promote the church’s proclamation and mission.

Greater Things!
But know this! Just as the early church of John did before us, we shall encounter resistance. Those early Christians toiled in gospel expression as the powers of Roman society railed against them and killed them. Yet they were faithful. They often witnessed unto death (The word “witness” comes from the Greek word, martyrion or martyr).
Therefore, though we may also come to be called as martyrs we are to cast aside fears about offending. We face those who put their faith in mere human accomplishments. As human collectivism and modern scientific research offers modern society such mixed dualities as atomic healing through X-rays… overagainst massive nuclear death through bombs, we are called to simply stand firm and proclaim the gospel clearly. We are to state simply that which the Holy Spirit has revealed. Let us say again and again of Jesus.., that “He is Risen… he is risen indeed!”

You are invited to view our pastoral videos... click on the image below!

Cast Away Fears; You Are Baptized!