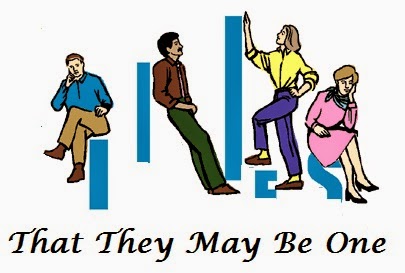 OUR READING for the Seventh Sunday of Easter comes once again from the Gospel According to Saint John. Within it, Jesus prays for his mission and followers…

When Jesus had spoken these words, he lifted up his eyes to heaven and said, “Father, the hour has come; glorify your Son that the Son may glorify you, since you have given him power over all flesh, to give eternal life to all whom you have given him. And this is eternal life, that they know you the only true God, and Jesus Christ whom you have sent. I glorified you on earth, having accomplished the work which you gave me to do; and now, Father, you glorify me in your own presence with the glory which I had with you before the world was made.
I have manifested your name to the men whom you gave me out of the world; yours they were, and you gave them to me, and they have kept your word. Now they know that everything that you have given me is from you; for I have given them the words which you gave me, and they have received them and know in truth that I came from you; and they have believed that you did send me.
I am praying for them; I am not praying for the world but for those whom you have given me, for they are yours; all mine are ours, and yours are mine, and I am glorified in them. And now I am no more in the world, but they are in the world, and I am coming to you. Holy Father, keep them in your name, which you have given me.., that they may be one, even as we are one. (John 17:1-11)

Knowing Eternal Life!
This section of scripture nests into Jesus' conversation that occurred at Passover. The disciples were gathered just before his arrest and crucifixion. John related that our Lord had just finished telling his followers that they would be scattered into the world. However, our Lord instructed that they should not fear… for he had already overcome the world. With the exception of Judas, all disciples professed faith in him, though they likely thought that they only were going to rule over Israel. Therefore, what he said in this prayer, as recorded by John… likely gave them pause.
Indeed, Jesus looked upward and asked the Father to glorify him. The "glorify" word said in the Greek language…”doxason”, means to shine with the brightest light of perfection. This is a brilliance beyond all human understanding. The prayer was intimate to the Father, from the Son, in the same way that had been demonstrated previously in John 11:41, and also in Mark 14:36, and Matthew 11:25.
We gather that his prayerful request for glorification was spoken here by Jesus so that the Son could return the love the Father had given to him. You see, the work that Jesus had been doing upon earth as fully human and fully God… had been planned from before the world began. The work rightly accomplished by God alone exhibited, therefore, a quality of communication which had eternally existed. Jesus prayerfully stated this fact that the Father already knew…. reminding the Father though no reminder was needed… that everything was unfolding according to their divine, predetermined plan.


You see, all salvation for sinful humanity was to be finalized. Jesus would die at Calvary and be raised to life again. In this way, he would pay the penalty for human sin. Those persons who believed in him... and his gift... would have eternal life.
However, a problem became evident for his followers. The disciples had no real idea what the phrase “eternal life” meant. We can even now sympathize with them. So it was that Jesus defined it then for his followers. Thus we too learn of wondrous eternal life without end. I repeat our Lord's words here for emphasis…

“And this is eternal life, that they know you the only true God, and Jesus Christ whom you have sent.”

This verse clearly stated by John was to explain why the divine conversation was so very important. It stated that Jesus the Christ is the Son, the Savior sent by the Father... and both persons are God. The occasion of the Crucifixion was a mutually planned event, a weapon standing gracefully over against the sinful ambitions of humanity. This salvation of sinful humanity had been prophesied before Jesus' birth. The Psalmist had indicated as such when he spoke of the future Davidic King…

“He who sits in the heavens laughs; the Lord has them in derision. Then he will speak to them in his wrath, and terrify them in his fury, saying, ‘I have set my king on Zion, my holy hill.  I will tell of the decree of the Lord: He said to me, “You are my son, today I have begotten you. Ask of me, and I will make the nations your heritage, and the ends of the earth your possession. You shall break them with a rod of iron, and dash them in pieces like a potter’s vessel.”
(Psalm 2:4-9)

Secured…
The prayer of Jesus, who was and yet us the holy and perfect descendant of David, next shifted focus to the disciples. After the revelation was stated before them about what was happening, the prayerful words of our Lord turned the Father’s attention to the future welfare of Jesus’ followers. Jesus reminded the Father who needs no reminding, that his followers were given to him by the Father. We notice, therefore, that of all the sinners of the world who could have been chosen… God had deliberately picked those eleven as an act of divine will and decided grace.
Why these eleven? We do not know. Nor do we need to know. This was certainly done not by any good character of the disciples… for they were finite and sinful men who would scatter at the crucifixion of our Lord.
Today, these words of Jesus simply remind us that God gracefully chose those few sitting with Jesus... to carry a gospel message of love forward through history. Those chosen few, who remained seated at the Passover table for that blessed meal... would be the ones to reveal the brightness of the Son to the world around them.

Consequently, Jesus stated a request that none of them be lost. We need to note that this prayer was related in John’s gospel before the Church of the late first century. It was a church being oppressed. They had been driven from the historic faith bonds previously enjoyed in the dispersed synagogue communities. They were scattered, often meeting in house churches and cemeteries. The followers who read and heard this gospel therefore walked dangerously in the footsteps of those who had gathered in the Upper Room. In their own place and time, they needed to hear the message of Jesus Christ.... and now we who meet today do as well. Centuries ago, amid the din and destruction of the world around them they needed to hear that they would endure… for they already had the gift of eternal life. As is said in scripture, they were assured…

“ For it was fitting that we should have such a high priest, holy, blameless, unstained, separated from sinners, exalted above the heavens. He has no need, like those high priests, to offer sacrifices daily, first for his own sins and then for those of the people; he did this once for all when he offered up himself. Indeed, the law appoints men in their weakness as high priests, but the word of the oath, which came later than the law, appoints a Son who has been made perfect for ever.”
(Hebrews 7:26-28)

So it is with the Church today. Like the community of John, we are yet a people torn by many factions, torments and illnesses… and we forget that we are a “forever” church. We need to gather around the table of the Son to be reminded, forgiven and empowered.


Today, though some have left previous denominational expressions due to apostasy and schism, we are yet called to remember that we are the Church called to the evangelical mission. Though some denominations push heretical agendas which may not be pleasing to our Lord, the gospel as expressed by right interpretation of scripture relates that we who seem scattered must still take heart. Remember! Our Lord prayed for us to the Father!

Through the power of the Holy Spirit we are therefore called by this gospel lesson to see that we shall indeed be one, as our Lord Jesus and the Father are one. This is Resurrection faith as given to us by the Holy Spirit… for Jesus Christ who was dead yet lives. So it is written… and so it shall forever be.

Please be invited to view our evangelical Christian outreach...