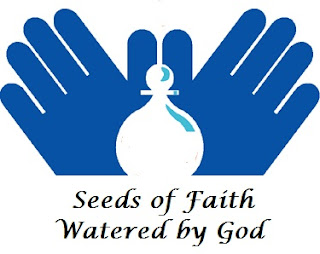 THE GOSPEL reading for this Third Sunday after Pentecost comes to us from the church of Saint Mark. Within it we are given several parables concerning the kingdom of God. We read…

And he (Jesus) said, “The kingdom of God is as if a man should scatter seed upon the ground, and should sleep and rise night and day, and the seed should sprout and grow, he knows not how. The earth produces of itself, first the blade, then the ear, then the full grain in the ear. But when the grain is ripe, at once he puts in the sickle, because the harvest has come.”
And he said, “With what can we compare the kingdom of God, or what parable shall we use for it? It is like a grain of mustard seed, which, when sown upon the ground, is the smallest of all the seeds on earth; yet when it is sown it grows up and becomes the greatest of all shrubs, and puts forth large branches, so that the birds of the air can make nests in its shade.”
With many such parables he spoke the word to them, as they were able to hear it; he did not speak to them without a parable, but privately to his own disciples he explained everything.   (Mark 4:26-35)

Listen Closely…
As we examine this lesson it is revealed to us that Mark has linked two parables together. Therefore we may consider that for us to comprehend the message given to the early Christians, we should pay attention to the steps provided to them, like ascending ladder boards that are nailed to a gospel tree. First we note that modern biblical authorities claim that Mark was written in approximately 65-70 A.D. using oral remembrances and various written sources. Those remembrances were recorded in deliberate sequence. Within this text, therefore, we climb through a section of parables that lead us toward a given apex or conclusion.
Accepted today is that no matter the source for Jesus' parables, the writer used the collection to accurately reveal a beautiful portrait of the kingdom he promised. The ability for us to comprehend this gospel gift is best supplied by prayerfully reading or listening to the entire gospel. You see, the ability to understand the gift is given by the Holy Spirit to those who follow in faith throughout. The message was clearly stated at the very beginning of the gospel. There we find…

Now after John was arrested, Jesus came into Galilee, preaching the gospel of God, and saying, “The time is fulfilled, and the kingdom of God is at hand; repent, and believe in the gospel.”  (Mark 1:14-15)

Thus we find that the author wrote from the very beginning that the kingdom of God is a state of existence that arrived in the fullness of time in the presence of Jesus himself. You see, the kingdom truly arrived in reality as Jesus began to minister and teach in Galilee. The divine realm thus was made manifest to us in the good news of his preaching.
However, for reasons known to God alone, not all sinful persons could know the redemptive gift. As evidenced in Mark, even the disciples would at first misunderstand. The reading demonstrates that persons who lived stubbornly in sin were as finite human beings prevented from knowing the infinite loving character of God. Subsequently, those who held to their own understanding would never know. Even the disciples would come to know only by the grace of God.
Thus our gospel writer related that only those who were to be given faith as a divine gift by the Holy Spirit would come to know the “messianic secret”. The secret was revealed to them in parables and spelled out as elementary for us in the entire gospel. We read…

And when he (Jesus) was alone, those who were about him with the twelve asked him concerning the parables. And he said to them, “To you has been given the secret of the kingdom of God, but for those outside everything is in parables; so that they may indeed see but not perceive, and may indeed hear but not understand; lest they should turn again, and be forgiven.”  (Mark 4:10-13)

With this we can see that Mark... in his own time of writing... used the collection of parables arranged sequentially to inform his audience. His message concerned the salvation purpose of our Lord’s parables and ministry. Jesus was ushering in the kingdom in answer to the problem of humans being trapped in sin. The ability of the “chosen” few to see its workings was a gift being bestowed by Jesus, but the future could only be comprehended as the Holy Spirit enabled them.
Consequently we see that Jesus taught his disciples in very simple agricultural terms about the kingdom as a mysterious, but living and thriving entity. Here in Mark we see that by using examples, the first parable told the crowd that the kingdom of God would appear before them suddenly. From planting to harvest, the growth process of it was said not to be a thing which could be controlled by human works. Hence we see the imagery in the parables revealing that the kingdom resulted only from following divine planting instructions. Also, in reading the sequence of the parables we understand how they became a source of revelation.
The scenes first described the great mystery of evangelical witness. The kingdom seed is planted and grows. We know not how. Described before Mark’s churches was the mere speaking of the Word as a mustard seed miracle. The faith seed, so seemingly insignificant as the telling of the gospel story in the darkness of a catacomb, was in the Spirit a seed planted that would grow the Church far beyond all expectations. The growth would endure even unto the final day of promised harvest.
As we read farther in Mark, we find that the disciples only vaguely comprehended these stories. Through the horrid days of Jesus’ crucifixion and death, they were portrayed by Mark as humanly failing to grasp the fullness of meaning. They did not quite understand. As the women ran from the empty tomb we see that they were sorely afraid. Something beyond human comprehension had occurred. They did not understand the monumental germination of the kingdom. It was only after the gift of the Holy Spirit had come upon them at Pentecost, that the bounty of harvest became a vision more clearly seen by the infant Church.

History Teaches…
The Church of Mark, having received the witness of Paul’s letters and Peter’s witness saw that the curtain that hid the “holy of holies” was torn and cast aside. The chosen people of God suddenly knew the ways of the kingdom. As the early Church read Mark’s message in the latter half of the first century, they received a curative smack alongside the head. Within Markan stories, the scripture told the persecuted churches that the kingdom of God was at already at hand, even though full understanding was still not their lot. Those early churches knew that the kingdom of God had arrived for those who first heard Jesus’ words in Galilee, even though the first disciples obviously had not understood. The church of Mark thus knew that the kingdom depended on the power of God and not on our human understanding. The Church is simply called to follow in faith.
Following in faith was difficult for those early Christians. The kingdom of God needed to be seen as present with the Church, even as they suffered persecution from those who could not comprehend its arrival. We today must then also see that the sprouting of the kingdom in our own midst is something that will often occur undetected. As it happens, we need not understand the fullness of God’s grace. We are only called to marvel and follow in faith by declaring the gospel message. We of the modern Church are blessed to know that the kingdom of God is an eternal realm. The fullness of the divine eternal reign shall be made manifest to us in God's own good time. This gracious gift was provided to us through the sacrificial crucifixion of Christ Jesus.
By this good news we may know that we are saved and empowered. We are planted. We are watered by the Holy Spirit in baptism. Through that marvelous Sacrament provided to us, forgiveness is given to us and the shell of sin breaks open. We are freed in Christ. Faith germinates and spills out from within us.
Consider this! We are called to follow our Lord, for he was indeed the divine Redeemer planted in the earth like a seed and yet rose mysteriously... though we know not how. Jesus was the Son of Man who seemed to be an insignificant country preacher, but was sent as a veritable mustard seed who when planted was resurrected by the love of God the Father.
Think of it clearly! Our God thus gave rise to a great Church. The Christian people, free as birds from the punishment of sin, endured being tortured and buried by the world because they were provided a vision of the bountiful branches. Thus the Church grew.
This was and yet is the good news concerning eternal life that Mark told. He declared the gospel to the churches of the first century, and through them the message came through the Spirit to us. Therefore, brothers and sisters in Christ, know that these sequentially-arranged parables found here are not just random placements of stories copied down by an ancient author. The Holy Spirit brooded over these seeds planted. The Spirit guided the writing of Mark. The discourse was written so that we should know the deep and mysterious workings of God’s kingdom. So it shall be.
Click Here To View Pastor's Blog
For now, let us repent our sins of unbelief, turning to bow in sinful ignorance and ask forgiveness. Let us come before our Lord who has made forgiveness and this understanding possible. Surely, as scripture reveals, when we bow and ask forgiveness from God for our own smug unknowing, but ask in the name of Jesus Christ who taught us these secrets in parables, we are lifted up to the highest branches. It is Jesus, the Son of God crucified and Risen who lifts us to life and has revealed this to us through the Spirit, through the wonderful gift of these parables written.


Please be invited to view this outreach video...

May The Spirit Of God Guide You Always!