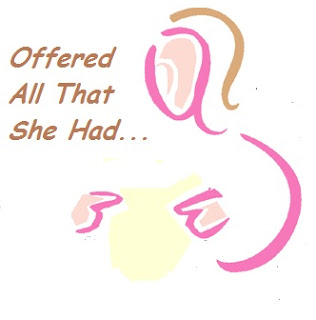 FOR THE Twenty-Fourth Sunday after Pentecost, we hear from the Gospel According to Saint Mark. The text speaks to us concerning right offerings. Jesus pointed his disciples toward a proper understanding our true purposes and wealth.

And in his teaching he (Jesus) said, “Beware of the scribes, who like to go about in long robes, and to have salutations in the market places and the best seats in the synagogues and the places of honor at feasts, who devour widows’ houses and for a pretense make long prayers. They will receive the greater condemnation.”
And he sat down opposite the treasury, and watched the multitude putting money into the treasury. Many rich people put in large sums. And a poor widow came, and put in two copper coins, which make a penny.
And he called his disciples to him, and said to them, “Truly, I say to you, this poor widow has put in more than all those who are contributing to the treasury. For they all contributed out of their abundance; but she out of her poverty has put in everything she had, her whole living.” (Mark 12:38-44)

Measured Importance?
Within this reading a comparison was constructed. Two categories exist over against one another. The first raised was that of the scribes who promoted themselves as “Rabbi” (teacher) with great flourish. Though they drew no salary, the position each possessed gave them seats of honor, fine garments of office, and ample opportunities for influence. They worked in concert with the accepted social measure for success, which held that those who gained power, position and riches were the favored of God. They cultivated this, even while some distorted that honored position in order to rapaciously exploit the more vulnerable in society.
However, Mark described here that Jesus challenged those who were considered more abundant and successful. Being considered also as a rabbi by many, an established teacher of the Jewish faith, he stood up boldly in the temple and condemned the scribes for their pride, rapacity, dead formalities, and hypocrisy. He thus voiced clearly that God hates all undue pretense. In light of this accusation, one wonders what that he might say today in judging many Christian clergy, rapacious evangelical personalities and self-serving laypersons.
In contrast, Jesus is described as lifting up a widow who made an offering in the temple. He said the woman exemplified not only the poor of society, but she was framed amongst the poorest of the poor. Totaling her account historically, we see that being a woman in that ancient society she had no independent social status. Also, being a widow, she had no financial support. Another previous lesson has taught us of our Lord’s talk with the Samaritan woman, and her poverty of losing a husband which often left women embroiled in sinful lifestyles just in order to survive. Having little status in her own society then, we see that this woman’s plight could be easily victimized by such as jaded scribes. Thus we can clearly see that as she came to the temple, her poverty was likely as more than financial.
Yet, we also note here that our Lord remarked that when she made a offering, though the amount did not equal that of the rich... the amount she gave clearly stated her total dependence on God. She was… as we might say… all in! We highlight that here not only for she did contribute, but she willingly made an offering of all that she had. Be reminded that there were two coins in her offering. Some say that according to custom, she could have kept one of the coins! However, this was an example of total dependency and commitment in looking toward God for sustenance and salvation.

Using Metrics?
We must note that Mark addressed this scene in his gospel account to a community of mixed nationality, but one composed mainly of both Jews and Greeks during the later decades of the first century. For the Jews amongst them, the revelation fell very hard against the established hierarchies of their synagogues. The synagogues leaders were often stated to be the true “keepers of the Law”. This meant that synagogue authorities stood faithfully committed to the keeping of the Ten Commandments…. and as those who claimed to follow the Commandments, they were subject to the eternal metric system which measures our “righteousness”.
Therefore, in sight of the Law, the gospel revealed that any Jew who measured themselves accordingly, failed in their keeping of the Law while yet “lording” it over the Greeks and others in the emerging Christian church. They should not seek to keep to the higher seats in the meeting places just because of their Jewish heritage. God’s Law indeed brings all persons low!
We might now consider how this discourse caused apt discomfort and direction within the early church congregations. Could it be that our Lord would rather find us also making a desperate offering, much like the woman spoken of in this lesson? Should we be offering all that we have and ever will be? Was she a symbol of the early church, and thus is still a paradigm for our situation today? I dare respond in the affirmative.
I offer that we are called to place all that we are before God. Please be reminded that the woman placed her existence totally upon the salvation prepared for her by God’s abiding love. I believe that was the point that our Lord originally made, and that was the position expressed amid the early church as it lived through a perilous time.
You see, only our commitment to hearing the full condemnation of the Law… and knowing our shortfall… can bring us to the place of being totally dependent upon divine mercy. Convicted and prostrate in that lowly place in the temple can drive us to the realization that we are really amid the poorest of the poor, having no coinage left to justify ourselves. When we have found the ransom for our salvation is far too great a price for us to pay for our own justification… then we are driven by the Holy Spirit to kneel before God. We then receive the opportunity to seek our salvation through Jesus Christ. That is the method and message being expressed here!
Surely we, as sinful persons in this world who often foolishly admire those who sit with pride, circumstance and folly in the gathering places, need to collectively realize our lowliness. Additionally, we must attempt to grasp the greatness of the One who shed all pretenses to take our place upon the cross of punishment. Our Lord Jesus as our Resurrected Lord, having paid our debt, sits alongside the throne of our Father and Creator. He is our Redeemer who sits by the coffers of our lives… to see just who it is that he knows and has rightly entrusted with his whole-hearted and loving investment. So let us today be determined. Let us grasp the Spirit and dare to put our two cents in… and grow into the fullness of his measure.