OUR READING we offer for the coming Sunday in Christmas from the Gospel According to Saint John. The gospel record begins with a Prologue. Within these introductory words, the divine nature of Jesus as the Word of God was revealed. As we try to wrap our minds around these wondrous thoughts, we are invited to consider how God proceeded to save us through the dual nature of Jesus. John began with... 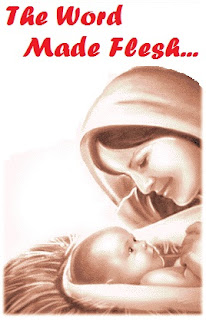 IN THE beginning was the Word, and the Word was with God, and the Word was God.  He was in the beginning with God; all things were made through him, and without him was not anything made that was made.
In him was life, and the life was the light of men. The light shines in the darkness, and the darkness has not overcome it.
There was a man sent from God, whose name was John. He came for testimony, to bear witness to the light, that all might believe through him. He was not the light, but came to bear witness to the light.
The true light that enlightens every man was coming into the world. He was in the world, and the world was made through him, yet the world knew him not. He came to his own home, and his own people received him not. But to all who received him, who believed in his name, he gave power to become children of God; who were born, not of blood nor of the will of the flesh nor of the will of man, but of God.
And the Word became flesh and dwelt among us, full of grace and truth; we have beheld his glory, glory as of the only Son from the Father.  (John bore witness to him, and cried, "This was he of whom I said, 'He who comes after me ranks before me, for he was before me.'")
And from his fullness have we all received, grace upon grace. For the law was given through Moses; grace and truth came through Jesus Christ. No one has ever seen God; the only Son, who is in the bosom of the Father, he has made him known. (John 1:1-18)

An Introduction…
As we look closely to this first chapter of the Gospel According to Saint John, we find an editorial seam between vs.18: and vs.19. This is likely why lectionary planners halted the recommended reading at v.18. The first section, known as the Prologue, performed the same function for ancient readers as a preface or introduction in today’s books. A writer in the church of John, in final edit as claimed by some biblical scholars, likely made profound comments to an earlier manuscript about the meaning of what is going to be encountered by our continuing in the text. After this Prologue section, the historical unfolding of salvation began.
However,.lest we pass over this introductory text too quickly, we need to note that some words echo prominently in our minds. We hear the words... “In the beginning… “ standing out. This phrase pointed hearers backward in time... to the very beginning of all things… when God spoke all of creation into existence.
In referring us to Genesis 1:1, the editor made a connection to the Jewish roots of this gospel message. The words remind the people concerning the creative act of God. The author contended here that the Word which first spoke to will all things into existence was... and is yet… truly God.
Astoundingly however… the Word revealed here in these pages by the community of John,  was described by conversation that unfolded in wondrous prose. Here the Word is described as a person who became flesh. Within those words describing the Word, a miraculous event is revealed. John told of a miraculous event so powerful that our finite scientific and philosophical human constructs fail. I repeat here for emphasis…

“And the Word became flesh and dwelt among us, full of grace and truth; we have beheld his glory, glory as of the only Son from the Father.”

Take special note that John contends, and we of the church echo... that Almighty God became flesh! Thus we have in John’s Prologue a great theological affront to human logic. In human terms, this revelation cannot make sense... yet somehow the Infinite became finite! It’s much like forcing a wagon load of wheat onto a two pound shovel.

Indeed, God had... in Infinite power... made the impossible possible! However, in trying to wrap our sinful and finite minds around these words… we are driven by the Spirit to ask whether God can work that miracle in reverse? For our sake, or for the sake of his Word, will God make the finite Infinite? The answer is important to we sinful and finite human beings seek our Resurrection.
Addressing questions that arise in mind, heart and soul, John through the wisdom of the Holy Spirit gave us answer. We who are his unlearned and finite readers, were given a hint of the expanse of eternal Love…

“And from his fullness have we all received, grace upon grace. For the law was given through Moses; grace and truth came through Jesus Christ.”

We especially note in this quote, the word “grace”. In abundant, grace-filled love provided Resurrection power, God acted in regard to the sin found as enslaving human history. We are set free to rise in Christ. In fullness we have been given grace. We who are finite, have the hope of being alongside the Infinite!

What’s More?
Note in that according to scripture, the Word coming into the world clearly combines two natures into one person. Jesus, was born both human and Divine. He was and yet is both the human being… the Son of God… and the eternal Word of God.
Though Jesus was indeed physically raised by Mary and Joseph and spoke as a young man to the religious of his day… as the Word made flesh he also completed the work of salvation for our sake. Out of divine love, our Creator came to this finite piece of space dust. He was crucified, died and was Resurrected, and now sits at the right hand of God the Father.
Through Jesus, You see, God exercised Infinite Love... for surely God is indeed Infinite Love! To save us while we are still trapped in our sinful and egotistical natures… even those of us who have an unmitigated gall to think that we are the hosts and rulers of this world… may be saved by the gift of grace. We need now to only, and surely accept the Truth! Consequently, we who are drenched in sin and being deceived by an evil adversary are given hope! We, as sinful usurpers need a Savior…  and the Word of God came... born into a Bethlehem manger to save us
You see, we need not entertain and feed a worldly or nature god to get his attention. Almighty God became the Host for us! Jesus Christ our Lord, the Word of God... became finite. He demonstrated that the finite human being may be granted to abide with God! Jesus sacrificed himself upon the cross as payment for our acceptance at the divine feast. Jesus defeated for us the claims of sin and evil… and still works now through His Spirit to empower us to live like we are more than just sinners. Through baptism by the Holy Spirit we are sinners made saints!
As we who are baptized subsequently receive the Sacrament of the Table, we can know that Jesus is certainly the Host of the Holy Meal. He comes directly to us. He provides us with forgiveness by the power of the Spirit. Our Lord so ministers primarily in this way among us today. Jesus provides us with power so that we might tell the good news and bring others to the Feast. This is the undying presence of the Word in our lives and the will of God for all.

Please know that you're invited to view our pastoral Christmas video...

May the Holy Spirit bless you and yours now and forever more.