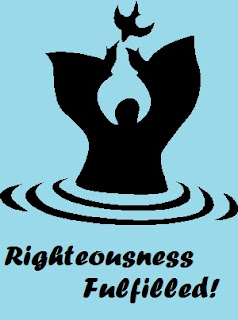 THE BAPTISM OF OUR LORD as told in the Gospel of According to Saint Matthew supplies a reading that shows up in part across all of the synoptic gospels. However, the baptismal scene in Matthew shows us significant priority issues that were present for a particular segment of the early church.

Then Jesus came from Galilee to the Jordan to John, to be baptized by him. John would have prevented him, saying, "I need to be baptized by you, and do you come to me?"
But Jesus answered him, "Let it be so now; for thus it is fitting for us to fulfill all righteousness." Then he consented.

( Note: This last portion of v .14 is found written only in two Italian manuscripts, where it was written… “ and when he was baptized a huge light shone from the water so that all who were near were frightened.”)

And when Jesus was baptized, he went up immediately from the water, and behold, the heavens were opened and he saw the Spirit of God descending like a dove, and alighting on him; and lo, a voice from heaven, saying, "This is my beloved Son, with whom I am well pleased."  (Matthew 3:13-17)

Look This Way…
Though some biblical scholars challenge the historical actuality of this event, I beg to differ with them. We examine this scene from Matthew and note that though not all scriptural accounts agree verbatim, the threefold witness is made concretely as coming from the earliest source in the Gospel According to Saint Mark (c.70A.D.). However, scholarly suspicions arise because the beginning verses of our reading for this week (vss. 13b & 14a), are contained only the Gospel of Matthew. As well, this first text contains a variant reading at the inclusion at vs. 14b, as available from certain minor Latin readings, as quoted in italic print above.
I argue that this latter inclusion seems to symbolically stress the supernatural quality of the historical event. In the variant, we might only ascertain that the later Church simply raised very high the sinless nature of Jesus as he came to the Jordan for baptism. With this historicity in mind, we may then entertain two thoughts as we begin study.

First, we consider that the writer of Matthew gave very high attention to the issue of priority for the two men. The opening words here firmly pronounce which of the two men was of the greatest importance. In the text we note that though Jesus came to John, Jesus was said by John to be the purest personage of the two. Fitting then with Old Testament prophecy, John was classified only as an introducing prophet:

“Behold, I send my messenger to prepare the way before me, and the Lord whom you seek will suddenly come to his temple; the messenger of the covenant in whom you delight, behold, he is coming, says the Lord of hosts.
But who can endure the day of his coming, and who can stand when he appears? "For he is like a refiner's fire and like fullers' soap; he will sit as a refiner and purifier of silver, and he will purify the sons of Levi and refine them like gold and silver, till they present right offerings to the Lord.”  (Malachi 3:1-2)

Therefore, knowing the words of Malachi and accepting them as relevant, we may with the early Church realize that the very presence of this statement in Matthew says the status of John and his followers was at issue. It seemed important enough for the writer of this gospel to take valuable scroll space and insert this scene. Thematically then, it may be said that we humans as usual are sinfully stubborn, because this writing occurred in the 8th decade of the first century, published some 50 years and more after the Resurrection of Our Lord. The controversy was thus still likely at issue for the early Church! Given the present disparities over baptism still present among us today, it seems we have hardly progressed at all.

However, we can agree that the text established firmly for the hearers of the reading, the emergent theology of Matthew’s community during the latter part of the first century. The purity and priority of Jesus was firmly stated by the writing, because John the Baptist himself exclaimed that Jesus was an exception in the matter of both prophetic priority and human purity.

Order Reversal?
Second, yet no less important than establishing the role of both characters, is the direction that Jesus gave to John as to the purpose of continuing the baptismal event. He related that a reversal was in order. Baptism was no longer just for the sake of righteousness. Baptism, as a Jewish purity washing, should be done to Jesus so… “all righteousness should be accomplished”… at a future occurrence! Baptism consequently became an sacred event meant as a preparation, wherein he (and we) are set aside for great heavenly purpose. I hold this up so that we note the word “all”. With these words Jesus changed the very nature of baptism from a personal ritual washing to that which the act becomes for us… a universal, pan-effective act of righteousness accomplished by God. The righteousness is not for Christians to accomplish by our own power, but is an external quality put upon us by God through our submission to baptism.
You see, baptism in water changed in this scene to become an event wherein those deeds that Christ did for us, now allows us forgiveness... so that we may receive the graceful gift of eternal life with God.
Matthew told his churches through this gospel witness, that we who believe are those who receive benefit from this act as established by the Son of God. Baptism was therefore changed from a mere physical event...to a combined physical and spiritual experience that our words cannot fully describe, nor our minds explain.
We rightly observe that the occasion of Jesus’ baptism derived its fullest meaning with the death and Resurrection of the pure person of the Christ. Jesus Christ is the one and the same person who received Holy Baptism for us and who completed a blessed exchange upon the cross. He took the punishment for our sinfulness and because of his baptism also gave us divine purity and innocence. In this completing the task… our Lord is definitely our Savior, and at Pentecost our Lord rained upon us the spiritual cleansing “fire” provided through the Holy Spirit.

Water World Upside Down!
This blessed exchange was stated as growing from the described scene at the banks of the Jordan, We note that Jesus, who would soon be identified with sinners according to the Law... even while yet sinless... was cleansed in eternal fashion by baptism. Therefore, our Lord's divine presence changed the water ritual into a Sacrament that is always effective for us. As believers we know that through this event, coupled with his crucifixion and Resurrection, we and our sinfulness were thereby drowned.
We notice that almost immediately the Holy Spirit bore witness to the glorious event. A dove descended, pointing out to all observers and hearers of the emergence of grace that had been present from the very beginnings of creation. We derive this baptismal everlasting grace meaning as we see that in the beginning the Holy Spirit of God moved over the face of the waters (Genesis 1:2), and a dove was sent by Noah out to find safety (Genesis 8:8).
Thus referring us to the baptismal water by the very presence of imagery, we too are invited to share what the people of the early Church recalled. God identified Jesus as his “Beloved Son”, and we note that “beloved” may also be interpreted as “chosen”. This Jesus was and yet is God’s only begotten Son, and he was chosen to deliver God’s people through baptismal faith.

However, we note also that Mark and Luke differed from this chorus of Matthew's witness. Each used the text that God had pronounced, “...with you I am well pleased”; whereas, Matthew related, “with whom I am well pleased.” Though seeming minor, the object of the conversation was a noticeably different in Matthew.
In Mark’s telling, and the Lukan similarities, these words were spoken to Jesus. However, in Matthew it seems that God addressed not just Jesus, but the community gathered… as a testimony. I offer that this slight variant provides weight to my argument that the writer of Matthew emphasized priority and purity upon Jesus. God’s voice in Matthew forcefully spoke about Jesus to the Church. The scene emphasis switched from Jesus to include the people watching the baptism... and through Matthew's written words... emphasis falls upon us. From this reading, therefore, we in the modern Church know that John baptized (washed) his followers as an act of ritual purification according to the Law. Thus we are also informed that we who are condemned by our sinful impurity are not left adrift to do our own dirty laundry. Though we may wash our hands and more on the outside for cleanliness, we must also be washed by baptism through the Spirit so that we are forgiven in the depths of spirit. Baptism changed... made for us to be a similar, yet different event…. a more certain event.

Indeed John the Baptist was a predecessor prophet. His actions dealt with sinfulness of his Jewish people according to the Law. Properly the Hebrew rites of water purification were performed. Sacrifices could be purchased and these were offered for the forgiveness of sin. However, upon Jesus participation in the baptismal event on that wondrous day, Matthew spoke that his appearance before John at the banks of the Jordan provided fulfillment of the Law.
From John the Baptist we then hear that the graceful good news of righteousness may soon be proclaimed. Consequently in a blessed exchange that was planned from the very beginnings of creation, Father, Son and Holy Spirit reached into our disobedient and sinful world. Jesus came to save us from the penalty of deserved death.
Our Lord’s baptism was a first earthly step taken by Jesus toward working our salvation. Today we may be uplifted in knowing that through his baptism by John, our Lord Jesus began his work. Later, by his death and Resurrection he rightly completed that redemptive work. This is evidenced with certainty by his words that were spoken upon the cross. Our Lord said… “It is finished.” Thus the purity and purpose of Jesus Christ became our justification eternally before God. Lifted up now by such wondrous wisdom and power, we Christians may echo across the centuries from the Church of Matthew… “Thanks be to God!”