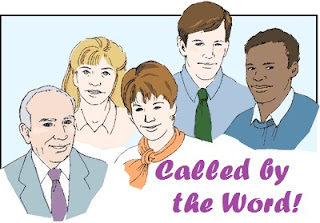 THE READING for the Second Sunday of Epiphany is given to us from the Gospel According to Saint John. With descriptive intent the writer related not only the Baptism of Our Lord Jesus, as we recentyl studied in last week’s Matthew’s gospel, but also offered here is an account of the calling of the first disciples. It is upon this latter portion of the message that we especially concentrate.

The next day he saw Jesus coming toward him, and said, "Behold, the Lamb of God, who takes away the sin of the world! This is he of whom I said, 'After me comes a man who ranks before me, for he was before me.'  I myself did not know him; but for this I came baptizing with water, that he might be revealed to Israel."
And John bore witness, "I saw the Spirit descend as a dove from heaven, and it remained on him. I myself did not know him; but he who sent me to baptize with water said to me, 'He on whom you see the Spirit descend and remain, this is he who baptizes with the Holy Spirit.'  And I have seen and have borne witness that this is the Son of God."
The next day again John was standing with two of his disciples; and he looked at Jesus as he walked, and said, "Behold, the Lamb of God!"
The two disciples heard him say this, and they followed Jesus. Jesus turned, and saw them following, and said to them, "What do you seek?" And they said to him, "Rabbi" (which means Teacher), "where are you staying?"
He said to them, "Come and see." They came and saw where he was staying; and they stayed with him that day, for it was about the tenth hour.
One of the two who heard John speak, and followed him, was Andrew, Simon Peter's brother. He first found his brother Simon, and said to him, "We have found the Messiah" (which means Christ). He brought him to Jesus. Jesus looked at him, and said, "So you are Simon the son of John? You shall be called Cephas" (which means Peter). (John 1:29-42)

In Retrospect…
Our gospel writer takes readers and listeners quickly from the profound revelation stated in the beginning Prolog of this gospel... that God has become one of us... to the Baptism of Our Lord. In baptism, Jesus was empowered toward his mission… and went onward in the calling of the first apostles. Be aware of the subtle importance here, the community of readers of this gospel received great guidance. In right sequence they heard that we are created, empowered and finally called. John the Baptizer clearly described in that he was only following divine instructions. Our focus then is brought to more properly gaze upon the person of Jesus and the steps that our Lord accomplished.
Blatantly, the writer of this gospel doubly emphasized that John the Baptist removed himself from any claim to religious leadership. Thus the writer flatly dismissed any historic arguments that John’s followers could possibly have used in claiming the mantle of Messiah for their prophet. John the Baptist preached repentance, and baptized the people with water as a profession of their yearly cleansing from sin. Then suddenly the Messiah, the Christ of God was in the midst of them, even though they did not know him.


Consequently, setting that contrast, the writer showed the glaring chasm that exists between the human prophet and the glory of the revealed God. The very next day, the John the Baptist pointed his followers beyond himself to the One who had come. Therefore, by John the Baptist’s pronouncement, Jesus was firmly identified to his listeners as the Paschal Lamb, a sacrifice to be made so that in the shedding and sprinkling of his blood, the eating of his flesh, and all the other circumstances of the Law fulfilled, he would make good the redemption necessary for repentant sinners.

Relative Equality!
In the calling of the disciples that comes afterward, we note the artistry with which the writer was guided by the Holy Spirit. At first, the two men who followed Jesus are not named. We might wonder if this was done lest any of the two should later boast. Being sinful ourselves we can see that the author sidestepped a retroactive slide into sinful claims. Are we not found just so? We recall that we are too often like spiritual tussling siblings such as Isaac and Ishmael… the children of Abraham and Sarah whose descendants yet roll about in spirit crying, “Me first, Me first!” If only our Christian denominations could see their sins and appreciate this lack of priority.


The writer eventually informs us that one of the two disciples was the man named Andrew. Thus this wonderful text secondarily revealed truly the identity of the first apostolic Christian evangelist. Without exclamatory emotion, Andrew quietly told his brother Simon, “We have found the Messiah.”
With quiet certainty,,, the Truth, who is Christ Jesus… was revealed to Simon. As hearers and readers today, therefore, we also are set in scripture to hear that Truth. We come to gradually understand that we and all the world should hear. And so it began… without primacy, nor pomp. The revelation was firmly made so that Simon followed his brother to meet the Teacher.

Foundation for the Church
The author related that Jesus responded to Simon's arrival without hearing his name. Jesus already knew of him and his name. We must thus ask ourselves, “Was it because earlier Andrew spoke to Jesus about his brother, just as we might pray about members of our earthly families not yet being seen in church? Or was it immediate recognition from our Savior about the chosen nature of Simon?
In any case this selection of Andrew, and then Simon, is paramount for us. We note some linguistic nuance. Simon's name, though common, carried the Hebrew meaning: "He who has heard or hears (the word of God)". Therefore, we read of Simon as led by hearing. Andrew brought him certainly to hear the Word.., the One who was, and is God forevermore. In that moment Simon was solidly changed for all eternity. Jesus eventually named him “Peter”.., which means the “Rock”.

That the author of this gospel related to us the intent of Jesus, as the Author of all creation, within this simple name change is evident. The faith given to Peter was indeed profound. The faith given to him was felt deep enough to carry him even through his own denial… and was passed on eternally in his witness to the early Church.
The prevailing good news to the Church today, through both the writer of this gospel, and Peter, is that we are established immovably to follow Christ, for it is through faith in Christ alone that the effect of our sin is removed. Through the sacrifice of the Lamb of God, we are reconciled to God Almighty.

Jesus first asked, “What do you seek?” The seemingly simple question Jesus put to those first apostles, and to us today, and shall confront those yet to come. The question is paramount. Jesus invites us to come to Him without delay. As scripture related to us through St. Paul, “Now is the accepted time”.
We are much like the first apostles, because we… as disciples who accept the gift… are soon taught to seek the spiritual welfare of those around us… so that all may know our Lord. Those who come to receive Christ shall, like ourselves, certainly be changed.


Know this, blessed disciples! The power of evil and sinfulness shall not prevail. We are called today like our predecessors in the faith, presenting ourselves to the Lord as sinners made saints. Like flawed, precious stones, we have distinct pleasure in that the cleansing waters of Holy Baptism flow over us. Through the Holy Spirit, using the Holy Word... God lifts us out of evil mud and chaos, forms us, conditions us… and polishes us. In that way alone we are rendered solid and steadfast. Though we often feel that we are just nuggets in the eternal flow… we are even yet made a rock that sparkles brightly in the stream of Life. Keep in mind, however, it is only by God’s grace that we are made so.

Please know that you are invited to watch this personal video...

More Than Just Water: May your answering of the call of God through His Word, bring you closer to that path upon which you are to walk in faith.