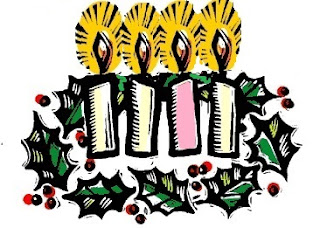 ON THE Fourth Sunday of Advent we hear the Gospel According to Saint Luke. As drawn likely from both oral and written sources, our writer sheds singular light on the conversation that occurred when our Lord’s mother, Mary... traveled to visit with Elizabeth. This scripture segment revealed the future relationship that unfolded between Jesus and his cousin, John the Baptist…

In those days Mary arose and went with haste into the hill country, to a city of Judah, and she entered the house of Zechariah and greeted Elizabeth. And when Elizabeth heard the greeting of Mary, the babe leaped in her womb; and Elizabeth was filled with the Holy Spirit and she exclaimed with a loud cry, “Blessed are you among women, and blessed is the fruit of your womb!
And why is this granted me, that the mother of my Lord should come to me?
For behold, when the voice of your greeting came to my ears, the babe in my womb leaped for joy. And blessed is she who believed that there would be a fulfillment of what was spoken to her from the Lord.”
And Mary said,
“My soul magnifies the Lord,
and my spirit rejoices in God my Savior,
for he has regarded the low estate of his handmaiden.

For behold, henceforth all generations will call me blessed;
for he who is mighty has done great things for me,
and holy is his name.

And his mercy is on those who fear him
from generation to generation.

He has shown strength with his arm,
he has scattered the proud in the imagination of their hearts,
he has put down the mighty from their thrones,
and exalted those of low degree;
he has filled the hungry with good things,
and the rich he has sent empty away.

He has helped his servant Israel,
in remembrance of his mercy,
as he spoke to our fathers,
to Abraham and to his posterity forever.”

And Mary remained with her about three months, and returned to her home.
(Luke 1:39-56)

Announced to Pronounced
Our author immediately settled his readers in progression from the Annunciation, wherein Mary had learned from the angel that she was to be with child, to focusing upon the eternally planned birth of our Lord. By doing so, this writing placed the birth of Jesus firmly within the religious realm of the writer's own day. Through the text, likely crafted by the early Church during a decade some fifty years after the actual occurrence, we see that the birth of Jesus was firmly anchored prophetically by Jewish prophecy. The reading also reinforces our Lord’s leadership and his relationship to John the Baptist, one which had been contested somewhat during the first century.

Nazareth to Bethlehem
Formed by the Holy Spirit, the witness of Luke thus tells of Mary’s leaving her family’s town of residence, to reside for a time with a relative named Elizabeth, the wife of the priest Zecharias. The familial relationship between the two women is not clearly made by scripture. Though it is possible that Mary was Elizabeth’s cousin, given age differences, it is my opinion that Elizabeth may have been Mary’s aunt. In either case, our Lord’s mother was sent there to reside as her pregnancy went beyond the first trimester. The physical showing of the child would be detectable by the townspeople of Nazareth. Cloistered at her relative’s home, she could eventually return to Nazareth in marriage to Joseph. In revelation then, I believe that the sequence of events and their timing remains secondary however to the purposes of Luke’s witness.  The story was likely passed along by Luke and used to historically solidify the belief that the birth of our Lord was predetermined by God, and his position in hierarchy had been eternally guaranteed.
As evidenced here concerning the prophetic, it is submitted that the words of the poetic section called the Magnificat, closely mirrors those found for centuries in the Jewish scriptures. The song was recorded as the birth poem of Hannah, the mother of the prophet Samuel.

Hannah also prayed and said,
“My heart exults in the Lord;
my strength is exalted in the Lord.
My mouth derides my enemies,
because I rejoice in thy salvation.
“There is none holy like the Lord,
there is none besides thee;
there is no rock like our God.

Talk no more so very proudly,
let not arrogance come from your mouth;
for the Lord is a God of knowledge,
and by him actions are weighed.

The bows of the mighty are broken,
but the feeble gird on strength.
Those who were full have hired themselves out for bread,
but those who were hungry have ceased to hunger.

The barren has borne seven,
but she who has many children is forlorn.
The Lord kills and brings to life;
he brings down to Sheol and raises up.

The Lord makes poor and makes rich;
he brings low, he also exalts.
He raises up the poor from the dust;
he lifts the needy from the ash heap,
to make them sit with princes
and inherit a seat of honor.

For the pillars of the earth are the Lord’s,
and on them he has set the world.
“He will guard the feet of his faithful ones;
but the wicked shall be cut off in darkness;
for not by might shall a man prevail.

The adversaries of the Lord shall be broken to pieces;
against them he will thunder in heaven.
The Lord will judge the ends of the earth;
he will give strength to his king,
and exalt the power of his anointed.”
(1 Samuel 2:1-10)

Using solid progression from the Hebrew scriptures then, Luke presented a divine announcement in the doings of humanity. First we read that an angel had told Zecharias that his elderly wife Elizabeth was to be with child. This pronouncement rings similarly to an angel’s message to Abraham’s wife Sarah. Thus a first reference to traditional Judaism appeared. Next then, the angel or messenger of the Lord told Mary that she was to give birth in spite of the fact that she had not been sexually active with a man. Though barely fourteen years in age, the words she pronounced in response were also rooted in scripture. Finally, this poetic Magnificat section provided a third scriptural leg in a solid seat for the witness concerning the person of Jesus, who is the Christ of God.
Finally... we notice that a note of prophetic recognition had been subtly presented by Luke. This had occurred as Elizabeth felt her baby leap in her womb. This action by yet-to-be born John, often termed as the “quickening”, related that when Mary made the announcement the prophetic Spirit was already present in the life of the unborn child.
The powerful presence of that same Spirit encased in scripture caused the poetic outburst of Mary, and recalled for the later community of Luke the testimony of Elizabeth. They became evidence for persons in his communities that Jesus was indeed born as the Christ, the Messiah of God. Jesus was the Anointed One. John then, by his own recognition in the womb, had historically given evidence of our Lord’s priority. As well, the instance gives to us scriptural evidence once again that God shall give faith as a gift to whomever he shall choose… whenever he chooses… even to those who are not yet born.

From Faith unto Faith…
As we consider this wondrous scene presented to the early churches, we need remember that these communities were those that were under siege since the days of the Resurrection until the writing of Luke’s gospel in approximately 85 A.D. and beyond. Thus we know that the time for oral development of this story spanned an era from the ruling of Roman’s Caesar Augustus through to the rule of the later Vespasian. Within that time frame, the story was clearly presented by many witnesses about the gift of faith, given to the Church just as by the Holy Spirit at the Feast of Pentecost. Thus we can clearly comprehend that we today inherit faith just as the infant to be named John was empowered. John, prompted by the Spirit while yet an infant, leaped for joy at the Good News provided by Mary. In joy also then we now have knowledge that we receive the same gift given in the same way. Note that through the waters of Holy Baptism like the waters of Elizabeth’s womb, the Spirit is freely given to us as a gift. Therefore, we who read this story from those hallowed pages are persons who now nest comfortably near the womb of the Church during the season of Advent. We become roused to recognition, and the remembrance of eternal life made possible by the presence of our Lord sent into the world.
Blessed ones, consider this! Any who are baptized similarly to the temporal washing that was done by John in the Jordan River, are now baptized and cleansed in forgiveness through Christ Jesus by water and the Holy Spirit. We are given to eternally recall that Jesus is the Christ of God. Jesus was and yet is the Sent One appointed. His task was set before him by the Father from the foundation of all creation. Jesus was born, baptized by John and once raise up as an adult... died for us, to set us free from the power of sin and evil. Thus it is, we of the Church prepare for our own Christmas celebrations. I ask that we be like Mary… to ponder and pray in these last days… think deeply concerning these things.
Visit Pastor's Website!
For as it was written by Saint Paul…

First of all, then, I urge that supplications, prayers, intercessions, and thanksgivings be made for all men, for kings and all who are in high positions, that we may lead a quiet and peaceable life, godly and respectful in every way. This is good, and it is acceptable in the sight of God our Savior, who desires all men to be saved and to come to the knowledge of the truth. For there is one God, and there is one mediator between God and men, the man Christ Jesus, who gave himself as a ransom for all, the testimony to which was borne at the proper time.
(1 Timothy 2:1-6)

In keeping with this prayerful request for a peaceful season, please know that you are invited to view this video…

May the Peace of God, which surpasses all human understanding, keep your hearts and minds in Christ Jesus, our Lord.