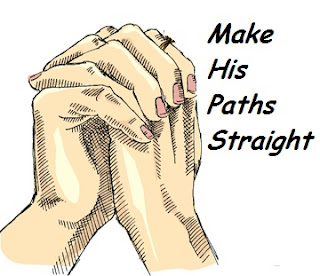 UPON THIS Second Sunday in Advent, we shall hear from the Gospel According to Saint Luke. The text concerns the message of John the Baptist. We hear his words concerning a great leveling of the sinful before God and our resultant need to be cleansed. For this reason John baptized in water to wash the people in preparation, however with the usual temporal results. The text reveals that only through Jesus, God came to baptize us for eternity with water and the Spirit.

In the fifteenth year of the reign of Tiberius Caesar, Pontius Pilate being governor of Judea, and Herod being tetrarch of Galilee, and his brother Philip tetrarch of the region of Ituraea and Trachonitis, and Lysanias tetrarch of Abilene, in the high-priesthood of Annas and Caiaphas, the word of God came to John the son of Zechariah in the wilderness; and he went into all the region about the Jordan, preaching a baptism of repentance for the forgiveness of sins.
As it is written in the book of the words of Isaiah the prophet..,

“The voice of one crying in the wilderness:
Prepare the way of the Lord,
make his paths straight.

Every valley shall be filled,
and every mountain and hill shall be brought low,
and the crooked shall be made straight,
and the rough ways shall be made smooth;
and all flesh shall see the salvation of God.”

Regular Ritual!
Having inherited ritualistic practices from their faith ancestors, the religious Jews performed annual purification, They did this through ritual cleansing of temples, households and personal washing. However, the problem for God lay in that they remained sinful internally, and thus repeatedly had to scrub themselves. Being mutually human with them, therefore, both they and we are continually offending God.
In the waters of the Jordan, in an area often referred to as the wilderness, the prophet called people to express sorrow over their sins. He warned them to do proper full immersion cleansing. As we notice however, the action the son of the priest Zachariah called for was not just meant for the proper cleaning of household and personal items... designed just to keep a people physically healthy while traveling through life… but was to be a ritual done fully for spiritual forgiveness. Baptism in the Jordan was therefore a highly symbolic act for a person. It called the people of Israel to remember that an internal change was needed. Like washing a chalkboard before class time in an already clean school room, this spiritual cleansing was needed in order to know the Word and restore the Hebrew nation.
Driven by the Holy Spirit then, it seems that John in his prophetic role wished to restore the Jews to the purest condition humanly possible before God, leveling them before divine royalty by asking them to recognize their corporate and individual need. As written by the prophet…

“Behold, I send my messenger to prepare the way before me, and the Lord whom you seek will suddenly come to his temple; the messenger of the covenant in whom you delight, behold, he is coming, says the Lord of hosts.
But who can endure the day of his coming, and who can stand when he appears?
For he is like a refiner’s fire and like fullers’ soap; he will sit as a refiner and purifier of silver, and he will purify the sons of Levi and refine them like gold and silver, till they present right offerings to the Lord. Then the offering of Judah and Jerusalem will be pleasing to the Lord as in the days of old and as in former years.” (Malachi 3:1-4)

Luke therefore stated clearly to his churches that John referred them to prophetic traditions to justify his baptizing. John reminded that the Jewish nation had been called to be clean. They were not so inclined. He wished to accent that a return was needed. His prophetic voice was raised loudly against the apostate travesty of priests who had been merely turning the coin purses of the people inside out for cleaning, rather than recognizing their responsibility before God to keep the nation and its peoples refined and pure.

Receiving these traditions, we see that Luke echoed this message to the early Church, and now it comes time for us to realize that we follow in their footsteps. Referring to him, not as "the Baptist", Luke presented John as the son of the priest Zechariah. Therefore according to Luke, by inheritance, John was one who had been called as an authority to speak to the synagogues, and he yet raises alarm in the Church.
John the Baptist, though an unruly character, had been gracefully given prophetic voice. As such, he calls sinners toward repentance... and in priestly fashion presented an offering for the restoration of Israel. John did so in voice, and then made a right physical offering as it became evident that he baptized Jesus. He washed our Lord by full immersion in the waters of the Jordan, cleaning the One who needed no cleaning... and thus preparing the divine scapegoat.
You see, in the Baptism of our Lord a great change took place. Jesus, the cousin of John, was indeed a fully human person cited by God as the only Son. John thus testified that Jesus was the sinless one to redeem Israel, saving anyone who would believe in his great work. Therefore all that was needed for salvation was repentance and receiving of a believing faith.

Baptism loomed large, especially for the church of Luke which welcomed many persons who were not Jews. The Gentiles from the nations of Rome, Greece and other locations were not usually knowledgeable members of synagogue communities. They came to know their sinfulness, but likely did not know that though there were mandates for ritual cleanliness and dietary restrictions which were important as laudable expressions of the Jewish faith… these could not do right actions to eternally save anyone. No person, Jew or Gentile... could be washed clean enough to pass muster. Thus Luke revealed that anyone who accepted faith in Jesus, was to be included just as those Jews who could profess Jesus is the Prophet, Priest and King sent by God. Luke revealed thus to all that because of their sin and distance from God, for forgiveness Jesus had offered himself up as a sacrifice. He was given over by God to save those who would bow in sorrow about their disobedience to the Commandments, and would seek salvation in God's Sent One... Jesus Christ our Lord..

Winding Road or Turnpike?
What should we who live today recover when we recall this message during Advent? I say that first we need to understand the substitution done here. The Son of God was sent to save us. Let us not entertain the driven holiday need for a mandatory annual washing of ourselves and our belongings as our salvation. We need not make our approaching Christmas season a time of ritualistic slavery. Let us simply recall that while cleanliness is good, baptism is eternal!
Take heed that many in the army of persons who have gone before us in Christ have taught us that we are much like a legion dipping our army mess kits in a boiling pot, By doing so, we temporarily will rid our eating utensils of sinful organisms that cause many ills, but we also should realize that the action does not affect the evil abiding within our hearts.
Click Here For Pastor's Site!
Take note that the Church found through this witness that only baptism into Christ Jesus, a baptism both of water and the Holy Spirit… provides us with absolute cleanliness. Confession of sins and baptism into Christ Jesus provides us with forgiveness of sin through and through... and provides us with a oneness with our Lord in the kingdom of God. This good news empowers us as yet committing sin.... to grow into what we already have been baptized to be... saints marching toward the heavenly realm. This is the message that our gospel writer revealed to us by the power of the Spirit... so that the faith of the true Church shall be among us. Let this be so today... for the coming Christmas season and beyond.
Please be invited to view this pastoral video...
Old Time Religion!